Large fish traps in the Persian Gulf could be catching up to six times more fish than what’s being officially reported.

Large fish traps in the Persian Gulf could be catching up to six times more fish than what’s being officially reported, according to the first investigation of fish catches from space conducted by University of British Columbia scientists.

Using satellite imagery from Google Earth, UBC researchers estimated that there were 1,900 fishing weirs along the coast of the Persian Gulf during 2005 and that they caught approximately 31,000 tonnes of fish that year. The official number reported by the seven countries in the region to the United Nation’s Food and Agriculture Organization was 5,260 tonnes. The study was published today in the ICES Journal of Marine Science.

Fishing weirs are semi-permanent traps that take advantage of tidal differences to catch a wide variety of marine species. Used in Southeast Asia, Africa and parts of North America, some weirs can be more than 100 metres long.

“This ancient fishing technique has been around for thousands of years,” says Dalal Al-Abdulrazzak, a PhD student with the UBC Fisheries Centre’s Sea Around Us Project and the study’s lead author. “But we haven’t been able to truly grasp their impact on our marine resources until now, with the help of modern technology.” 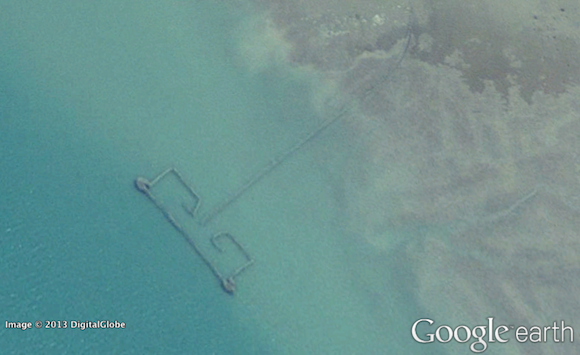 The study shows the potential for using remote-sensing approaches, such as satellite imagery, to validate catch statistics and fisheries operations in general.

“Time and again we’ve seen that global fisheries catch data don’t add up,” says Daniel Pauly, principal investigator with the Sea Around Us Project and the study’s co-author. “Because countries don’t provide reliable information on their fisheries’ catches, we need to expand our thinking and look at other sources of information and new technologies to tell us about what’s happening in our oceans.”

The full study can be found here

Via The University of British Columbia