Around many types of stars, distant gas-giant planets are rare and prefer to cling close to their parent stars. The impact on theories of planetary formation could be significant.

Finding extrasolar planets has become so commonplace that it seems astronomers merely have to look up and another world is discovered. However, results from Gemini Observatory’s recently completed Planet-Finding Campaign – the deepest, most extensive direct imaging survey to date – show the vast outlying orbital space around many types of stars is largely devoid of gas-giant planets, which apparently tend to dwell close to their parent stars.

“It seems that gas-giant exoplanets are like clinging offspring,” says Michael Liu of the University of Hawaii’s Institute for Astronomy and leader of the Gemini Planet-Finding Campaign. “Most tend to shun orbital zones far from their parents. In our search, we could have found gas giants beyond orbital distances corresponding to Uranus and Neptune in our own Solar System, but we didn’t find any.” The Campaign was conducted at the Gemini South telescope in Chile, with funding support for the team from the National Science Foundation and NASA. The Campaign’s results, Liu says, will help scientists better understand how gas-giant planets form, as the orbital distances of planets are a key signature that astronomers use to test exoplanet formation theories. 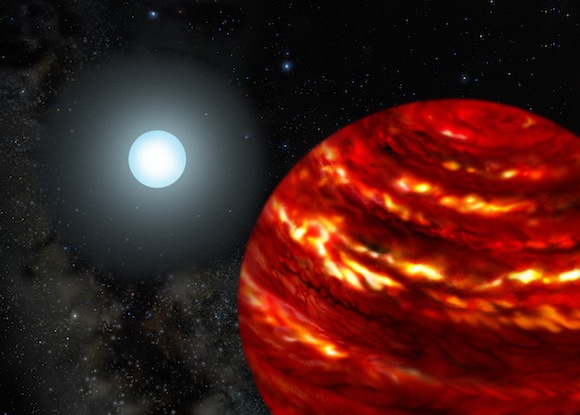 Artist’s rendering of a possible exoplanetary system with a gas-giant planet orbiting close to his parent star which is more massive than our sun. Artwork by Lynette Cook. Credit: Gemini Observatory/AURA

Eric Nielsen of the University of Hawaii, who leads a new paper about the Campaign’s search for planets around stars more massive than the Sun, adds that the findings have implications beyond the specific stars imaged by the team. “The two largest planets in our Solar System, Jupiter and Saturn, are huddled close to our Sun, within 10 times the distance between the Earth and Sun,” he points out. “We found that this lack of gas-giant planets in more distant orbits is typical for nearby stars over a wide range of masses.”

Two additional papers from the Campaign will be published soon and reveal similar tendencies around other classes of stars. However, not all gas-giant exoplanets snuggle so close to home. In 2008, astronomers using the Gemini North telescope and W.M. Keck Observatory on Hawaii’s Mauna Kea took the first-ever direct images of a family of planets around the star HR 8799, finding gas-giant planets at large orbital separations (about 25-70 times the Earth-Sun distance). This discovery came after examining only a few stars, suggesting such large-separation gas giants could be common. The latest Gemini results, from a much more extensive imaging search, show that gas-giant planets at such distances are in fact uncommon.

Liu sums up the situation this way: “We’ve known for nearly 20 years that gas-giant planets exist around other stars, at least orbiting close-in. Thanks to leaps in direct imaging methods, we can now learn how far away planets can typically reside. The answer is that they usually avoid significant areas of real estate around their host stars. The early findings, like HR 8799, probably skewed our perceptions.”

The team’s second new paper explores systems where dust disks around young stars show holes, which astronomers have long suspected are cleared by the gravitational force of orbiting planets. “It makes sense that where you see debris cleared away that a planet would be responsible, but we did not know what types of planets might be causing this. It appears that instead of massive planets, smaller planets that we can’t detect directly could be responsible,” said Zahed Wahhaj of the European Southern Observatory and lead author on the survey’s paper on dusty disk stars. Finally, the third new paper from the team looks at the very youngest stars close to Earth. “A younger system should have brighter, easier to detect planets,” according to the lead author Beth Biller of the Max Planck Institute for Astronomy.

“Around other stars, NASA’s Kepler telescope has shown that planets larger than the Earth and within the orbit of Mercury are plentiful,” explains Biller. “The NICI Campaign demonstrates that gas-giant planets beyond the distance of the orbit of Neptune are rare.” The soon-to-be-delivered Gemini Planet Imager will begin to bridge this gap likely revealing, for the first time, how common giant planets are in orbits similar to the gas-giant planets of our own Solar System.

The observations for the Campaign were obtained with the Gemini instrument known as NICI, the Near-Infrared Coronagraphic Imager, which was the first instrument for an 8-10 meter-class telescope designed specifically for finding faint companions around bright stars. NICI was built by Doug Toomey (Mauna Kea Infrared), Christ Ftaclas, and Mark Chun (University of Hawai‘i), with funding from NASA.

The first two papers from the Campaign have been accepted for publication in The Astrophysical Journal (Nielsen et al. and Wahhaj et al.), and the third paper (Biller et al.) will be published later this summer.