The fruit fly study adds to the evidence “that using toxins in the environment to medicate offspring may be common across the animal kingdom,” says biologist Todd Schlenke.

When fruit flies sense parasitic wasps in their environment, they lay their eggs in an alcohol-soaked environment, essentially forcing their larvae to consume booze as a drug to combat the deadly wasps.

The discovery by biologists at Emory University is being published in the journal Science on Friday, February 22.

“The adult flies actually anticipate an infection risk to their children, and then they medicate them by depositing them in alcohol,” says Todd Schlenke, the evolutionary geneticist whose lab did the research. “We found that this medicating behavior was shared by diverse fly species, adding to the evidence that using toxins in the environment to medicate offspring may be common across the animal kingdom.” 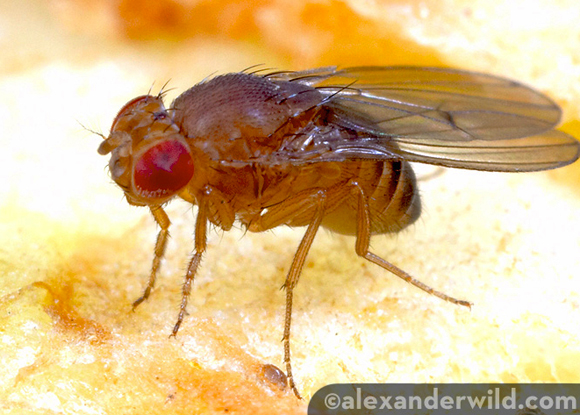 Adult fruit flies detect the wasps by sight, and appear to have much better vision than previously realized, he adds. “Our data indicate that the flies can visually distinguish the relatively small morphological differences between male and female wasps, and between different species of wasps.”

The experiments were led by Balint Zacsoh, who recently graduated from Emory with a degree in biology and still works in the Schlenke lab. The team also included Emory graduate student Zachary Lynch and postdoc Nathan Mortimer. 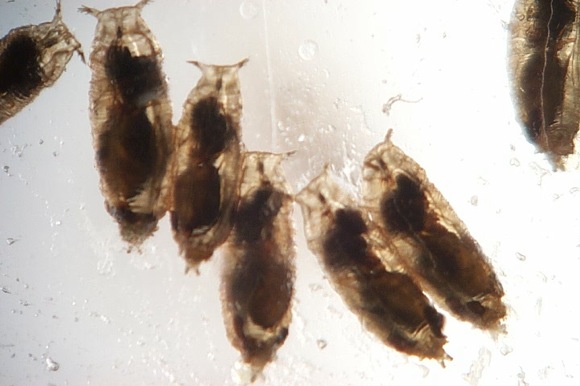 Adult wasps are about to emerge from fruit fly pupae, above, after eating the fruit fly larvae from the inside out. Photo by Todd Schlenke.

The larvae of the common fruit fly, Drosophila melanogaster, eat the rot, or fungi and bacteria, that grows on overripe, fermenting fruit. They have evolved a certain amount of resistance to the toxic effects of the alcohol levels in their natural habitat, which can range up to 15 percent.

Last year, the Schlenke lab published a study showing how fruit fly larvae infected with wasps prefer to eat food high in alcohol. This behavior greatly improves the survival rate of the fruit flies because they have evolved high tolerance of the toxic effects of the alcohol, but the wasps have not.

“The fruit fly larvae raise their blood alcohol levels, so that the wasps living in their blood will suffer,” Schlenke says. “When you think of an immune system, you usually think of blood cells and immune proteins, but behavior can also be a big part of an organism’s immune defense.” 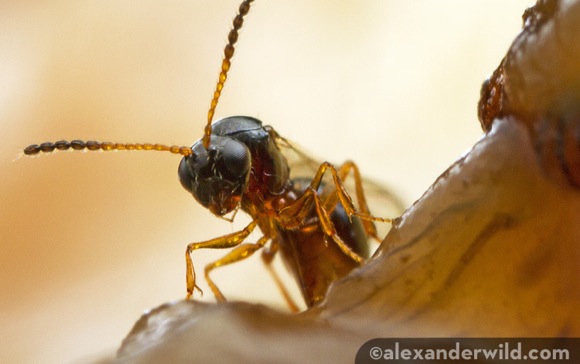 A female parasitic wasp, on the prowl for fruit fly larvae to inject with her eggs.

For the latest study, the researchers asked whether the fruit fly parents could sense when their children were at risk for infection, and whether they then sought out alcohol to prophylactically medicate them.

The fly strains used in the experiments have been bred in the lab for decades. “The flies that we work with have not seen wasps in their lives before, and neither have their ancestors going back hundreds of generations,” Schlenke says. “And yet, the flies still recognize these wasps as a danger when they are put in a cage with them.”

Further experiments showed that the flies are extremely discerning about differences in the wasps. They preferred to lay their eggs in alcohol when female wasps were present, but not if only male wasps were in the cage.

heorizing that the flies were reacting to pheromones, the researchers conducted experiments using two groups of mutated fruit flies. One group lacked the ability to smell, and another group lacked sight. The flies unable to smell, however, still preferred to lay their eggs in alcohol when female wasps were present. The blind flies did not make the distinction, choosing the non-alcohol food for their offspring, even in the presence of female wasps.

“This result was a surprise to me,” Schlenke says. “I thought the flies were probably using olfaction to sense the female wasps. The small, compound eyes of flies are believed to be more geared to detecting motion than high-resolution images.”

The only obvious visual differences between the female and male wasps, he adds, is that the males have longer antennae, slightly smaller bodies, and lack an ovipositor.

Further experimentation showed that the fruit flies can distinguish different species of wasps, and will only choose the alcohol food in response to wasp species that infect larvae, not fly pupae. “Fly larvae usually leave the food before they pupate,” Schlenke explains, “so there is likely little benefit to laying eggs at alcoholic sites when pupal parasites are present.”

The researchers also connected the exposure to female parasitic wasps to changes in a fruit fly neuropeptide.

“We found that when a fruit fly is exposed to female parasitic wasps, this exposure reduces the level of NPF in the fly brain, causing the fly to seek out alcoholic sites for oviposition,” Schlenke says. “Furthermore, the alcohol-seeking behavior appears to remain for the duration of the fly’s life, even when the parasitic wasps are no longer present, an example of long-term memory.”

Finally, Drosophila melanogaster is not unique in using this offspring medication behavior. “We tested a number of fly species,” Schlenke says, “and found that each fly species that uses rotting fruit for food mounts this immune behavior against parasitic wasps. Medication may be far more common in nature than we previously thought.”