Scientists at Columbia University and the National Center for Atmospheric Research (NCAR) have announced a new system that adapts techniques used in modern weather prediction to generate local forecasts of seasonal influenza outbreaks. By predicting the timing and severity of the outbreaks, the system can eventually help health officials and the general public better prepare for them. 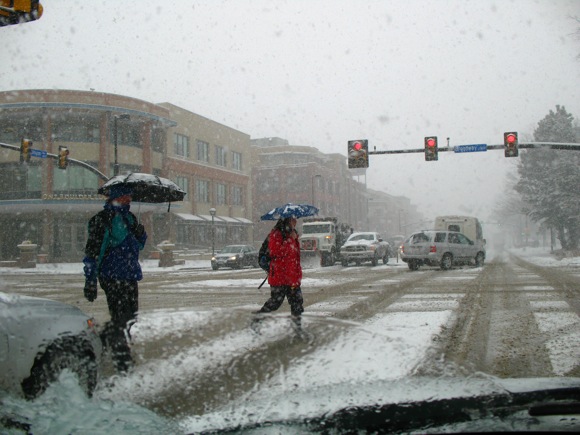 From year to year, and region to region, there is huge variability in the peak of flu season, which can arrive in temperate areas of the Northern Hemisphere as early as October or as late as April. The new forecast system can provide “a window into what can happen week to week as flu prevalence rises and falls,” says lead author Jeffrey Shaman, an assistant professor of Environmental Health Sciences at Columbia’s Mailman School of Public Health.

In previous work, Shaman and colleagues had found that wintertime U.S. flu epidemics tended to occur following very dry weather. Using a prediction model that incorporates this finding, Shaman and co-author Alicia Karspeck, an NCAR scientist, used Web-based estimates of flu-related sickness from the winters of 2003–04 to 2008–09 in New York City to retrospectively generate weekly flu forecasts. They found that the technique could predict the peak timing of the outbreak more than seven weeks in advance of the actual peak.

“Analogous to weather prediction, this system can potentially be used to estimate the probability of regional outbreaks of the flu several weeks in advance,” Karspeck says. “One exciting element of this work is that we’ve applied quantitative forecasting techniques developed within the geosciences community to the challenge of real-time infectious disease prediction. This has been a tremendously fruitful cross-disciplinary collaboration.”

In the future, such flu forecasts might conceivably be disseminated on the local television news along with the weather report, says Shaman. Like the weather, flu conditions vary from region to region; Atlanta might see its peak weeks ahead of Anchorage.

“Because we are all familiar with weather broadcasts, when we hear that there is a 80 percent chance of rain, we all have an intuitive sense of whether or not we should carry an umbrella,” Shaman says. “I expect we will develop a similar comfort level and confidence in flu forecasts and develop an intuition of what we should do to protect ourselves in response to different forecast outcomes.”

A flu forecast could prompt individuals to get a vaccine, exercise care around people sneezing and coughing, and better monitor how they feel. For health officials, it could inform decisions on how many vaccines and antiviral drugs to stockpile, and in the case of a virulent outbreak, whether other measures, like closing schools, is necessary.

“Flu forecasting has the potential to significantly improve our ability to prepare for and manage the seasonal flu outbreaks that strike each year,” says Irene Eckstrand of the National Institutes of Health’s National Institute of General Medical Sciences.

The seed of the new study was planted four years ago in a conversation between the two researchers, in which Shaman expressed an interest in using models to forecast influenza. Karspeck “recommended incorporating some of the data assimilation techniques used in weather forecasting to build a skillful prediction system,” remembers Shaman.

In weather forecasting, real-time observational data are used to nudge a numerical model to conform with reality, thus reducing error. Applying this method to flu forecasting, the researchers used near-real-time data from Google Flu Trends, which estimates outbreaks based on the number of flu-related search queries in a given region.

Going forward, Shaman will test the model in other localities across the country using up-to-date data.

“There is no guarantee that just because the method works in New York, it will work in Miami,” Shaman says.