Flashes in the sky: Cosmic radio bursts point to cataclysmic origins in the distant universe

They appear to have originated from billions of light-years away and have left scientists pondering what might have caused them.

An international team of researchers including scientists from the Max Planck Institute for Radio Astronomy in Bonn could rule out any terrestrial origin for the four discovered fast radio bursts. Their brightness and distance estimates indicate that the bursts originated at cosmological distances, when the universe was just 6 to 9 billion years old. The emission process for these bursts is not known yet. 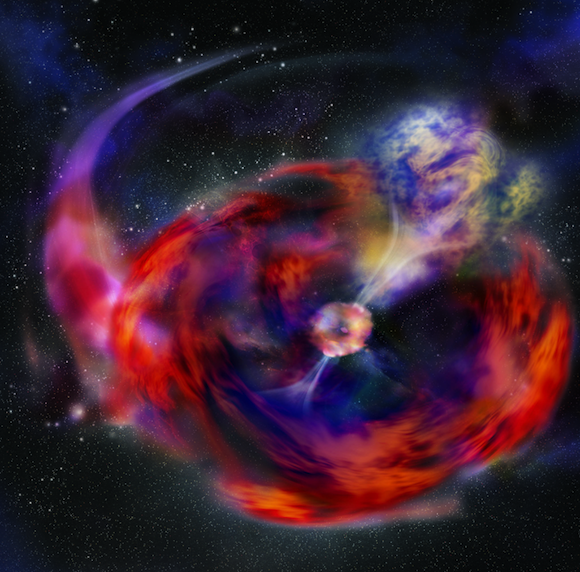 Four Fast Radio Bursts or FRBs with durations of only a few milliseconds were detected at high galactic latitudes in the southern sky.

The extremely short duration of the bursts and the inferred great distance imply that they have been caused by some cataclysmic cosmological event, such as two merging neutron stars or a star dying or being swallowed by a black hole.

The results point to some of the most extreme events in astrophysics involving large amounts of mass or energy as the source of the radio bursts. “A single burst of radio emission of unknown origin was detected outside our galaxy about six years ago but no one was certain what it was or even if it was real, so we have spent the last four years searching for more of these explosive, short-duration radio bursts,” says Dan Thornton, the University of Manchester and Commonwealth Scientific and Industrial Research Organization PhD student who led the study. “This paper describes four more bursts, removing any doubt that they are real. And the furthest one we detected after a light travelling time of about 8 billion years.” 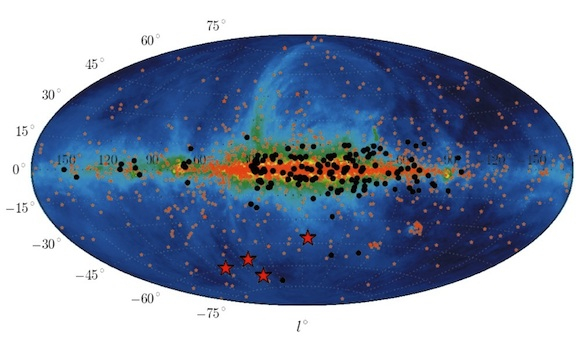 Radio map of the whole sky in Galactic coordinates, with pulsars found within the High Time Resolution Universe Survey (HTRU) project marked as black dots. The positions of the newly detected four Fast Radio Bursts (FRBs) are marked as red asterisks. b) Dynamic spectrum showing the frequency-dependent delay of one of the four sources (FRB 110220).The name denotes the detection date (February 20, 2011).

Astonishingly the findings, which were taken from a tiny fraction of the sky, also suggest that there should be one of these signals going off every 10 seconds anywhere in the sky. “The bursts last only a tenth of the blink of an eye. With current telescopes we need to be lucky to look at the right spot at the right time,” explains Michael Kramer, Director at Max Planck Institute for Radio Astronomy (MPIfR) in Bonn and Professor at Manchester University. “But if we could view the sky systematically with ‘radio eyes’ there would be flashes going off all over the sky every day.”

The team used the CSIRO Parkes 64-meter radio telescope to obtain their results.

Swinburne’s Professor Matthew Bailes thinks the most likely source of the bursts are cataclysmic explosions in the universe’s most magnetic neutron stars otherwise known as magnetars. “Magnetars can give off more energy in a millisecond than our Sun does in 300,000 years and are a leading candidate for the bursts,” he says. 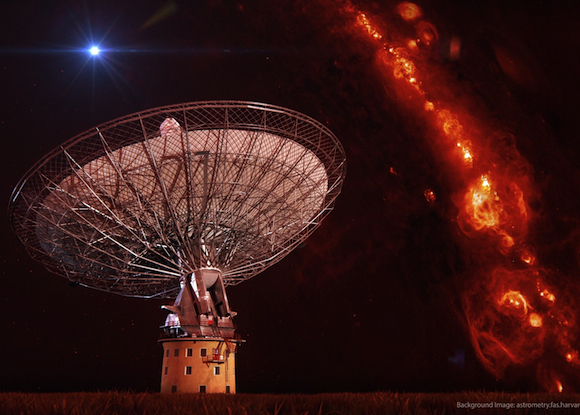 The CSIRO Parkes radio telescope, which has been used to confirm a population of Fast Radio Bursts, is shown superimposed on an image the distribution of gas in our Galaxy. An artist’s impression of a single fast radio burst is shown located well away from the Galactic plane emission. Fast radio bursts are a new population of radio source located at cosmological distances.
Credit: Swinburne Astronomy Productions, with CSIRO Parkes radio telescope.

The researchers say their results will also provide a way of finding out the properties of space where the bursts occurred.

“We are still not sure about what makes up the space between galaxies,” says Dr. Ben Stappers from Manchester’s School of Physics and Astronomy. “So we will be able to use these radio bursts like probes in order to understand more about some of the missing matter in the universe.”

“Now we are starting to use other telescopes like our large Effelsberg 100-meter radio telescope to extend this research to the whole sky,” adds Dr. David Champion from MPIfR. “We would like to look for the bursts in real time. Future telescopes like the Square Kilometre Array could cover even larger areas of the sky in order to detect many more of these bursts,” he concludes.