First evidence discovered of planet’s destruction by its star

The first evidence of a planet’s destruction by its aging star has been discovered by an international team of astronomers. 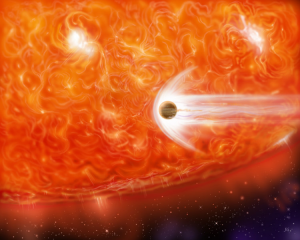 Artist’s impression of a red supergiant engulfing a Jupiter-like planet as it expands. Click to enlarge. Image Credit: NASA.

The evidence indicates that the missing planet was devoured as the star began expanding into a “red giant” — the stellar equivalent of advanced age. “A similar fate may await the inner planets in our solar system, when the Sun becomes a red giant and expands all the way out to Earth’s orbit some five-billion years from now,” said Alexander Wolszczan, Evan Pugh Professor of Astronomy and Astrophysics at Penn State University, who is one of the members of the research team. Wolszczan also is the discoverer of the first planet ever found outside our solar system.

The astronomers also discovered a massive planet in a surprisingly elliptical orbit around the same red-giant star, named BD+48 740, which is older than the Sun with a radius about eleven times bigger. Wolszczan and the team’s other members, Monika Adamow, Grzegorz Nowak, and Andrzej Niedzielski of Nicolaus Copernicus University in Torun, Poland; and Eva Villaver of the Universidad Autonoma de Madrid in Spain, detected evidence of the missing planet’s destruction while they were using the Hobby-Eberly Telescope to study the aging star and to search for planets around it. The evidence includes the star’s peculiar chemical composition, plus the highly unusual elliptical orbit of its surviving planet.

“Our detailed spectroscopic analysis reveals that this red-giant star, BD+48 740, contains an abnormally high amount of lithium, a rare element created primarily during the Big Bang 14 billion years ago,” Adamow said. Lithium is easily destroyed in stars, which is why its abnormally high abundance in this older star is so unusual. “Theorists have identified only a few, very specific circumstances, other than the Big Bang, under which lithium can be created in stars,” Wolszczan added. “In the case of BD+48 740, it is probable that the lithium production was triggered by a mass the size of a planet that spiraled into the star and heated it up while the star was digesting it.”

The second piece of evidence discovered by the astronomers is the highly elliptical orbit of the star’s newly discovered massive planet, which is at least 1.6 times as massive as Jupiter. “We discovered that this planet revolves around the star in an orbit that is only slightly wider than that of Mars at its narrowest point, but is much more extended at its farthest point,” Niedzielski said. “Such orbits are uncommon in planetary systems around evolved stars and, in fact, the BD+48 740 planet’s orbit is the most elliptical one detected so far.” Because gravitational interactions between planets are responsible for such peculiar orbits, the astronomers suspect that the dive of the missing planet toward the star before it became a giant could have given the surviving massive planet a burst of energy, throwing it into an eccentric orbit like a boomerang.

“Catching a planet in the act of being devoured by a star is an almost improbable feat to accomplish because of the comparative swiftness of the process, but the occurrence of such a collision can be deduced from the way it affects the stellar chemistry,” Villaver explained. “The highly elongated orbit of the massive planet we discovered around this lithium-polluted red-giant star is exactly the kind of evidence that would point to the star’s recent destruction of its now-missing planet.”

The paper describing this discovery is posted in an early online edition of the Astrophysical Journal Letters (Adamow et al. 2012, ApJ, 754, L15). The Hobby-Eberly Telescope is a joint project of the University of Texas at Austin, Penn State University, Ludwig-Maximilians-Universitat Munchen, and Georg-August-Universitat Gottingen. The telescope is named in honor of its principal benefactors, William P. Hobby and Robert E. Eberly.