COLLEGE STATION, March 6, 2012 — The mystery concerning the identity of two sailors whose remains were recovered from the USS Monitor, the famous Civil War ship that sank 150 years ago, may be a step closer to being solved thanks to the initiative of a Texas A&M University anthropology professor, Wayne Smith, who specializes in nautical research.

The wreckage of the USS Monitor, best known for its battle with the Confederate ironclad CSS Virginia in Hampton Roads, Va. on March 9, 1862, was first discovered in 1973. In 2002, the U.S. Navy and the National Oceanic and Atmospheric Administration (NOAA) raised the Monitor’s armored turret from 240 feet of water. 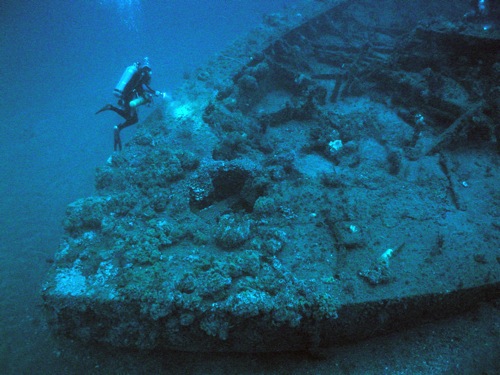 A diver swims above the bow of the USS Monitor, Image Credit: NOAA

During that recovery, divers discovered the well-preserved remains of two unidentified crewmen. Even some remnants of their uniforms were found intact.

Smith, an associate professor in the Department of Anthropology, is also chairman of the advisory council at Monitor National Marine Sanctuary based in Newport News, Va. The council provides advice to managers of the sanctuary, which was created in 1975, to protect the wreck of the famed Civil War ironclad.

Smith said when the sailors’ remains were found he recommended that the sanctuary attempt to discover the sailor’s true identities. So he put the sanctuary in touch with Louisiana State University’s Forensic Anthropology and Computer Enhancement Services (FACES) laboratory, which is noted for its facial reconstruction using computer simulation and modeling techniques.

“In all good archaeology the first questions you ask are ‘What do we make of this, what is the story, who are these people?” Smith said. “It’s putting a face in history. History is far more cogent if we know something about the people in it.”

Using skeletal remains as their guide, a team at the lab has reconstructed the facial features of the two men who lost their lives in 1862.

Eileen Barrow, the imaging expert at the LSU FACES laboratory, and Mary Manhein, the lab’s director, completed the clay facial reconstructions and have sent them to Washington, D.C., for their unveiling. The pair also created software enhanced reconstructions of the sailors that appear even more life-like. 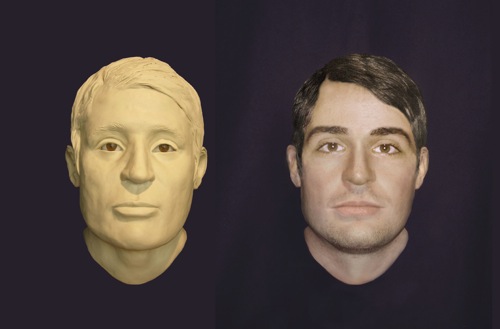 LEFT: Clay model of the face of a USS Monitor sailor whose remains were found in the gun turret in 2002. RIGHT: Computer enhanced image showing what the unknown sailor may have looked like while aboard the USS Monitor in 1862, Image Credit: Louisiana State University

“We’ve done multiple historic projects before, but we haven’t done one where someone has been raised from a ship that’s been down for 150 years,” said Manhein. “To be able to work on something like that and to know that they were U.S. military people is a big honor. We’re very excited about having the privilege to do these images.”

Smith hopes that when paired with DNA analysis, the facial reconstruction will link the unidentified sailors to their descendants and put a name with a face from history.

Many historical documents from the time period are incomplete, so archaeology could reveal some important clues about the past.

“A lot of people who were being pressed into service for this particular vessel didn’t have papers,” Smith said. “A family might have common knowledge in its genealogy that they had a captain on the Monitor and then find out he wasn’t the captain — he was the cook.”

Besides being optimistic about finding the crewmen’s true identities, the scientists in this project plan to give the sailors the honorable burial they deserve for serving their country. To a scientist like Smith, it’s the completion of a story.

“Until there’s an end, there’s no end. It’s not philosophical. It’s up to us to create the conclusion of this story,” he said.

By giving these long-lost sailors an identity, Smith is confident that this scientific team can help write a gratifying end to the story of these brave men.
#####
Media contact: Monika Blackwell, (979) 845-6061 or m.blackwell@tamu.edu

For more news about Texas A&M University, go to https://tamutimes.tamu.edu.