Exocomets may be as common as exoplanets

The discovery of six likely comets around distant stars suggests that comets — dubbed “exocomets” — are just as common in other stellar systems with planets.

Comets trailing wispy tails across the night sky are a beautiful byproduct of our solar system’s formation, icy leftovers from 4.6 billion years ago when the planets coalesced from rocky rubble.

The discovery by astronomers at the University of California, Berkeley, and Clarion University in Pennsylvania of six likely comets around distant stars suggests that comets — dubbed “exocomets” — are just as common in other stellar systems with planets.

Though only one of the 10 stars now thought to harbor comets is known to harbor planets, the fact that all these stars have massive surrounding disks of gas and dust a signature of exoplanets — makes it highly likely they all do, said Barry Welsh, a research astronomer at UC Berkeley’s Space Sciences Laboratory. 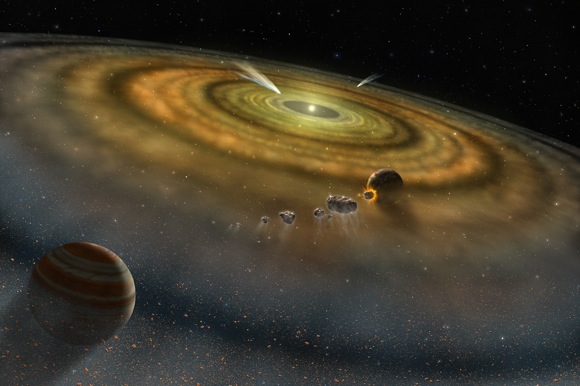 Comets can be seen in this artistic depiction of the young star Beta Pictoris as seen from the outer edge of its disk. Credit:NASA / Lynette Cook

“This is sort of the missing link in current planetary formation studies,” Welsh said. “We see dust disks — presumably the primordial planet-forming material — around a whole load of stars, and we see planets, but we don’t see much of the stuff in between: the asteroid-like planetesimals and the comets. Now, I think we have nailed it. These exocomets are more common and easier to detect than people previously thought.”

Welsh will present the findings on Monday, Jan. 7, during a meeting of the American Astronomical Society in Long Beach, Calif. Three of the new exocomets were reported in the Oct. 2012 issue of the journal Publications of the Astronomical Society of the Pacific by Welsh and colleague Sharon L. Montgomery of the Department of Physics at Clarion University.

Welsh also will participate in a media briefing on Tuesday, Jan. 8, at 2:30 p.m. PST in Room 204 on Level 2 of the Long Beach Convention Center.

Welsh summarized the current theory of planet formation as “interstellar dust under the influence of gravity becomes blobs, and the blobs grow into rocks, the rocks coalesce and become bigger things — planetesimals and comets — and finally, you get planets.”

Many stars are known to be surrounded by disks of gas and dust, and one of the closest, Beta Pictoris, was reported to have comets in 1987. In 2009, astronomers found a large planet around Beta Pic about 10 times larger than Jupiter. Three other stars — one discovered by Welsh in 1998 — were subsequently found to have comets.

“But then, people just lost interest. They decided that exocomets were a done deal, and everybody switched to the more exciting thing, exoplanets,” Welsh said. “But I came back to it last year and thought, ‘Four exocomets is not all that many compared to the couple of thousand exoplanets known — perhaps I can improve on that.'”

Detecting comets may sound difficult — after all, the snowballs are typically only 5-20 kilometers (3-13 miles) in diameter. But Welsh said that once comets are knocked out of their parking orbit in the outer reaches of a stellar system and fall toward a star, they heat up and evaporate. The evaporating comet, which is what we see with comets such as Halley and next year’s highly anticipated Comet ISON, creates a brief, telltale absorption line in the spectrum of a star.

The six new exocomet systems were discovered during three five-night-long observing runs between May 2010 and November 2012 using the 2.1-meter telescope of the McDonald Observatory in Texas. The telescope’s high resolution spectrograph revealed weak absorption features that were found to vary from night to night, an outcome that Welsh and Montgomery attributed to large clouds of gas emanating from the nuclei of comets as they neared their central stars.

All of the newly discovered exocomets — 49 Ceti (HD 9672), 5 Vulpeculae (HD 182919), 2 Andromedae, HD 21620, HD 42111 and HD 110411 — are around very young type A stars, which are about 5 million years old, because Welsh’s detection technique works best with them. With a higher resolution spectrograph, he might be able to detect comets around the older and yellower G and F stars around which most exoplanets have been found.

Nevertheless, all evidence suggests that these dusty A stars should have planets, and planets are the only thing that could knock a comet out of its orbit and make it fall toward its star.

“If it quacks, waddles and has feathers, then it’s probably a duck,” he said.