More evidence that comets could have seeded life on Earth

A new experiment simulating conditions in deep space reveals that the complex building blocks of life could have been created on icy interplanetary dust and then carried to Earth, jump-starting life.

It’s among the most ancient of questions: What are the origins of life on Earth?

Chemists from the University of California, Berkeley, and the University of Hawaii, Manoa, showed that conditions in space are capable of creating complex dipeptides – linked pairs of amino acids – that are essential building blocks shared by all living things. The discovery opens the door to the possibility that these molecules were brought to Earth aboard a comet or possibly meteorites, catalyzing the formation of proteins (polypeptides), enzymes and even more complex molecules, such as sugars, that are necessary for life. 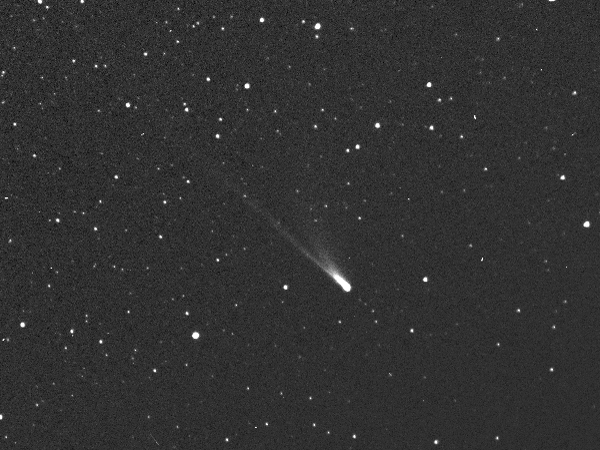 Comet 96P Machholz was discoverd on May 12, 1986, by Donald Machholz. Photo: Wikimedia Commons

“It is fascinating to consider that the most basic biochemical building blocks that led to life on Earth may well have had an extraterrestrial origin,” said UC Berkeley chemist Richard Mathies, coauthor of a paper published online last week and scheduled for the March 10 print issue of The Astrophysical Journal.

While scientists have discovered basic organic molecules, such as amino acids, in numerous meteorites that have fallen to Earth, they have been unable to find the more complex molecular structures that are prerequisites for our planet’s biology. As a result, scientists have always assumed that the really complicated chemistry of life must have originated in Earth’s early oceans.

In an ultra-high vacuum chamber chilled to 10 degrees above absolute zero (10 Kelvin), Seol Kim and Ralf Kaiser of the Hawaiian team simulated an icy snowball in space including carbon dioxide, ammonia and various hydrocarbons such as methane, ethane and propane. When zapped with high-energy electrons to simulate the cosmic rays in space, the chemicals reacted to form complex, organic compounds, specifically dipeptides, essential to life.

At UC Berkeley, Mathies and Amanda Stockton then analyzed the organic residues through the Mars Organic Analyzer, an instrument that Mathies designed for ultrasensitive detection and identification of small organic molecules in the solar system. The analysis revealed the presence of complex molecules – nine different amino acids and at least two dipeptides – capable of catalyzing biological evolution on earth.