Even if emissions stop, carbon dioxide could warm Earth for centuries

Even if carbon dioxide emissions came to a sudden halt, the carbon dioxide already in Earth’s atmosphere could continue to warm our planet for hundreds of years, says a new study. 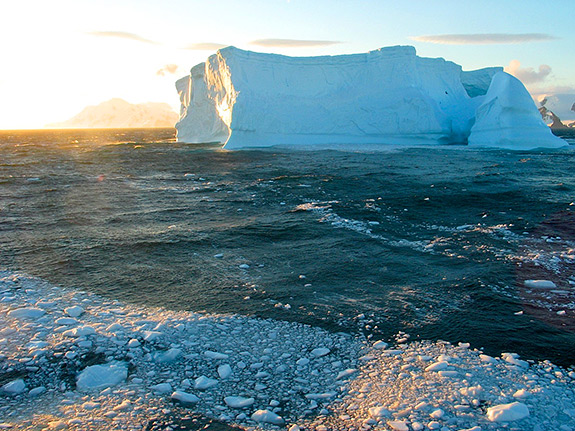 Princeton University-led research suggests that even if carbon dioxide emissions came to a sudden halt, the carbon dioxide already in Earth’s atmosphere could continue to warm our planet for hundreds of years. The researchers found while carbon dioxide steadily dissipates, the absorption of heat the oceans decreases, especially in the polar oceans such as off of Antarctica (above). This effect has not been accounted for in existing research. Photo courtesy of Eric Galbraith, McGill University

The Princeton University-led research, published in the journal Nature Climate Change, suggests that it might take a lot less carbon than previously thought to reach the global temperature scientists deem unsafe.

The researchers simulated an Earth on which, after 1,800 billion tons of carbon entered the atmosphere, all carbon dioxide emissions suddenly stopped. Scientists commonly use the scenario of emissions screeching to a stop to gauge the heat-trapping staying power of carbon dioxide. Within a millennium of this simulated shutoff, the carbon itself faded steadily with 40 percent absorbed by Earth’s oceans and landmasses within 20 years and 80 percent soaked up at the end of the 1,000 years.

After a century of cooling, the planet warmed by 0.37 degrees Celsius (0.66 Fahrenheit) during the next 400 years as the ocean absorbed less and less heat. While the resulting temperature spike seems slight, a little heat goes a long way here. Earth has warmed by only 0.85 degrees Celsius (1.5 degrees Fahrenheit) since pre-industrial times.

The Intergovernmental Panel on Climate Change estimates that global temperatures a mere 2 degrees Celsius (3.6 degrees Fahrenheit) higher than pre-industrial levels would dangerously interfere with the climate system. To avoid that point would mean humans have to keep cumulative carbon dioxide emissions below 1,000 billion tons of carbon, about half of which has already been put into the atmosphere since the dawn of industry.

The lingering warming effect the researchers found, however, suggests that the 2-degree point may be reached with much less carbon, said first author Thomas Frölicher, who conducted the work as a postdoctoral researcher in Princeton’s Program in Atmospheric and Oceanic Sciences under co-author Jorge Sarmiento, the George J. Magee Professor of Geoscience and Geological Engineering.

“If our results are correct, the total carbon emissions required to stay below 2 degrees of warming would have to be three-quarters of previous estimates, only 750 billion tons instead of 1,000 billion tons of carbon,” said Frölicher, now a researcher at the Swiss Federal Institute of Technology in Zurich. “Thus, limiting the warming to 2 degrees would require keeping future cumulative carbon emissions below 250 billion tons, only half of the already emitted amount of 500 billion tons.”

The researchers’ work contradicts a scientific consensus that the global temperature would remain constant or decline if emissions were suddenly cut to zero. But previous research did not account for a gradual reduction in the oceans’ ability to absorb heat from the atmosphere, particularly the polar oceans, Frölicher said. Although carbon dioxide steadily dissipates, Frölicher and his co-authors were able to see that the oceans that remove heat from the atmosphere gradually take up less. Eventually, the residual heat offsets the cooling that occurred due to dwindling amounts of carbon dioxide.

Frölicher and his co-authors showed that the change in ocean heat uptake in the polar regions has a larger effect on global mean temperature than a change in low-latitude oceans, a mechanism known as “ocean-heat uptake efficacy.” This mechanism was first explored in a 2010 paper by Frölicher’s co-author, Michael Winton, a researcher at the National Oceanic and Atmospheric Administration’s Geophysical Fluid Dynamics Laboratory (GFDL) on Princeton’s Forrestal Campus.

“The regional uptake of heat plays a central role. Previous models have not really represented that very well,” Frölicher said.

“Scientists have thought that the temperature stays constant or declines once emissions stop, but now we show that the possibility of a temperature increase can not be excluded,” Frölicher said. “This is illustrative of how difficult it may be to reverse climate change — we stop the emissions, but still get an increase in the global mean temperature.”