If we landed on Jupiter’s moon Europa, what would we want to know?

So far, scientists have seen a fractured, ice-covered world with tantalizing signs of a liquid water ocean – a possible home for microbial life – under its surface. 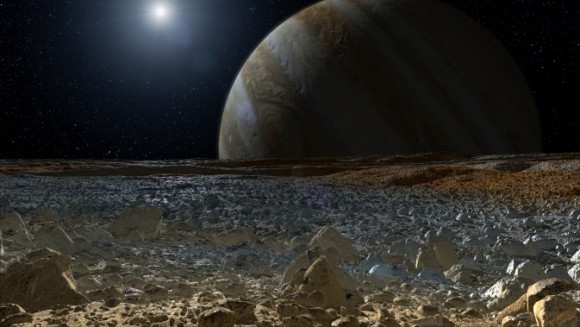 Artist’s concept of the view from the surface of Jupiter’s moon Europa, with Jupiter in the background. Europa has an icy surface, tinged with reddish areas that might be a hospitable home for microbial life. Image via NASA/JPL-Caltech

Most of what scientists know of Jupiter’s moon Europa they have gleaned from a dozen or so close flybys from NASA’s Voyager 2 spacecraft in 1979 and NASA’s Galileo spacecraft in the mid-to-late 1990s. Even in these fleeting, paparazzi-like encounters, scientists have seen a fractured, ice-covered world with tantalizing signs of a liquid water ocean – a possible home for microbial life – under its surface. 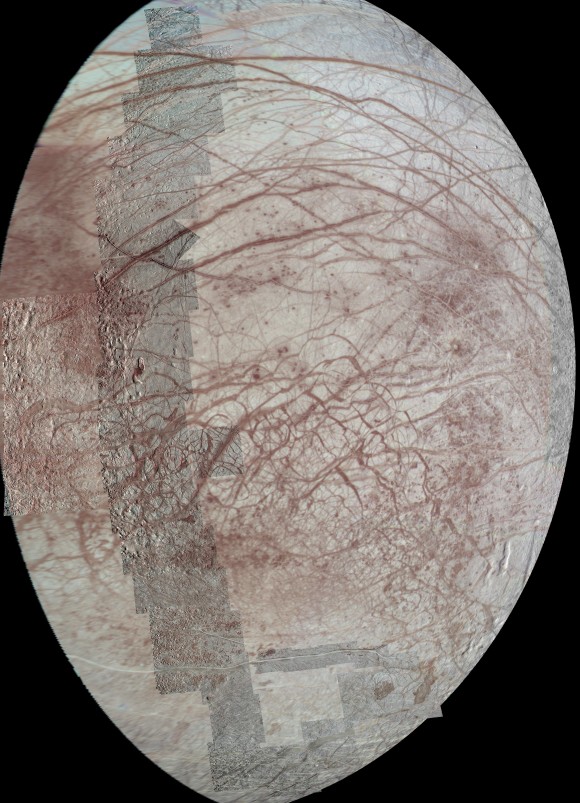 A pole-to-pole view of Europa comprised of several different mosaics overlaid on a global view, for context. NASA’s Galileo mission acquired the images that made this view possible. Image via NASA/JPL-Caltech/University of Arizona

What if we got to land on Europa’s surface and conduct something along the lines of a more in-depth interview? What would scientists ask? A new study in the journal Astrobiology authored by a NASA-appointed science definition team lays out their consensus on the most important questions to address.

“If one day humans send a robotic lander to the surface of Europa, we need to know what to look for and what tools it should carry,” said Robert Pappalardo, the study’s lead author, based at NASA’s Jet Propulsion Laboratory, Pasadena, Calif. “There is still a lot of preparation that is needed before we could land on Europa, but studies like these will help us focus on the technologies required to get us there, and on the data needed to help us scout out possible landing locations. Europa is the most likely place in our solar system beyond Earth to have life today, and a landed mission would be the best way to search for signs of life.”

The paper was authored by scientists from a number of other NASA centers and universities, including the Johns Hopkins University Applied Physics Laboratory, Laurel, Md.; University of Colorado, Boulder; University of Texas, Austin; and the NASA Goddard Space Flight Center, Greenbelt, Md. The team found the most important questions clustered around composition: what makes up the reddish “freckles” and reddish cracks that stain the icy surface? What kind of chemistry is occurring there? Are there organic molecules, which are among the building blocks of life?

Additional priorities involved improving our images of Europa – getting a look around at features on a human scale to provide context for the compositional measurements. Also among the top priorities were questions related to geological activity and the presence of liquid water: how active is the surface? How much rumbling is there from the periodic gravitational squeezes from its planetary host, the giant planet Jupiter? What do these detections tell us about the characteristics of liquid water below the icy surface? 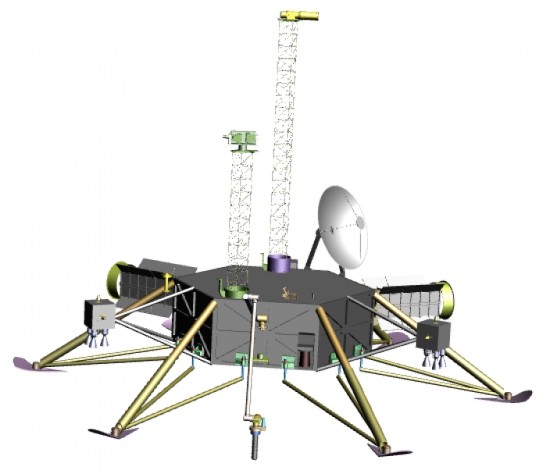 Design for a possible robotic lander for a future mission to Jupiter’s moon Europa. Scientists would want the lander to be equipped with tools to answer key questions about the moon’s composition, geological activity and possibility of hosting liquid water. Image via NASA/JPL-Caltech

“Landing on the surface of Europa would be a key step in the astrobiological investigation of that world,” said Chris McKay, a senior editor of the journal Astrobiology, who is based at NASA Ames Research Center, Moffett Field, Calif. “This paper outlines the science that could be done on such a lander. The hope would be that surface materials, possibly near the linear crack features, include biomarkers carried up from the ocean.”