Engineers created a wearable heart monitor thinner than a dollar bill that could one day provide doctors with a safer way to check the condition of a patient’s heart.

Most of us don’t ponder our pulses outside of the gym. But doctors use the human pulse as a diagnostic tool to monitor heart health.

Zhenan Bao, a professor of chemical engineering at Stanford, has developed a heart monitor thinner than a dollar bill and no wider than a postage stamp. The flexible skin-like monitor, worn under an adhesive bandage on the wrist, is sensitive enough to help doctors detect stiff arteries and cardiovascular problems.

The devices could one day be used to continuously track heart health and provide doctors a safer method of measuring a key vital sign for newborn and other high-risk surgery patients. 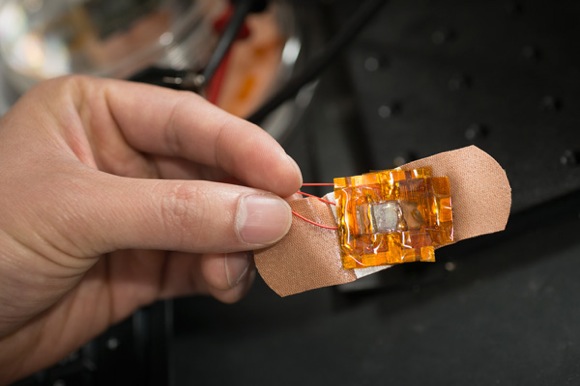 This flexible skin-like heart monitor is small enough to wear under a bandage. Credit: L.A. Cicero

To find your pulse, press your index and middle finger into the underside of your opposite wrist. You should feel the steady rhythm of your heart as it pumps blood through your veins.

Each beat you feel is actually made up of two distinct peaks, even though you can’t tell them apart with just your fingers. The first, larger peak is from your heart pumping out blood. Shortly after a heartbeat, your lower body sends a reflecting wave back to your artery system, creating a smaller second peak.

The relative sizes of these two peaks can be used by medical experts to measure your heart’s health.

“You can use the ratio of the two peaks to determine the stiffness of the artery, for example,” said Gregor Schwartz, a post-doctoral fellow and a physicist for the project. “If there is a change in the heart’s condition, the wave pattern will change. Fortunately, when I tested this on myself, my heart looked fine.”

To make the heart monitor both sensitive and small, Bao’s team uses a thin middle layer of rubber covered with tiny pyramid bumps. Each mold-made pyramid is only a few microns across – smaller than a human red blood cell.

When pressure is put on the device, the pyramids deform slightly, changing the size of the gap between the two halves of the device. This change in separation causes a measurable change in the electromagnetic field and the current flow in the device.

The more pressure placed on the monitor, the more the pyramids deform and the larger the change in the electromagnetic field. Using many of these sensors on a prosthetic limb could act like an electronic skin, creating an artificial sense of touch.

When the sensor is placed on someone’s wrist using an adhesive bandage, the sensor can measure that person’s pulse wave as it reverberates through the body.

The device is so sensitive that it can detect more than just the two peaks of a pulse wave. When engineers looked at the wave drawn by their device, they noticed small bumps in the tail of the pulse wave invisible to conventional sensors. Bao said she believes these fluctuations could potentially be used for more detailed diagnostics in the future.

Doctors already use similar, albeit much bulkier, sensors to keep track of a patient’s heart health during surgery or when taking a new medication. But in the future Bao’s device could help keep track of another vital sign.

“In theory, this kind of sensor can be used to measure blood pressure,” said Schwartz. “Once you have it calibrated, you can use the signal of your pulse to calculate your blood pressure.”

This non-invasive method of monitoring heart health could replace devices inserted directly into an artery, called intravascular catheters. These catheters create a high risk of infection, making them impractical for newborns and high-risk patients. Thus, an external monitor like Bao’s could provide doctors a safer way to gather information about the heart, especially during infant surgeries.

Bao’s team is working with other Stanford researchers to make the device completely wireless. Using wireless communication, doctors could receive a patient’s minute-by-minute heart status via cell phone, all thanks to a device as thick as a human hair.

“For some patients with a potential heart disease, wearing a bandage would allow them to constantly measure their heart’s condition,” Bao said. “This could be done without interfering with their daily life at all, since it really just requires wearing a small bandage.”

The team published its work in the May 12 edition of Nature Communications. The team’s research is supported by funding from the National Science Foundation and the Air Force Office of Scientific Research.