Down to the twilight zone of the Atlantic Ocean

A team of 23 scientists will be sampling and measuring the water column from the surface to the ocean floor some 4,800 metres down – nearly 3 miles.

Just under the sunlit waters of the sea surface, in this twilight zone a tremendous amount of activity is taking place. At between 100 and 1000 metres deep, this is where planktonic plants and animals both generate and destroy particles making their way down into the abyss.

A team of 23 scientists led by Prof Richard Lampitt will be sampling and measuring the water column from the surface to the ocean floor some 4,800 metres down – nearly 3 miles. But it is the twilight – or Mesopelagic zone – that engages the scientists’ attention. They will be contributing to a daily blog: https://downtothetwilightzone.blogspot.co.uk 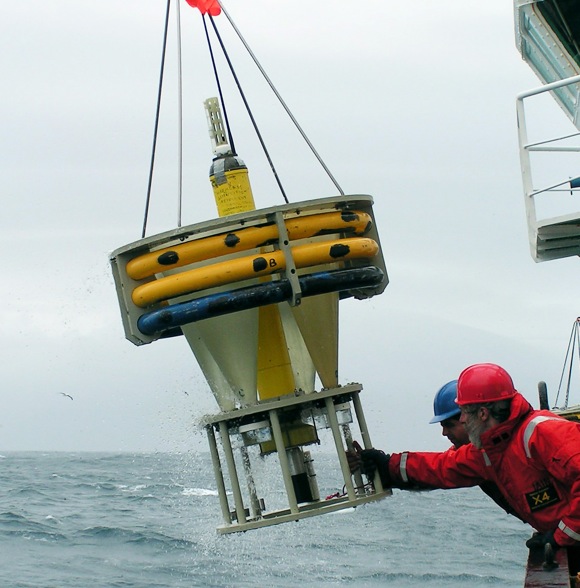 Richard explains: “Our mission is of considerable interest to the scientific community and of particular relevance to current concerns about climate change. The basic question is to understand what controls the downward transport of carbon from the surface sunlit layer, and from the atmosphere, into the deep ocean. We will try to examine the link between the structure and function of upper ocean biology and this sinking flux of carbon.

“We have been planning this cruise for three years, and although I have been coming to sea for a good while, I always find this period just before we start work to be a particular thrill. In this case it is even more so, as much of the work is really novel.”

As carbon rich material from dead plant and zooplankton bodies and faeces sinks out of the Euphotic (or sunlit) zone, most of it is broken down in the twilight zone and then mixes back up into the surface in the winter. Any sediment that drifts further down finds it way to the seafloor. This carbon is lost for periods of centuries, sequestered from the carbon cycle.

The Porcupine Abyssal Plain sustained observatory is a heavily instrumented area of the open ocean 350 miles southwest of Ireland and in a water depth of 4800m. The instruments measure a wide variety of properties of the environment above the water, within it and on the seabed and much of the data is transmitted in real time to land via satellite.