Designers of social robots, take note. Bring your dog to the lab next time you test a prototype, and watch how your pet interacts with it. You might just learn a thing or two that could help you fine-tune future designs. So says Gabriella Lakatos of the Hungarian Academy of Science and Eötvös Loránd University, lead author of a study¹ published in Springer’s journal Animal Cognition that found that man’s best friend reacts sociably to robots that behave socially towards them, even if the devices look nothing like a human. 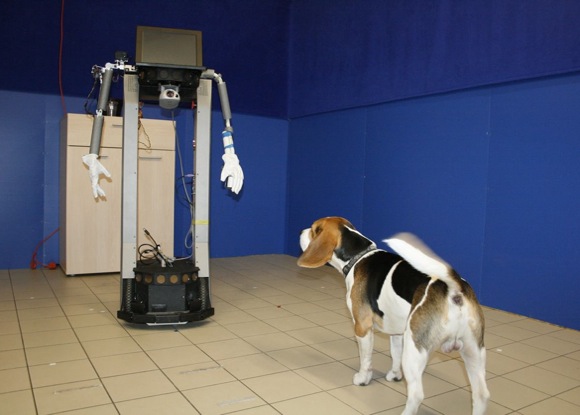 Then, in the ‘social group,’ one set of dogs watched an interaction between the owner and the human experimenter followed by observing a ‘social’ interaction between the owner and the robot. The remaining dogs in this group also participated in these interactions in the reverse order. These interactions were followed by sessions in which either the human experimenter or the robot pointed out the location of hidden food in both the ‘asocial’ and the ‘social’ groups.

A customized human-sized PeopleBot² with two arms and four-fingered hands were used. One of its robotic arms makes simple gestures and grasps objects. The PeopleBot does not resemble a human, but looks rather like a piece of gym equipment with a white gloved hand attached to it.

It was programmed to either perform socially enriched human-like conduct (such as calling a dog by its name) or to behave rather machine-like and in an asocial manner. The human experimenter used in tandem with the robot could only do moves similar to the device’s capabilities, and was therefore only allowed to use one hand to make specific gestures.

The level of sociality shown by the robot was not enough to elicit the same set of social behavioral reactions from the dogs that they normally display in their close relationship with humans. However, the researchers recorded definite positive social interactions between the animals and the robot. For instance, the dogs spent more time near the robot or gazing at its head when the PeopleBot behaved socially.

Furthermore, it was quite difficult for the dogs to find the hidden food when a robot pointed it out to them. However, further analysis of this result showed that the dogs were far better at finding the loot when a socially behaving robot pointed it out to them. The researchers believe that the dogs’ previous experience with the robot, while watching their owners interact with the PeopleBot, may have also influenced their attitude towards it when they confronted it during the pointing phase.

Lakatos and her colleagues argue that this type of study not only provides important insights into the mental processes of living creatures, but also about how social robots should be designed. “Roboticists who design interactive robots should look into the sociality and behavior of their designs, even if they do not embody human-like characteristics,” Lakatos advises.

2.The PeopleBot mobile platform was designed at the Institute of Computer Engineering, Control and Robotics at Wroclaw University of Technology in Poland.