Do black holes have hair?

Black holes may be less simple and “clean” than how the most authoritative theoretical model describes them.

A black hole. A simple and clear concept, at least according to the hypothesis by Roy Kerr, who in 1963 proposed a “clean” black hole model, which is the current theoretical paradigm. From theory to reality things may be quite different. According to a new research carried out by a group of scientists that includes Thomas Sotiriou, a physicist of the International School for Advanced Studies (SISSA) of Trieste, black holes may be much “dirtier” than what Kerr believed. 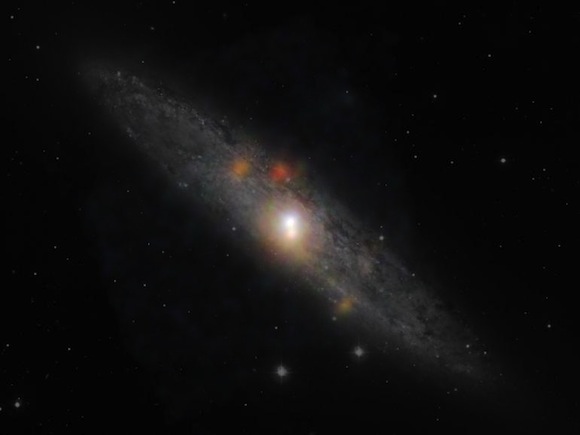 The black hole at the center of the Sculptor Galaxy. Image credit: NASA/JPL-Caltech/JHU

According to Sotiriou, things may not have occurred this way. “Black holes, according to our calculations, may have hair”, explains Sotiriou, referring to a well-known statement by physicist John Wheeler, who claimed that “black holes have no hair”. Wheeler meant that mass and angular momentum are all one needs to describe them.

“Although Kerr’s ‘bald’ model is consistent with General Relativity, it might not be consistent with some well-known extensions of Einstein’s theory, called tensor-scalar theories”, adds Sotiriou. “This is why we have carried out a series of new calculations that enabled us to focus on the matter that normally surrounds realistic black holes, those observed by astrophysicists. This matter forces the pure and simple black hole hypothesized by Kerr to develop a new ‘charge’ (the hair, as we call it) which anchors it to the surrounding matter, and probably to the entire Universe.”

The experimental confirmation of this new hypothesis may come from the observations carried out with the interferometers, instruments capable of recording the gravitational waves. “According to our calculations, the growth of the black hole’s hair,” concludes Sotiriou “is accompanied by the emission of distinctive gravitational waves. In the future, the recordings by the instrument may challenge Kerr’s model and broaden our knowledge of the origins of gravity.”