Did life on Earth begin at hot-water vents on the sea floor?

Three new papers strengthen the case that Earth’s first life began at alkaline hydrothermal vents at the bottoms of oceans. Scientists are interested in understanding early life on Earth to aid in the search for life elsewhere.

How did life on Earth get started? Three new papers co-authored by Mike Russell, a research scientist at NASA’s Jet Propulsion Laboratory, Pasadena, Calif., strengthen the case that Earth’s first life began at alkaline hydrothermal vents at the bottom of oceans. Scientists are interested in understanding early life on Earth because if we ever hope to find life on other worlds — especially icy worlds with subsurface oceans such as Jupiter’s moon Europa and Saturn’s Enceladus — we need to know what chemical signatures to look for. 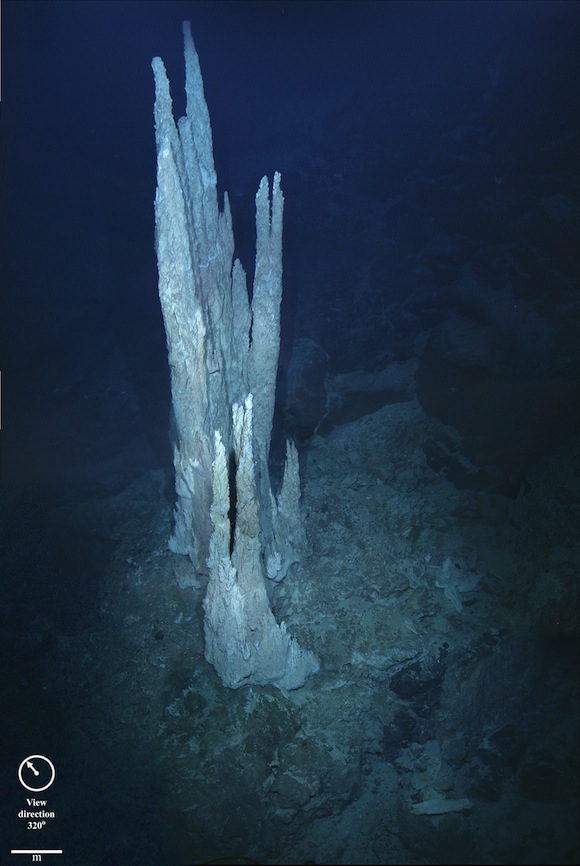 This image from the floor of the Atlantic Ocean shows a collection of limestone towers known as the “Lost City.” Alkaline hydrothermal vents of this type are suggested to be the birthplace of the first living organisms on the ancient Earth. Scientists are interested in understanding early life on Earth because if we ever hope to find life on other worlds – especially icy worlds with subsurface oceans such as Jupiter’s moon Europa and Saturn’s Enceladus – we need to know what chemical signatures to look for. Image courtesy D. Kelley and M. Elend/University of Washington

Two papers published recently in the journal Philosophical Transactions of the Royal Society B provide more detail on the chemical and precursor metabolic reactions that have to take place to pave the pathway for life. Russell and his co-authors describe how the interactions between the earliest oceans and alkaline hydrothermal fluids likely produced acetate (comparable to vinegar). The acetate is a product of methane and hydrogen from the alkaline hydrothermal vents and carbon dioxide dissolved in the surrounding ocean. Once this early chemical pathway was forged, acetate could become the basis of other biological molecules. They also describe how two kinds of “nano-engines” that create organic carbon and polymers — energy currency of the first cells — could have been assembled from inorganic minerals.

A paper published in the journal Biochimica et Biophysica Acta analyzes the structural similarity between the most ancient enzymes of life and minerals precipitated at these alkaline vents, an indication that the first life didn’t have to invent its first catalysts and engines.

“Our work on alkaline hot springs on the ocean floor makes what we believe is the most plausible case for the origin of the life’s building blocks and its energy supply,” Russell said. “Our hypothesis is testable, has the right assortment of ingredients and obeys the laws of thermodynamics.”

Russell’s work was funded by the NASA Astrobiology Institute through the Icy Worlds team based at JPL, a division of the California Institute of Technology, Pasadena. The NASA Astrobiology Institute, based at NASA’s Ames Research Center, Moffett Field, Calif., is a partnership among NASA, 15 U.S. teams and 13 international consortia. The Institute is part of NASA’s astrobiology program, which supports research into the origin, evolution, distribution and future of life on Earth and the potential for life elsewhere.