Destruction of coastal habitats may release as much as 1 billion tons of carbon into the atmosphere each year, 10 times higher than previously reported, according to a new Duke led study. 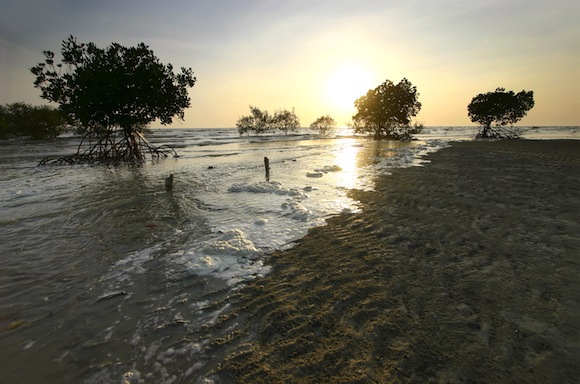 Published online this week in PLOS ONE, the analysis provides the most comprehensive estimate of global carbon emissions from the loss of these coastal habitats to date: 0.15 to 1.2 billion tons. It suggests there is a high value associated with keeping these coastal-marine ecosystems intact as the release of their stored carbon costs roughly $6-$42 billion annually.

“On the high end of our estimates, emissions are almost as much as the carbon dioxide emissions produced by the world’s fifth-largest emitter, Japan,” said Brian Murray, director for economic analysis at Duke’s Nicholas Institute for Environmental Policy Solutions. “This means we have previously ignored a source of greenhouse gas emissions that could rival the emissions of many developed nations.”

This carbon, captured through biological processes and stored in the sediment below mangroves, sea grasses and salt marshes, is called “blue carbon.” When these wetlands are drained and destroyed, the sediment layers below begin to oxidize. Once this soil, which can be many feet deep, is exposed to air or ocean water it releases carbon dioxide over days or years.

“There’s so little data out there on how much carbon might be released when these ecosystems are disturbed,” said Oregon State University’s Daniel Donato, co-lead author of the paper. “With this analysis we tried to reduce some of that uncertainty by identifying some ‘bookends’ that represent the lowest and highest probable emissions, given the information available.”

The PLOS ONE study looked at the potentially massive amount of carbon tucked away from the atmosphere by the slow accretion, over hundreds to thousands of years, of soils beneath these habitats. Previous work in the area has focused only on the amount of carbon stored in these systems and not what happens when these systems are degraded or destroyed and the stored carbon is released.

“These coastal ecosystems are a tiny ribbon of land, only 6 percent of the land area covered by tropical forest, but the emissions from their destruction are nearly one-fifth of those attributed to deforestation worldwide,” said Linwood Pendleton, the study’s co-lead author and director of the Ocean and Coastal Policy Program at the Nicholas Institute. “One hectare, or roughly two acres of coastal marsh, can contain the same amount of carbon as 488 cars produce in a year. Comparatively, destroying a hectare of mangroves could produce as much greenhouse gas emissions as cutting down three to five hectares of tropical forest.”

The critical role of these ecosystems for carbon sequestration has been overlooked, the study said. These coastal habitats could be protected and climate change combated if a system—much like what is being done to protect trees through Reducing Emissions from Deforestation and Forest Degradation (REDD)—were implemented. Such a policy would assign credits to carbon stored in these habitats and provide economic incentive if they are left intact.

“Blue carbon ecosystems provide a plethora of benefits to humans: they support fisheries, buffer coasts from floods and storms, and filter coastal waters from pollutants,” said Emily Pidgeon, senior director of Strategic Marine Initiatives at Conservation International and co-chair of the Blue Carbon Initiative. “Economic incentives to reverse these losses may help preserve these benefits and serve as a viable part of global efforts to reduce greenhouse gases and address climate change.”