Astronomers have for the first time identified discrete sources that account for nearly all the radio waves coming from distant galaxies.

“The sensitivity and resolution of the VLA, following its decade-long upgrade, made it possible to identify the specific objects responsible for nearly all of the radio background emission coming from beyond our own Milky Way Galaxy,” said Jim Condon, of the National Radio Astronomy Observatory (NRAO). “Before we had this capability, we could not detect the numerous faint sources that produce much of the background emission,” he added. 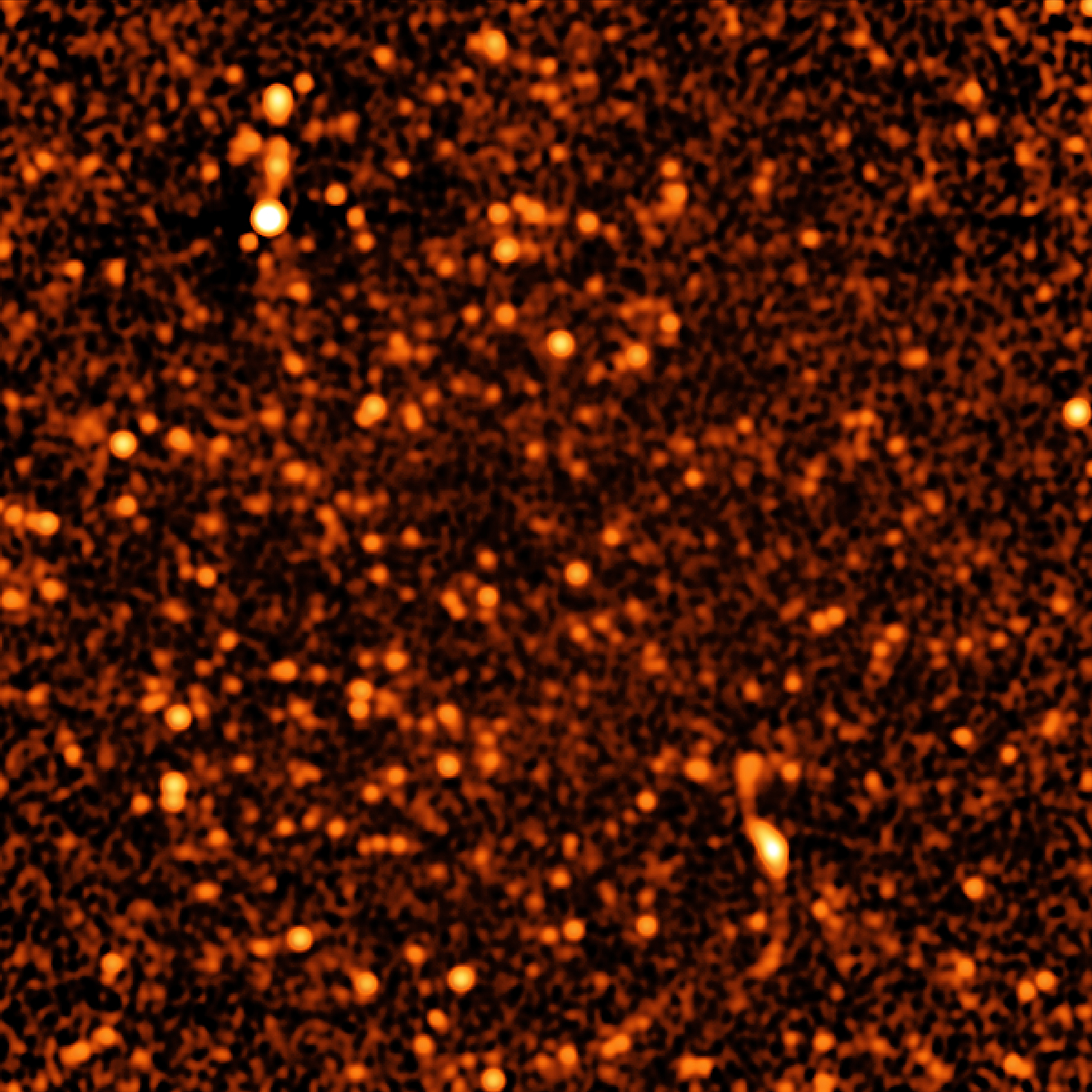 View Larger | VLA Image of Small Portion of Extragalactic Space. About 2,000 discrete objects are identified in this VLA image of the distant Universe. This entire image constitutes only about one-millionth of the entire sky.
Credit: Condon, et al., NRAO/AUI/NSF

Previous studies had measured the amount of radio emission coming from the distant Universe, but had not been capable of attributing all the radio waves to specific objects. In earlier observations, emission from two or more faint objects often was blurred or blended into what appeared to be a single, stronger source of radio waves.

“Advancing technology has revealed more and more of the Universe to us over the past few decades, and our study shows individual objects that account for about 96 percent of the background radio emission coming from the distant Universe,” Condon said. “The VLA now is a million times more sensitive than the radio telescopes that made landmark surveys of the sky in the 1960s,” he added.

In February and March of 2012, Condon and his colleagues studied a region of sky that previously had been observed by the original, pre-upgrade, VLA, and by the Spitzer space telescope, which observes infrared light. They carefully analyzed and processed their data, then produced an image that showed the individual, radio-emitting objects within their field of view.

Their field of view, in the constellation Draco, encompassed about one-millionth of the whole sky. In that region, they identified about 2,000 discrete radio-emitting objects. That would indicate, the scientists said, that there are about 2 billion such objects in the whole sky. These are the objects that account for 96 percent of the background radio emission. However, the researchers pointed out, the remaining 4 percent of the radio emission could be coming from as many as 100 billion very faint objects.

Further analysis allowed the scientists to determine which of the objects are galaxies containing massive central black holes that are actively consuming surrounding material and which are galaxies undergoing rapid bursts of star formation. Their results indicate that, as previously proposed, the two types of galaxies evolved at the same rate in the early Universe.

“What radio astronomers have accomplished over the past few decades is analogous to advancing from the early Greek maps of the world that showed only the Mediterranean basin to the maps of today that show the whole world in exquisite detail,” Condon said.