Dark energy alternatives to Einstein are running out of room

Research finds that a popular alternative to Albert Einstein’s theory for the acceleration of the expansion of the universe does not fit newly obtained data.

Research by University of Arizona astronomy professor Rodger Thompson finds that a popular alternative to Albert Einstein’s theory for the acceleration of the expansion of the universe does not fit newly obtained data on a fundamental constant, the proton to electron mass ratio.

Thompson’s findings, reported Jan. 9 at the American Astronomical Society meeting in Long Beach, Calif., impact our understanding of the universe and point to a new direction for the further study of its accelerating expansion.

To explain the acceleration of the expansion of the universe, astrophysicists have invoked dark energy – a hypothetical form of energy that permeates all of space. A popular theory of dark energy, however, does not fit new results on the value of the proton mass divided by the electron mass in the early universe. 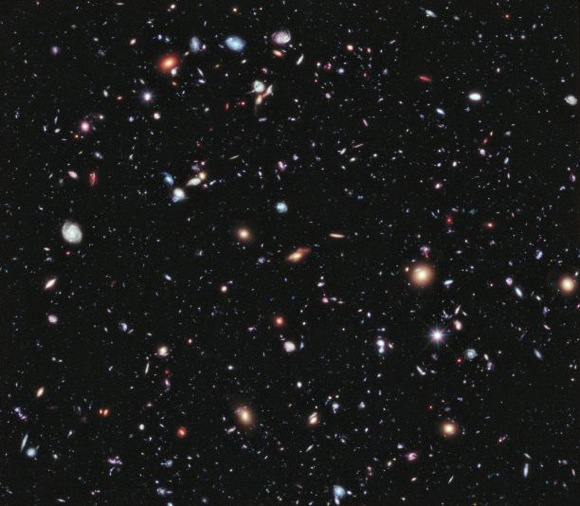 Thompson computed the predicted change in the ratio by the dark energy theory (generally referred to as rolling scalar fields) and found it did not fit the new data.

UA alumnus Brian Schmidt, along with Saul Perlmutter and Adam Reiss, won the 2011 Nobel Prize in Physics for showing that the expansion of the universe is accelerating rather than slowing down as previously thought.

The constant was reinstated with a different value that produces the observed acceleration of the universe’s expansion. Physicists trying to calculate the value from known physics, however, get a number more than 10 to the power of 60 (one followed by 60 zeros) too large – a truly astronomical number.

That’s when physicists turned to new theories of dark energy to explain the acceleration.

The new physics model of dark energy that Thompson tested predicts that the fundamental constants will change by a small amount. Thompson identified a method of measuring the proton to electron mass ratio in the early universe several years ago, but it is only recently that astronomical instruments became powerful enough to measure the effect. More recently, he determined the exact amount of change that many of the new theories predict.

Last month, a group of European astronomers, using a massive radio telescope in Germany, made the most accurate measurement of the proton-to-electron mass ratio ever accomplished and found that there has been no change in the ratio to one part in 10 million at a time when the universe was about half its current age, around 7 billion years ago.

When Thompson put this new measurement into his calculations, he found that it excluded almost all of the dark energy models using the commonly expected values or parameters. If the parameter space or range of values is equated to a football field, then almost the whole field is out of bounds except for a single 2-inch by 2-inch patch at one corner of the field. In fact, most of the allowed values are not even on the field.

“In effect, the dark energy theories have been playing on the wrong field,” Thompson said. “The 2-inch square does contain the area that corresponds to no change in the fundamental constants, and that is exactly where Einstein stands.”

Thompson expects that physicists and astronomers studying cosmology will adapt to the new field of play, but for now, “Einstein is in the catbird seat, waiting for everyone else to catch up.”