Dangerous storms peaking further north, south than in the past, says new study

Powerful, destructive hurricanes and typhoons are now reaching their peak intensity farther from the equator and closer to the poles, according to a new analysis. 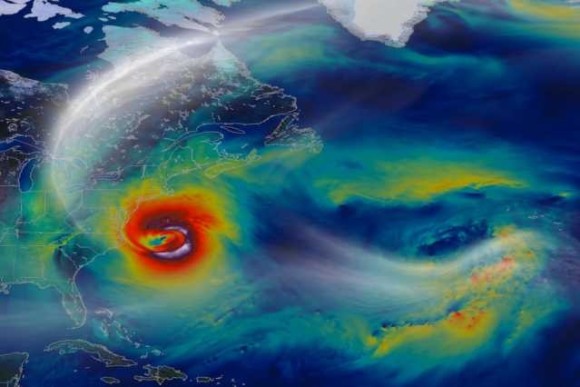 A new study co-authored by an MIT scientist of tropical cyclones shows migration away from tropics and toward the poles in recent decades.

“The absolute value of the latitudes at which these storms reach their maximum intensity seems to be increasing over time, in most places,” says Kerry Emanuel, an MIT professor and co-author of the new paper. “The trend is statistically significant at a pretty high level.”

And while the scientists who conducted the study are still investigating the atmospheric mechanisms behind this change, the trend seems consistent with a warming climate.

“It may mean the thermodynamically favorable conditions for these storms are migrating poleward,” adds Emanuel, the Cecil and Ida Green Professor of Earth and Planetary Sciences at MIT.

The implications are serious, since the movement of peak intensity means regions further north and south of the equator, which have not previously had to face many landfalls by violent cyclones, may now have greater exposure to these extreme weather events. That, in turn, could lead to “potentially profound consequences to life and property,” the paper states. “Any related changes to positions where storms make landfall will have obvious effects on coastal residents and infrastructure.”

Moving with the trade winds?

To conduct the study, the scientists used international data from 1982 to 2012, collected by NOAA’s National Climatic Data Center. They used the location of peak intensity of cyclones as a benchmark because it is a more consistent metric than statistics such as storm duration: The duration can be harder to estimate because of difficulties in establishing precisely when a storm should first be considered a tropical cyclone.

While there are regional differences in the poleward movement of cyclones, the fact that every ocean basin other than the northern Indian Ocean has experienced this change leads the researchers to suggest, in the paper, that this “migration away from the tropics is a global phenomenon.”

However, Emanuel notes, the global mechanisms underlying the trend are a matter for further research.

“We think, but have not yet been able to establish, that this is connected to independently observed poleward expansion of the Hadley circulation,” Emanuel says, referring to a large-scale pattern of global winds, which in recent years has also moved further poleward. The paper notes the potential impact of vertical wind shear, which inhibits cyclone formation; data suggests a decrease in wind shear in the tropics and an increase at higher latitudes.

Emanuel notes that researchers in the field are continuing to examine the links between storm migration and global warming. Over the past three decades, the incidence of cyclones in the tropics has actually diminished — because while tropical cyclones may become more intense in a warmer climate, it is actually more difficult to generate them.

Ocean temperatures between 82 and 86 degrees Fahrenheit seem to be “ideal for the genesis of tropical cyclones,” Emanuel says, “and as that belt migrates poleward, which surely it must as the whole ocean warms, the tropical cyclone genesis regions might just move with it. But we have more work to do to nail it down.”

Michael Mann, a professor of meteorology and director of the Earth System Science Center at Penn State University, says the matter of cyclone migration is “a very interesting new angle on the larger issue of how climate change may be impacting tropical cyclone activity.”
Overall, Mann adds, “The findings seem quite plausible. We know that human-caused climate change is leading to a poleward shift in certain features of the atmospheric circulation. … It would be surprising if these shifts were not influencing tropical cyclones. This study shows that they are, by causing a poleward migration in the zones where atmospheric shear is either favorable or prohibitive to tropical cyclone formation.” In practical terms, he says, the result may have “considerable implications” for coastal cities in the long term.