For the first time, an elusive step in the process of human DNA replication has been demystified

According to senior author Stephen J. Benkovic, an Evan Pugh Professor of Chemistry and Holder of the Eberly Family Chair in Chemistry at Penn State, the scientists “discovered how a key step in human DNA replication is performed.” The results of the research was published today (April 2) in the journal eLife.

Part of the DNA replication process — in humans and in other life forms — involves loading of molecular structures called sliding clamps onto DNA. This crucial step in DNA replication had remained somewhat mysterious and had not been well studied in human DNA replication. Mark Hedglin, a post-doctoral researcher in Penn State’s Department of Chemistry and a member of Benkovic’s team, explained that the sliding clamp is a ring-shaped protein that acts to encircle the DNA strand, latching around it like a watch band. The sliding clamp then serves to anchor special enzymes called polymerases to the DNA, ensuring efficient copying of the genetic material. “Without a sliding clamp, polymerases can copy very few bases — the molecular ‘letters’ that make up the code of DNA — at a time. But the clamp helps the polymerase to stay in place, allowing it to copy thousands of bases before being removed from the strand of DNA,” Hedglin said. 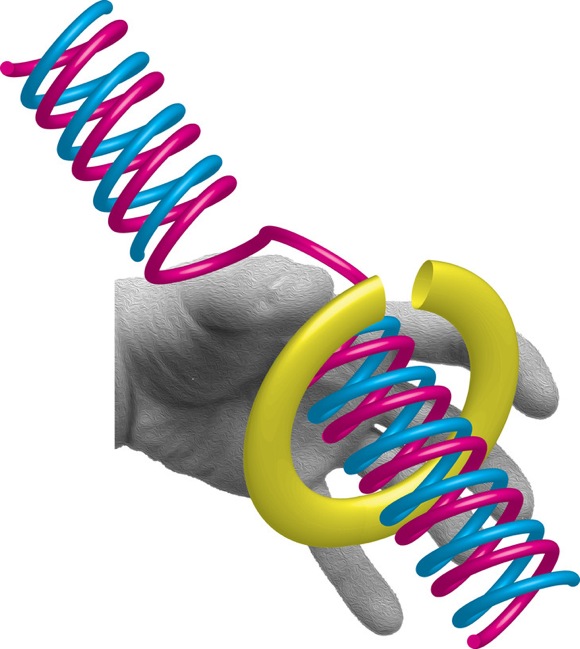 Stephen J. Benkovic, Mark Hedglin, and other members of Professor Benkovic’s research team have studied the importance of “clamp loader” enzymes and their activities during DNA replication. In this image, the clamp loader is represented, for illustrative purposes, by a hand, which is loading the sliding clamp ring onto DNA. Image: Benkovic lab, Penn State University

To test this hypothesis, the team of researchers used a method called Förster resonance energy transfer (FRET), a technique of attaching fluorescent “tags” to human proteins and sections of DNA in order to monitor the interactions between them. “With these tags in place, we then observed the formation of holoenzymes — the active form of the polymerase involved in DNA replication, which consists of the polymerase itself along with any accessory factors that optimize its activity,” Hedglin said. “We found that whenever a sliding clamp is loaded onto a DNA template in the absence of polymerase, the clamp loader quickly removed the clamp so that free clamps did not build up on the DNA. However, whenever a polymerase was present, it captured the sliding clamp and the clamp loader then dissociated from the DNA strand.”

Benkovic noted that this mechanism provides a means for the cell to recycle scarce clamps when they are not in use for productive replication.

In addition to Benkovic and Hedglin, other Penn State researchers who contributed to the paper include Senthil K Perumal and Zhenxin Hu.