High-resolution stereo images of the southeast corner of the Amenthes Planum region on Mars, near to Palos crater and the mouth of a well-known sinuous valley, Tinto Vallis.

ESA’s Mars Express took a high-resolution stereo image on 13 January of the southeast corner of the Amenthes Planum region on Mars, near to Palos crater and the mouth of a well-known sinuous valley, Tinto Vallis.

At the bottom-center of the full-color image, and up close in the first perspective image, is a nearby shorter and wider valley, which is fed by a number of tributaries before it joins the mouth of Tinto Vallis as both empty into Palos crater, just off the bottom of the image.

The 190 km-long Tinto Vallis is seen in the context image and is named after the famous Rio Tinto river in the Andalucía region of Spain. It is believed to have formed around 3.7 billion years ago, during the early history of Mars. 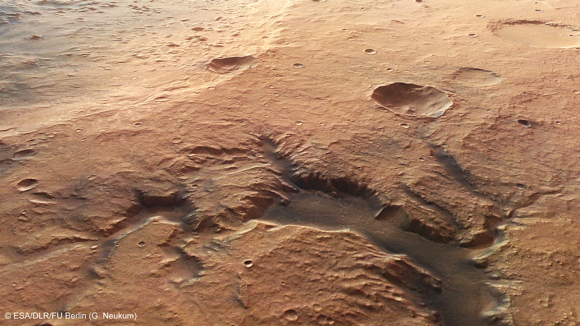 The network of shorter valleys shown in the first perspective image is thought to have formed through volcanic activity melting subsurface ice and liberating water to the Martian surface via seeps and springs.

If underground water emerges to the surface from the side of a slope — a process that planetary geologists call ‘groundwater sapping’ — it weakens the ground above it, causing it to collapse. Over time, this process may lead to the formation of steep-sided U-shaped valleys.

Groundwater sapping is believed to be responsible for erosion seen in many of the valley networks on the Red Planet.

Another eye-catching feature is the relatively deep 35 km-wide crater seen in the left-hand portion of the color, topographic and 3D images. Spectacular landslides along the crater’s walls can be seen and are particularly evident along the broken southern (left) rim. 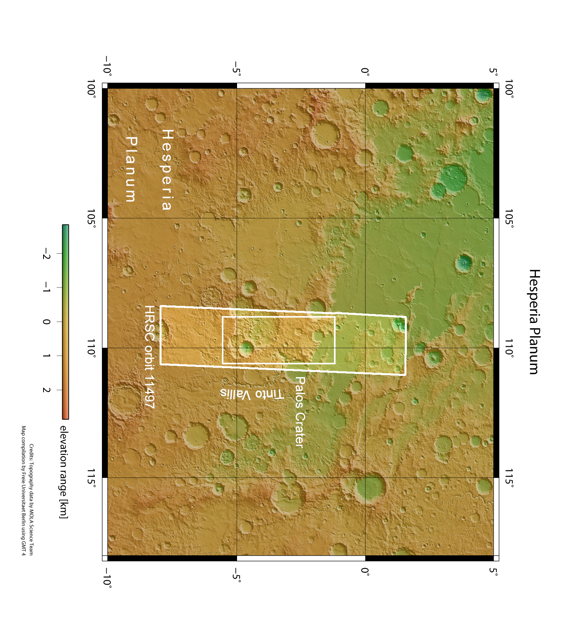 This crater sits on top of at least three older craters, the largest of which is 100 km wide and dominates the whole top left half of the 2D and 3D anaglyph images. The western rim of this crater continues beyond the image frame, and can be more easily distinguished in the context image.

The floor of this 100 km-wide crater is chaotic, with flat-topped geological features called mesas, and their smaller siblings, buttes, littering the floor. These are probably the result of the removal of subsurface water ice leading to the collapse of weaker material around them, leaving these more resistant high-sided features behind.

On Earth, the desert regions in Utah are home to many examples of these types of formation. 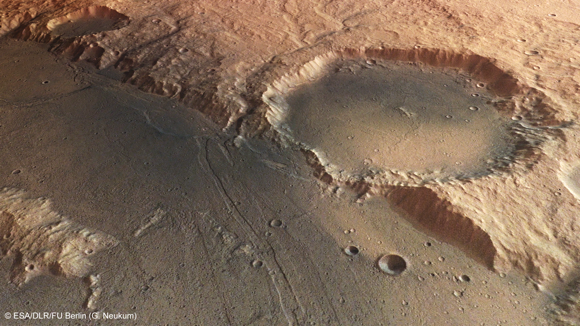 Toward the north (right) side of the 2D images, several smaller craters display very smooth and flat floors, from infilling by sediments.

The darker regions to the far north and south shown most clearly in the first color image are covered in wind-transported basaltic sands.

The smooth low-lying region to the far right and shown in the second perspective image is a small trough that feeds into the broader lava field of Amenthes Planum. The trough has likely been modified by the outflow of material from the ancient lake that may have once existed in Palos crater, the rim of which can only just be seen at the bottom of the color, topographic and 3D images.

This smooth, channel-like feature brushes against the rim of a 30 km-wide crater, and both have been covered with dark wind-blown materials.

With these recent images, Mars Express continues to show the similarities between regions on Mars with those on our home planet.