Comet ISON is a first-time visitor from the Oort Cloud surrounding our solar system. Will it survive its November 28 brush with the sun and emerge as a bright comet? 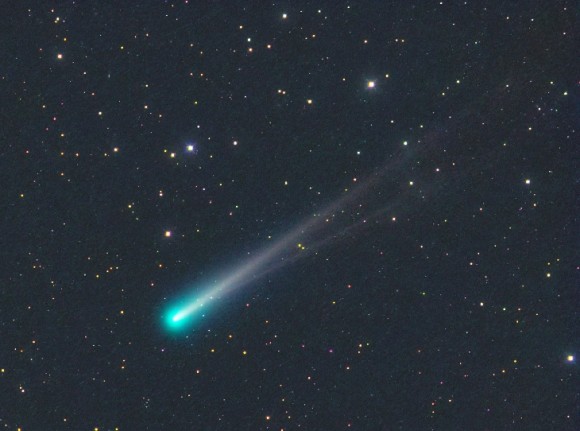 Many media are reporting today that Comet ISON has had an outburst.

Comet ISON is now inside the orbit of Earth as it plunges headlong toward the sun for a fiery close encounter on Nov. 28th. Although the comet is not yet as bright as many forecasters predicted, the comet is putting on a good show for observatories around the solar system. NASA spacecraft and amateur astronomers alike are snapping crisp pictures of the comet’s gossamer green atmosphere and filamentary double-tail.

Because ISON has never passed through the inner solar system before (it is a first-time visitor from the distant Oort cloud), experts aren’t sure what will happen next. Can the comet survive its Thanksgiving Day brush with the sun? Will it emerge as a bright naked-eye object?

Lowell Observatory astronomer Matthew Knight, a member of NASA’s Comet ISON Observing Campaign, lays out some of the possibilities.

“I’ve grouped the possible outcomes into three scenarios, discussed in chronological order,” says Knight. “It is important to note that no matter what happens, now that ISON has made it inside Earth’s orbit, any or all of these scenarios are scientifically exciting. We’re going to learn a lot no matter what.”

The first scenario, which could happen at any time, is that ISON spontaneously disintegrates. A small fraction (less than 1%) of comets have disintegrated for no apparent reason. Recent examples include Comet LINEAR (C/1999 S4) in 2000 and Comet Elenin (C/2010 X1) in 2011. ISON is now reaching the region of space, within ~0.8 AU of the Sun where comets like these have disintegrated.

Comet ISON is being observed by a tremendous variety of telescopes on Earth and beyond. If ISON does disintegrate, it would be the best-observed case of cometary disruption in history and would likely contribute vast new information about how comets die. 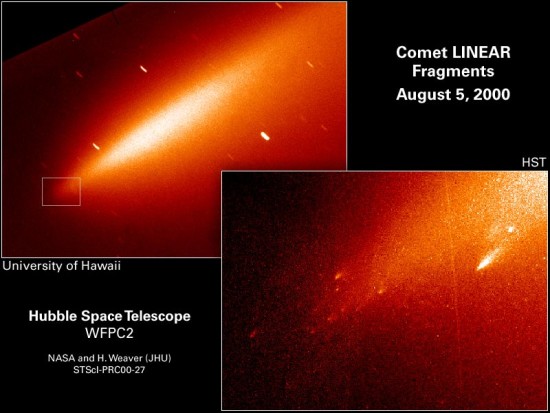 Will Comet ISON break into fragments, as Comet LINEAR did in the year 2000? Read more about LINEAR’s disintegration here.

#2 Death by sunburn around Thanksgiving Day

Assuming ISON survives the next few weeks intact, it faces an even more daunting challenge: making it around the sun. At closest approach to the sun, the comet’s equilibrium temperature will approach 5000 degrees Fahrenheit, hot enough to cause much of the dust and rock on ISON’s surface to vaporize.

While it may seem incredible that anything can survive this inferno, the rate at which ISON will likely lose mass is relatively small compared to the actual size of the comet’s nucleus. ISON needs to be 200 m wide to survive; current estimates are in the range 500 m to 2 km. It helps that the comet is moving very fast so it will not remain long at such extreme temperatures.
Unfortunately for ISON, it faces a double whammy from its proximity to the Sun: even if it survives the rapid vaporization of its exterior, it gets so close to the sun that the suns gravity might actually pull it apart.

Destroyed comets can still be spectacular, though. Sungrazing Comet Lovejoy, for instance, passed within 100,000 miles of the sun’s surface in December 2011. It disintegrated, forming a long tail of dust that wowed observers on Earth.

The final case is the most straightforward: ISON survives its brush with the sun and emerges with enough nuclear material to continue as an active comet. If ISON survives in tact, it would likely lose enough dust near the Sun to produce a nice tail. In a realistic best-case scenario, the tail would stretch for tens of degrees and light up the early morning sky like Comet McNaught (C/2006 P1) did in 2007.

The best of all possible worlds would be if ISON broke up just a bit, say, into a few large pieces. This would throw out enough extra material to make the comet really bright from the ground, while giving astronomers pieces of a comet to study for months to come.

“Regardless of what happens, we’re going to be thrilled,” he predicts. “Astronomers are getting the chance to study a unique comet traveling straight from 4.5 billion years of deep freeze into a near miss with the solar furnace using the largest array of telescopes in history.”
“Hang on,” he says, “because this ride is just getting started.”