As Comet ISON sweeps past Mars October 1, most observations will happen

NASA and ESA announced earlier they were readying a flotilla of spacecraft to record the comet’s passage near Mars. How much will the U.S. government shutdown interfere? Not much, it seems.

UPDATE OCTOBER 1, 2013 1945 UTC (2:45 p.m. CDT) Jet Propulsion Laboratory spokesperson Jane Platt said in an emailed statement this afternoon that since JPL employees are contractors, not direct employees of the federal government, Mars rover operations will continue for the moment. Presumably that include observations of Comet ISON.

OCTOBER 1, 2013 1700 UTC (noon CDT). Despite the U.S. government shutdown today, it appears that many planned observations of Comet ISON – as it sweeps dramatically close to the planet Mars today – will happen. NASA has a skeleton crew in support of the six crew members aboard International Space Station (ISS) in place, so presumably they will observe Comet ISON today, as previously announced. Likewise, the Mars Reconnaissance Orbiter’s HiRISE instrument will be turned in Comet ISON’s direction today, according to Anjani Polit, the HiRISE Uplink Lead. She commented:

Any projects from the Jet Propulsion Laboratory and Applied Physics Laboratory will go on as planned.

NASA did outline plans, which it sent to the Office of Management and Budget this past Friday (September 27), in the event of a shutdown. In the plans, NASA said that most of its employees — about 18,000 people — would stop working, but some (less than 600) would come to work to keep its property safe and to support those at the International Space Station. We heard earlier today that – just days after NASA’s Curiosity rover on Mars turned up water in the Martian soil and on the same day that this rover and a suite of other NASA spacecraft were due to observe Comet ISON – the rover Curiosity was being placed in temporary hibernation due to the U.S. government shutdown, but we have not confirmed this. While scanning for information earlier today, I also found that NASA’s central website at www.NASA.gov is displaying the following message:

Due to the lapse in federal government funding, this website is not available.

We’ll have more information as it becomes available.

ORIGINAL ARTICLE BEGINS HERE. On Tuesday (October 1, 2013), this year’s most anticipated comet – Comet ISON – will sweep closely past the Red Planet Mars. It’ll be on its way to a Thanksgiving Day (November 28) encounter with the sun, and hopefully to a good showing in Earth’s night sky. Right now, amateur astronomers with telescopes and photographic equipment are the main ones capturing images of Comet ISON. And they are sure to be trying already to captured Mars and the comet in the same photo in the predawn sky. But NASA and ESA are also readying a flotilla of spacecraft in Mars orbit or on Mars’ surface, which will attempt to record the comet’s passage near Earth’s neighboring planet.

And we do mean near. On October 1, Comet ISON will pass within 0.07 AU from Mars. That’s about six times closer than the comet will ever come to Earth.

NASA says an “unprecedented” number of NASA spacecraft – 16 – plus astronauts aboard the International Space Station will be observing the comet.

Look here for a finder chart showing the comet’s location in October. See how close it is to Mars?

Mars rovers and satellites – including Mars Express, Mars Reconnaissance Orbiter and rovers on the planet’s surface – might get a close-up view. We say might because it’s not certain yet just how good a view the rovers will get, at the comet’s current brightness. ISON is fainter than anticipated when it was discovered in late 2012. But recent photos show a greenish color to the comet, a sign that the comet has crossed the “frost line,” a place outside Mars’ orbit where solar heating is enough to start vaporizing ices on ISON’s surfaces.

NASA scientists said earlier this year they believe the best bet for capturing great views of Comet ISON during its Mars passage will be NASA’s Mars Reconnaissance Orbiter. The MRO satellite is equipped with a powerful half-meter telescope (called HiRISE) that will be able to detect the comet’s atmosphere and tail. Scientists hope this spacecraft, or one of the others, or all of them combined, will enable them to learn how large Comet ISON’s nucleus is. Astronomer Carey Lisse of the Johns Hopkins University Applied Physics Lab explained the reason for the fascination with ISON’s nucleus:

If ISON’s nucleus is much bigger than 0.5 km, it will probably survive its Thanksgiving Day brush with the sun.

And an intact nucleus could mean a bright comet in the skies visible from Earth in early December. 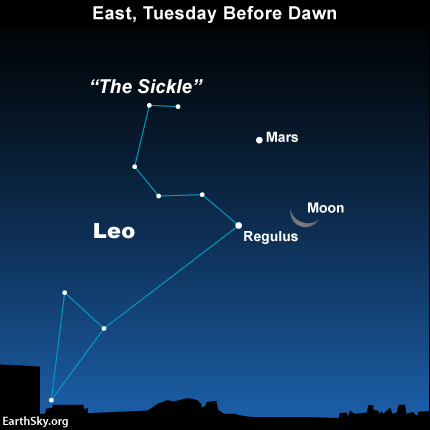 Want to see Mars on October 1? It’ll be easy, if you get up early and have a clear view to the east. The waning crescent moon will be near Mars in the predawn sky. Read more about the moon and Mars on October 1.

So keep an eye out of some very interesting pictures – and info – about Comet ISON near Mars in the coming days!

Bottom line: Comet ISON will sweep closely past Mars on October 1, 2013. NASA spacecraft will be turned in its direction, in hopes of capturing some great photos and new information.

Read more about Comet ISON’s brush past Mars, via NASA