The Goffin’s cockatoo’s use and fashioning of objects as tools has rarely been seen in the animal kingdom.

Goffin’s cockatoos are a highly playful and curious Indonesian cockatoo species. Therefore, cognitive biologists are now using them as a model species to investigate intelligent behaviour in birds. Together with researchers from the University of Oxford, Alice Auersperg and Birgit Szabo from the Department of Cognitive Biology at the University of Vienna have made a sensational discovery: “We were able to film the cockatoo ‘Figaro’ using its powerful beak to cut long splinters out of wooden beams or breaking off and modifying a side arm of a branch, to rake in a nut that was out of its direct reach”, explains Alice Auersperg, who led the study. 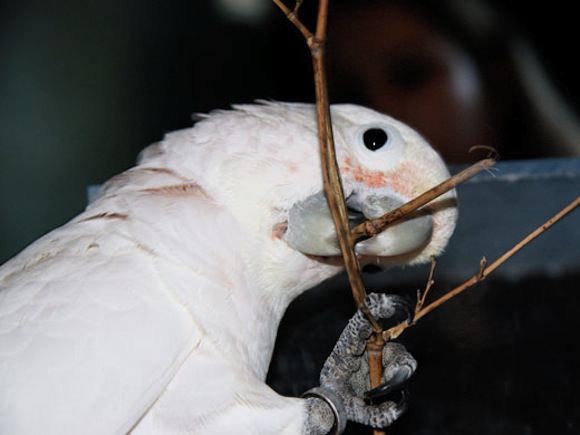 The right tool for every nut
For the researchers it came as a surprise that Figaro used a tool at all, and more so, that the he made it by himself. The most important observation was that the cockatoo, after having managed to fashion his first tool, knew what to do without hesitation in further experiments. “Figaro made a new tool for every nut we placed there and each time the bird was successful in obtaining it”, reports the cognitive biologist. Goffin’s cockatoos are highly explorative known to be good problem solvers in technical areas, and large-brained. However, they are unlikely to be habitual tool users in the wild. “Until now Figaro is the only one in his species in which we could observe this behaviour so far”, Birgit Szabo says. His feat demonstrates that tool craftsmanship can emerge from non-specialized intelligence.

Evolution of intelligence
“It is still difficult to identify cognitive operations. Figaro, and his predecessor Betty, may help us unlock many unknowns in the evolution of intelligence”, Alex Kacelnik, professor at the University of Oxford, explains. He is one of the authors of the study and was also involved in another study about the famous New Caledonian crow Betty: She surprised experts by fashioning hooks out of wire, to fish food out of a pipe. Even though this species uses tools in the wild, there was no precedent of this form of tool making, and the case is still considered to be a striking example of individual creativity and innovation.

“For a long time such talents have only been attributed to our closest relatives, the great apes. Since then, however, tool use has been reported in capuchin monkeys, some birds and even some invertebrates”, Alice Auersperg explains. While the tool-using club is admitting new members, scientists are still puzzling over the roles of intelligence, culture and ecology in promoting and supporting such competences.

Via University of Vienna