Researchers have found that cells in our bodies carry out something similar to a game of tag to coordinate their movement in a particular direction.

Researchers from the University of Barcelona and the Institute for Bioengineering of Catalonia (IBEC), together with researchers from King’s College London and University College London have found that cells in our bodies, when moving collectively, carry out something similar to a game of tag to coordinate their movement in a particular direction. 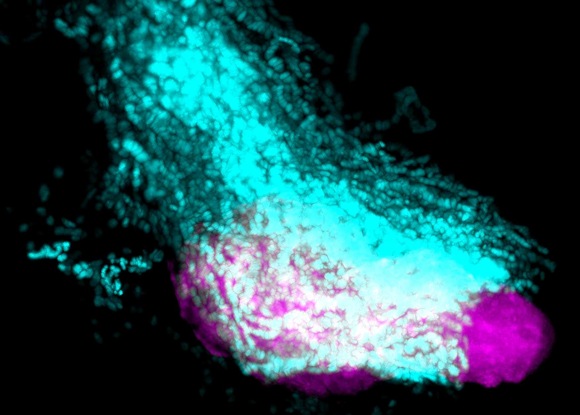 Scientists from Barcelona and London, looked at cells in the neural crest, a very mobile embryonic structure in vertebrates that gives rise to most of the peripheral nervous system and to other cell types in the cardiovascular system, pigment cells in the skin, and some bones, cartilage, and connective tissue in the head. Researchers saw that, during development, these neural crest cells ‘chase’ other types of cells —so-called placodal cells that give rise to the sensory organs— which dash away when approached, thus propelling the cell sheet in a certain direction.

“The effect can also be likened to a donkey and carrot effect, with the neural crest cells —the donkey— chasing but never quite reaching the carrot, the placodal cells,” explains Xavier Trepat, ICREA Research Professor of the UB and of the IBEC. “The ‘chasing’ occurs when a signaling protein, Sdf1, is present, while the ‘run’ effect is triggered by a different protein, N-Cadherin”, he adds.

Researchers’ findings shed new light on collective cell migration, a critical process in development and wound healing, but which is also inherent to the development of diseases such as cancer. Understanding more about how and why cells move the way they do can lead to valuable insights into how and why cancers occur and spread.