Bursts of star formation in the early universe

Galaxies have been experiencing vigorous bursts of star formation from much earlier in cosmic history than previously thought, according to new observations.

These so-called starburst galaxies produce stars at a prodigious rate—creating the equivalent of a thousand new suns per year. Now the astronomers have found starbursts that were churning out stars when the universe was just a billion years old. Previously, astronomers didn’t know whether galaxies could form stars at such high rates so early in time.

The discovery enables astronomers to study the earliest bursts of star formation and to deepen their understanding of how galaxies formed and evolved. The team describes their findings in a paper being published online on March 13 in the journal Nature and in two others that have been accepted for publication in the Astrophysical Journal. 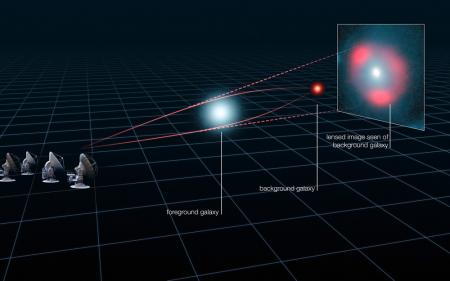 Light rays from a distant galaxy are deflected due to the gravity of a massive, foreground galaxy, as predicted by Einstein’s theory of general relativity. This makes the background galaxy appear as multiple magnified images surrounding the foreground galaxy. Credit: ALMA (ESO/NRAO/NAOJ), L. Calçada (ESO), Y Hezaveh et al.

Shining with the energy of over a hundred trillion suns, these newly discovered galaxies represent what the most massive galaxies in our cosmic neighborhood looked like in their star-making youth. “I find that pretty amazing,” says Joaquin Vieira, a postdoctoral scholar at Caltech and leader of the study. “These aren’t normal galaxies. They were forming stars at an extraordinary rate when the universe was very young—we were very surprised to find galaxies like this so early in the history of the universe.”

The astronomers found dozens of these galaxies with the South Pole Telescope (SPT), a 10-meter dish in Antarctica that surveys the sky in millimeter-wavelength light—which is between radio waves and infrared on the electromagnetic spectrum. The team then took a more detailed look using the new Atacama Large Millimeter Array (ALMA) in Chile’s Atacama Desert.

The new observations represent some of ALMA’s most significant scientific results yet, Vieira says. “We couldn’t have done this without the combination of SPT and ALMA,” he adds. “ALMA is so sensitive, it is going to change our view of the universe in many different ways.”

The astronomers only used the first 16 of the 66 dishes that will eventually form ALMA, which is already the most powerful telescope ever constructed for observing at millimeter and submillimeter wavelengths.

With ALMA, the astronomers found that more than 30 percent of the starburst galaxies are from a time period just 1.5 billion years after the big bang. Previously, only nine such galaxies were known to exist, and it wasn’t clear whether galaxies could produce stars at such high rates so early in cosmic history. Now, with the new discoveries, the number of such galaxies has nearly doubled, providing valuable data that will help other researchers constrain and refine theoretical models of star and galaxy formation in the early universe. 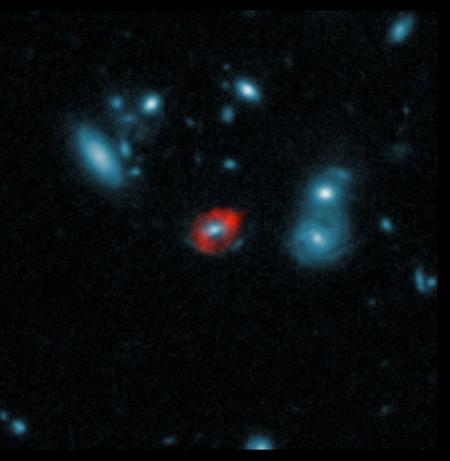 One of the SPT-discovered sources observed by ALMA and the Hubble Space Telescope (HST). The massive central galaxy (in blue, seen by HST) bends the light from a more distant galaxy that’s bright in submillimeter wavelengths, forming a ring-like image of the background galaxy, which is observed by ALMA (red).
Credit: ALMA (ESO/NRAO/NAOJ), J. Vieira et al.

But what’s particularly special about the new findings, Vieira says, is that the team determined the cosmic distance to these dusty starburst galaxies by directly analyzing the star-forming dust itself. Previously, astronomers had to rely on a cumbersome combination of indirect optical and radio observations using multiple telescopes to study the galaxies. But because of ALMA’s unprecedented sensitivity, Vieira and his colleagues were able make their distance measurements in one step, he says. The newly measured distances are therefore more reliable and provide the cleanest sample yet of these distant galaxies.

The measurements were also made possible because of the unique properties of these objects, the astronomers say. For one, the observed galaxies were selected because they could be gravitationally lensed—a phenomenon predicted by Einstein in which another galaxy in the foreground bends the light from the background galaxy like a magnifying glass. This lensing effect makes background galaxies appear brighter, cutting the amount of telescope time needed to observe them by 100 times. 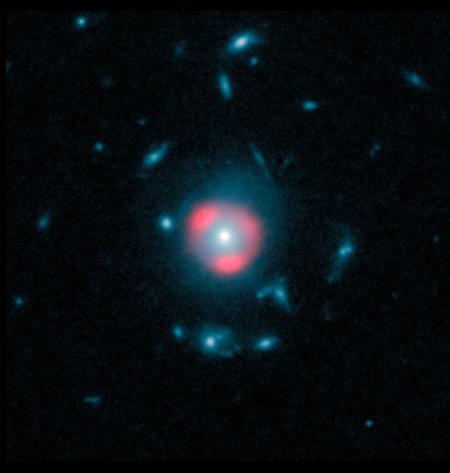 One of the SPT-discovered sources observed by ALMA and the Hubble Space Telescope (HST). The massive central galaxy (in blue, seen by HST) bends the light from a more distant galaxy that’s bright in submillimeter wavelengths, forming a ring-like image of the background galaxy, which is observed by ALMA (red).
Credit: ALMA (ESO/NRAO/NAOJ), J. Vieira et al.

Secondly, the astronomers took advantage of a fortuitous feature in these galaxies’ spectra—which is the rainbow of light they emit—dubbed the “negative K correction.” Normally, galaxies appear dimmer the farther away they are—in the same way a lightbulb appears fainter the farther away it is. But it turns out that the expanding universe shifts the spectra in such a way that light in millimeter wavelengths doesn’t appear dimmer at greater distances. As a result, the galaxies appear just as bright in these wavelengths no matter how far away they are—like a magic lightbulb that appears just as bright no matter how distant it is.

“To me, these results are really exciting because they confirm the expectation that when ALMA is fully available, it can really allow astronomers to probe star formation all the way up to the edge of the observable universe,” says Fred Lo, who, while not a participant in the study, was recently a Moore Distinguished Scholar at Caltech. Lo is a Distinguished Astronomer and Director Emeritus at the National Radio Astronomy Observatory, the North American partner of ALMA.

Additionally, observing the gravitational lensing effect will help astronomers map the dark matter—the mysterious unseen mass that makes up nearly a quarter of the universe—in the foreground galaxies. “Making high-resolution maps of the dark matter is one of the future directions of this work that I think is particularly cool,” Vieira says.

These results represent only about a quarter of the total number of sources discovered by Vieira and his colleagues with the SPT, and they anticipate finding additional distant, dusty, starburst galaxies as they continue analyzing their data set. The ultimate goal for astronomers, Lo says, is to observe galaxies at all wavelengths throughout the history of the universe, piecing together the complete story of how galaxies have formed and evolved. So far, astronomers have made much progress in creating computer models and simulations of early galaxy formation, he says. But only with data—such as these new galaxies—will we ever truly piece together cosmic history. “Simulations are simulations,” he says. “What really counts is what you see.” 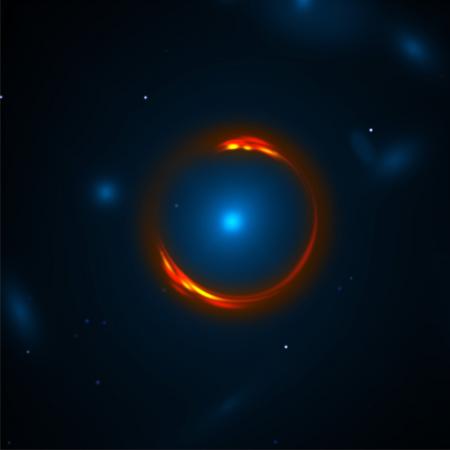 Artist’s impression of one of the SPT-discovered sources based on observations by ALMA and the Hubble Space Telescope (HST). The massive central galaxy (in blue, seen by HST) bends the light from a more distant galaxy that’s bright in submillimeter wavelengths, forming a ring-like image of the background galaxy, which is observed by ALMA (red). Credit: Y. Hezaveh

In addition to Vieira, the other Caltech authors on the Nature paper are Jamie Bock, professor of physics; Matt Bradford, visiting associate in physics; Martin Lueker-Boden, postdoctoral scholar in physics; Stephen Padin, senior research associate in astrophysics; Erik Shirokoff, a postdoctoral scholar in astrophysics with the Keck Institute for Space Studies; and Zachary Staniszewski, a visitor in physics. There are a total of 70 authors on the paper, which is titled “High-redshift, dusty, starburst galaxies revealed by gravitational lensing.” This research was funded by the National Science Foundation, the Kavli Foundation, the Gordon and Betty Moore Foundation, NASA, the Natural Sciences and Engineering Research Council of Canada, the Canadian Research Chairs program, and the Canadian Institute for Advanced Research.

The South Pole Telescope (SPT) is a 10-meter telescope located at the National Science Foundation (NSF) Amundsen-Scott South Pole Station, which lies within one kilometer of the geographic south pole. The SPT is designed to conduct low-noise, high-resolution surveys of the sky at millimeter and submillimeter wavelengths, with the particular design goal of making ultrasensitive measurements of the cosmic microwave background (CMB). The first major survey with the SPT was completed in October 2011 and covers 2,500 square degrees of the southern sky in three millimeter-wave observing bands. This is the deepest large millimeter-wave data set in existence and has already led to many groundbreaking science results, including the first detection of galaxy clusters through their Sunyaev-Zel’dovich effect signature, the most sensitive measurement yet of the small-scale CMB power spectrum, and the discovery of a population of ultrabright, high-redshift, star-forming galaxies. The SPT is funded primarily by the Division of Polar Programs in NSF’s Geoscience Directorate. Partial support also is provided by the Kavli Institute for Cosmological Physics (KICP), an NSF-funded Physics Frontier Center; the Kavli Foundation; and the Gordon and Betty Moore Foundation. The SPT collaboration is led by the University of Chicago and includes research groups at Argonne National Laboratory, the California Institute of Technology, Cardiff University, Case Western Reserve University, Harvard University, Ludwig-Maximilians-Universität, the Smithsonian Astrophysical Observatory, McGill University, the University of Arizona, the University of California at Berkeley, the University of California at Davis, the University of Colorado at Boulder, and the University of Michigan, as well as individual scientists at several other institutions, including the European Southern Observatory and the Max-Planck-Institut für Radioastronomie in Bonn, Germany.