For humans, brown dwarf weather will always be rated as “extremely inclement” with temps of 2,000 degrees F (1,100 C) and clouds made of minute droplets of molten iron. 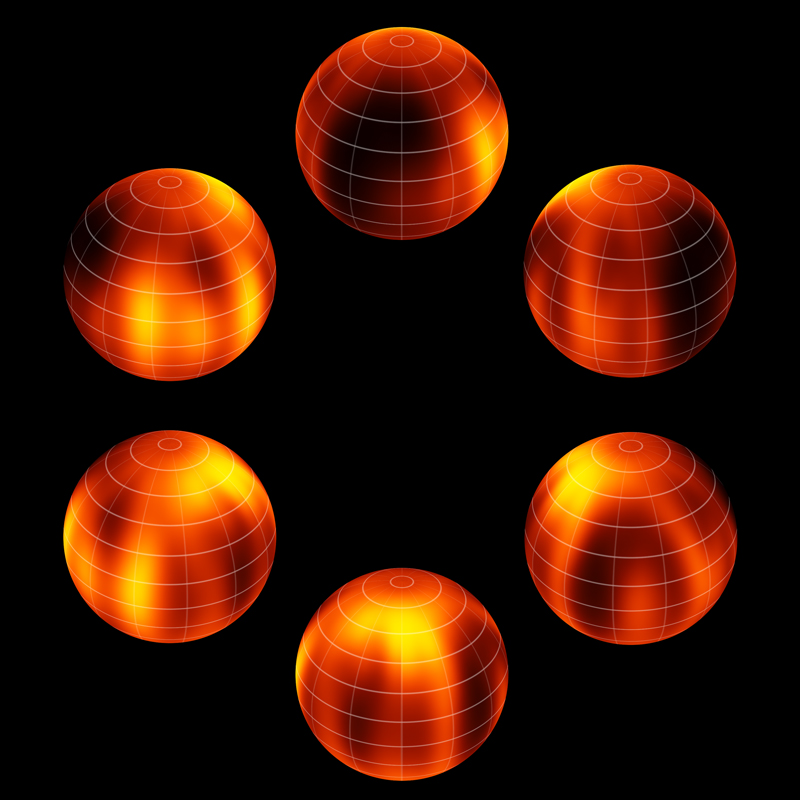 Studies of the brown dwarf system Luhman 16 has resulted in the first surface map of a brown dwarf and measurements of the objects’ atmospheres at different depths. Image via ESO / I. Crossfield

Astronomers have presented the first detailed study of the atmospheric features – the extraterrestrial weather patterns – of a brown dwarf (an object intermediate between planets and stars). The results include the first surface map of a brown dwarf and measurements at different wavelengths probing the atmosphere at different depths. They mark the beginning of an era in which astronomers will be able to compare models for cloud formation on brown dwarfs – and, eventually, on giant gas planets in distant star systems – with observations. The results are published in the January 30, 2014 issue of the journal Nature and in Astrophysical Journal Letters.

A brown dwarf is a peculiar object: more massive than a planet, but with insufficient mass for the nuclear fusion that powers stars to ignite in the object’s core. The discovery of a brown dwarf system a mere 6.5 light-years away from the Sun (only two star systems are closer than that!), announced in March 2013, presented astronomers with the opportunity to study such objects in more detail than ever before.

Now the results of two studies of the new objects, named Luhman 16A and 16B, are in – and promise the start of a new era of research on brown dwarfs.

The first study, led by Ian Crossfield of the Max Planck Institute for Astronomy, presents nothing less than a surface map of Luhman 16B, using a method known as Doppler imaging that has never before been applied to this type of object. Crossfield explains: “Previous observations have inferred that brown dwarfs have mottled surfaces, but now we can start to directly map them. What we see is presumably patchy cloud cover, somewhat like we see on Jupiter.”

The maps obtained by Crossfield and his colleagues correspond to very rough versions of satellite weather maps of our home planet. Crossfield adds: “In the future we will be able to watch cloud patterns form, evolve, and dissipate – eventually, maybe exo-meteorologists will be able to predict whether a visitor to Luhman 16B can expect clear or cloudy skies.”

For humans, however, Brown Dwarf weather will always be rated as “extremely inclement”. At temperatures of about 1100 C, the clouds detected by Crossfield, Biller and their colleagues are believed to be made of minute droplets of molten iron and various minerals, floating in an atmosphere that is mostly hydrogen.

The second study, led by Beth Biller (now at the University of Edinburgh, and previously at the Max Planck Institute for Astronomy), literally goes to greater depths. As brighter and darker clouds are moved into view and removed again by a brown dwarf’s rotation, its brightness will change. By simultaneously observing brightness variations at different wavelengths, Biller and her colleagues were able to reconstruct what happens in different layers of the atmosphere for both Luhman 16A and 16B.

Biller says: “We’ve learned that the weather pattern on these brown dwarfs are quite complex. The cloud structure of the brown dwarf varies quite strongly as a function of atmospheric depth and cannot be explained with a single layer of clouds.”

The new results are the beginning of new phase of brown dwarf research in which theoreticians construct models for brown dwarf clouds, which they can then test against observations.

Beth Biller adds: “The exciting bit is that this is just the start. With the next generations of telescopes, and in particular the 39 m European Extremely Large Telescope, we will likely see surface maps of more distant Brown Dwarfs – and eventually, a surface map for a young giant planet.”