It’s for observing Earth and is designed to overcome pitfalls that have plagued similar instruments in the past.

Literally years in the making, the new radiometer, which is designed to measure the intensity of electromagnetic radiation, specifically microwaves, is equipped with one of the most sophisticated signal-processing systems ever developed for an Earth science satellite mission. Its developers at NASA’s Goddard Space Flight Center in Greenbelt, Md., shipped the instrument to NASA’s Jet Propulsion Laboratory in Pasadena, Calif., where technicians will integrate it into the agency’s Soil Moisture Active Passive spacecraft, along with a synthetic aperture radar system developed by JPL. 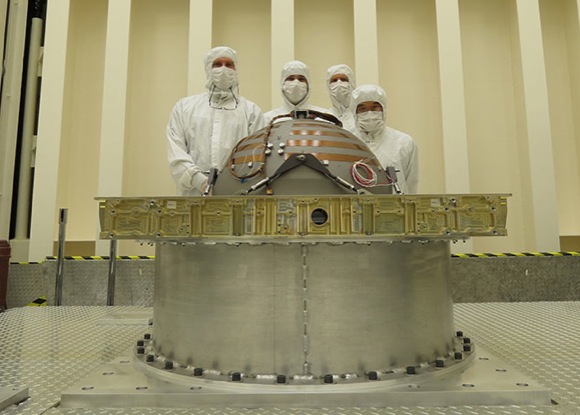 With the two instruments, the NASA mission will globally map soil moisture levels — data that will benefit climate models — when it begins operations a few months after its launch in late 2014. In particular, the data will give scientists the ability to discern global soil moisture levels, a crucial gauge for drought monitoring and prediction, and fill gaps in scientists’ understanding of the water cycle. Also important, it could help crack an unsolved climate mystery: the location of the places in the Earth system that store carbon dioxide.

Years in the Making

Building the new radiometer took years to accomplish and involved the development of advanced algorithms and an onboard computing system capable of crunching a deluge of data estimated at 192 million samples per second. Despite the challenges, team members believe they’ve created a state-of-the-art instrument that is expected to triumph over the data-acquisition troubles encountered by many other Earth-observing instruments.

The signal received by the instrument will have penetrated most non-forest vegetation and other barriers to gather the naturally emitted microwave signal that indicates the presence of moisture. The wetter the soil, the colder it will look in the data.

The instrument’s measurements include special features that allow scientists to identify and remove the unwanted “noise” caused by radio-frequency interference from the many Earth-based services that operate near the instrument’s microwave-frequency band. The same noise has contaminated some of the measurements gathered by the European Space Agency’s Soil Moisture and Ocean Salinity satellite and, to a certain extent, NASA’s Aquarius satellite. These spacecraft found that the noise was particularly prevalent over land.

“This is the first system in the world to do all this,” said Instrument Scientist Jeff Piepmeier, who came up with the concept at NASA Goddard.

Like all radiometers, the new instrument “listens” to the noises emanating from a very noisy planet.

Like a radio, it’s specifically tuned to a particular frequency band — 1.4 gigahertz or “L-Band” — that the International Telecommunication Union in Geneva, Switzerland, has set aside for radio astronomy and passive Earth remote-sensing applications. In other words, users only may listen to the “static” from which they can derive the moisture data.

Despite the prohibition, however, the band is far from pristine. “Radiometers listen to the desired signal in the spectrum band, as well as undesired signals that end up in the same band,” said Damon Bradley, a NASA Goddard digital signal-processing engineer who worked with Piepmeier and others to create the radiometer’s advanced signal-processing capabilities. As operators of SMOS quickly discovered shortly after the spacecraft’s launched in 2009, unwanted noise certainly exists in the signal.

As a result, the global soil-moisture maps generated by SMOS data sometimes contain blank, data-less patches. “Radio-frequency interference can be intermittent, random and unpredictable,” Bradley said. “There’s not a lot you can do about it.”

That’s why Bradley and others on Piepmeier’s team turned to technology. 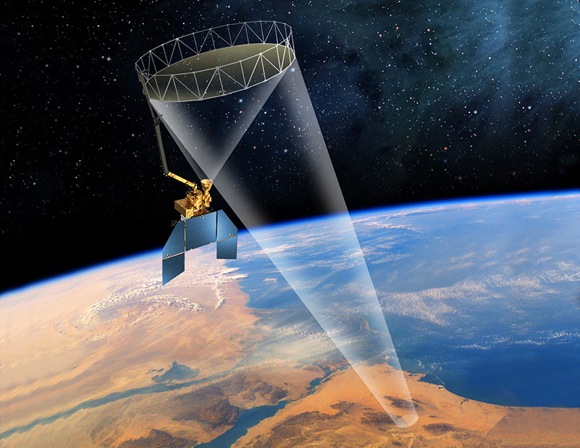 In 2005 Bradley, Piepmeier and other NASA Goddard engineers teamed with researchers at the University of Michigan and Ohio State University, who already had created algorithms, or step-by-step computational procedures, for mitigating radio interference. Together, they designed and tested a sophisticated digital-electronics radiometer that could use these algorithms to help scientists find and remove unwanted radio signals, thereby greatly increasing data accuracy and reducing areas where high-interference levels would impede measurements.

Conventional radiometers deal with fluctuations in microwave emissions by measuring signal power across a wide bandwidth and integrating it over a long time interval to get an average. The SMAP radiometer, however, will take those time intervals and slice them up into much shorter time intervals, making it easier to detect the rogue, human-produced RFI signals. “By chopping the signal in time, you can throw away the bad and give scientists the good,” Piepmeier said.

Another step in the radiometer’s development was the creation of a more powerful instrument processor. Because the current state-of-the-art flight processor — the RAD750 — is incapable of handling the radiometer’s expected torrent of data, the team had to develop a custom-designed processing system featuring more powerful, radiation-hardened field programmable gate arrays, which are specialized application-specific integrated circuits. These circuits are capable of withstanding the harsh, radiation-rich environment found in space.

The team then programmed these circuits to implement the University of Michigan-developed algorithms as flight signal-processing hardware. The team also replaced the detector with an analog digital converter and bolstered the overall system by creating ground-based signal-processing software to remove interference.

“SMAP has the most advanced digital processing-based radiometer ever built,” Piepmeier said. “It took years to develop the algorithms, the ground software, and the hardware. What we produced is the best L-band radiometer for Earth science.”