Striking differences in brain wiring between men and women

A new brain connectivity study from Penn Medicine published today in the Proceedings of National Academy of Sciences found striking differences in the neural wiring of men and women that’s lending credence to some commonly-held beliefs about their behavior.

In one of the largest studies looking at the “connectomes” of the sexes, Ragini Verma, PhD, an associate professor in the department of Radiology at the Perelman School of Medicine at the University of Pennsylvania, and colleagues found greater neural connectivity from front to back and within one hemisphere in males, suggesting their brains are structured to facilitate connectivity between perception and coordinated action. In contrast, in females, the wiring goes between the left and right hemispheres, suggesting that they facilitate communication between the analytical and intuition.

“These maps show us a stark difference–and complementarity–in the architecture of the human brain that helps provide a potential neural basis as to why men excel at certain tasks, and women at others,” said Verma. 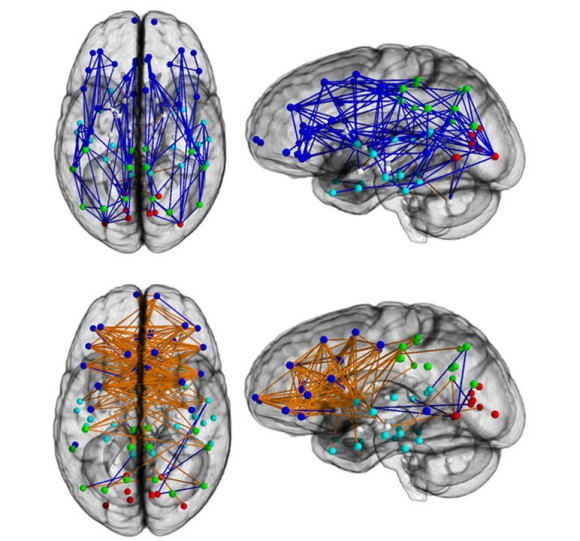 Brain networks show increased connectivity from front to back and within one hemisphere in males (upper) and left to right in females (lower). Image credit: Ragini Verma, Ph.D., Proceedings of National Academy of Sciences

For instance, on average, men are more likely better at learning and performing a single task at hand, like cycling or navigating directions, whereas women have superior memory and social cognition skills, making them more equipped for multitasking and creating solutions that work for a group. They have a mentalistic approach, so to speak.

Past studies have shown sex differences in the brain, but the neural wiring connecting regions across the whole brain that have been tied to such cognitive skills has never been fully shown in a large population.

In the study, Verma and colleagues, including co-authors Ruben C. Gur, PhD, a professor of psychology in the department of Psychiatry, and Raquel E. Gur, MD, PhD, professor of Psychiatry, Neurology and Radiology, investigated the gender-specific differences in brain connectivity during the course of development in 949 individuals (521 females and 428 males) aged 8 to 22 years using diffusion tensor imaging (DTI). DTI is water-based imaging technique that can trace and highlight the fiber pathways connecting the different regions of the brain, laying the foundation for a structural connectome or network of the whole brain.

This sample of youths was studied as part of the Philadelphia Neurodevelopmental Cohort, a National Institute of Mental Health-funded collaboration between the University of Pennsylvania Brain Behavior Laboratory and the Center for Applied Genomics at the Children’s Hospital of Philadelphia.

The brain is a roadmap of neural pathways linking many networks that help us process information and react accordingly, with behavior controlled by several of these sub-networks working in conjunction.

These connections likely give men an efficient system for coordinated action, where the cerebellum and cortex participate in bridging between perceptual experiences in the back of the brain, and action, in the front of the brain, according to the authors. The female connections likely facilitate integration of the analytic and sequential processing modes of the left hemisphere with the spatial, intuitive information processing modes of the right side.

The authors observed only a few gender differences in the connectivity in children younger than 13 years, but the differences were more pronounced in adolescents aged 14 to 17 years and young adults older than 17.

The findings were also consistent with a Penn behavior study, of which this imaging study was a subset of, that demonstrated pronounced sexual differences. Females outperformed males on attention, word and face memory, and social cognition tests. Males performed better on spatial processing and sensorimotor speed. Those differences were most pronounced in the 12 to 14 age range.

“It’s quite striking how complementary the brains of women and men really are,” said Dr. Ruben Gur. “Detailed connectome maps of the brain will not only help us better understand the differences between how men and women think, but it will also give us more insight into the roots of neuropsychiatric disorders, which are often sex related.”

Via University of Pennsylvania