A high moose population density and mild autumn weather result in a higher prevalence of deer keds (louse fly parasite). A great deal of pine forest in the habitat of the moose has the same effect.

Deer keds were first discovered in Norway in Halden in 1983. The parasite sucks blood, principally from cervids (moose, roe deer and red deer), but it also attacks humans and other livestock. In Finland, the parasite is regarded as a major obstacle to people’s enjoyment of nature during the autumn when it swarms, and there are reports of increasing numbers of cases of skin inflammation in people bitten by deer keds. 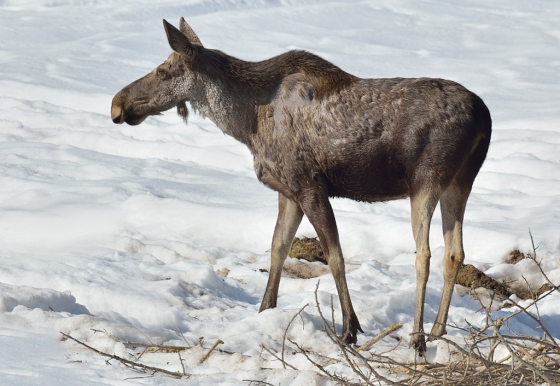 Knut Madslien has monitored the spread pattern of deer keds in Fennoscandia, produced a description of pathological hair loss in moose in Southeast Norway in 2006/7 and studied environmental factors which can be favourable for the parasite and possible pathogens in the deer ked and its host.

The spread pattern was studied with the help of questionnaires amongst hunters and by using the website www.flattogflue.no. The results showed that the parasite’s area of distribution now stretches from Lillesand in the south to Elverum in the north, with the greatest density along the border to Sweden.

The outbreak of hair loss in moose in Southeast Norway in 2006/7 was probably due to an extraordinary high prevalence of deer keds, which in turn was most probably caused by a combination of high moose density and the particularly mild autumn of 2006.

A study of 350 moose killed in seven municipalities in Southeast Norway revealed that the coats of all the animals were infested with keds, but the density of the parasites varied to a significant degree. Madslien points to a clear positive connection between the amount of pine forest in the habitat of the moose and the infestation intensity of deer keds in the coats of the moose.

Measuring the stress hormone cortisol in the moose’s coat was used as a method for appraising the long-term effect of the deer ked on the health and welfare of moose, but Madslien found that in general, there was little connection between the number of deer keds, the weight of moose at the time of slaughter and the level of cortisol in the hair. This indicates that moose can tolerate limited amounts of the parasite relatively well.

Via Norwegian School of Veterinary Science