Astronomers have used ESO’s New Technology Telescope and the NASA/ESA Hubble Space Telescope to explore more than 100 planetary nebulae in the central bulge of our galaxy. They have found that butterfly-shaped members of this cosmic family tend to be mysteriously aligned — a surprising result given their different histories and varied properties.

The final stages of life for a star like our Sun result in the star blowing its outer layers out into the surrounding space, forming objects known as planetary nebulae in a wide range of beautiful and striking shapes. One type of such nebulae, known as bipolar planetary nebulae, create ghostly hourglass or butterfly shapes around their parent stars. 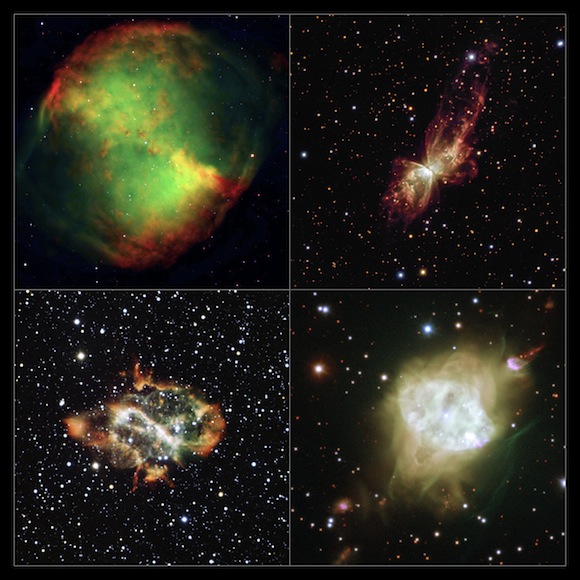 This group portrait shows four bipolar planetary nebulae imaged using ESO telescopes. Studies of similar objects in the central bulge of the Milky Way have revealed an unexpected alignment. The objects shown here are much closer to Earth than those used in the new study, but demonstrate the varied forms of these spectacular objects. Credit: ESO

All these nebulae formed in different places and have different characteristics. And neither the individual nebulae, nor the stars that formed them, would have interacted with other planetary nebulae. However, a new study by astronomers from the University of Manchester, UK, now shows surprising similarities between some of these nebulae: many of them line up in the sky in the same way [1].

“This really is a surprising find and, if it holds true, a very important one,” explains Bryan Rees of the University of Manchester, one of the paper’s two authors. “Many of these ghostly butterflies appear to have their long axes aligned along the plane of our galaxy. By using images from both Hubble and the NTT we could get a really good view of these objects, so we could study them in great detail.”

The astronomers looked at 130 planetary nebulae in the Milky Way’s central bulge. They identified three different types [2], and peered closely at their characteristics and appearance.

“While two of these populations were completely randomly aligned in the sky, as expected, we found that the third — the bipolar nebulae — showed a surprising preference for a particular alignment,” says the paper’s second author Albert Zijlstra, also of the University of Manchester. “While any alignment at all is a surprise, to have it in the crowded central region of the galaxy is even more unexpected.” 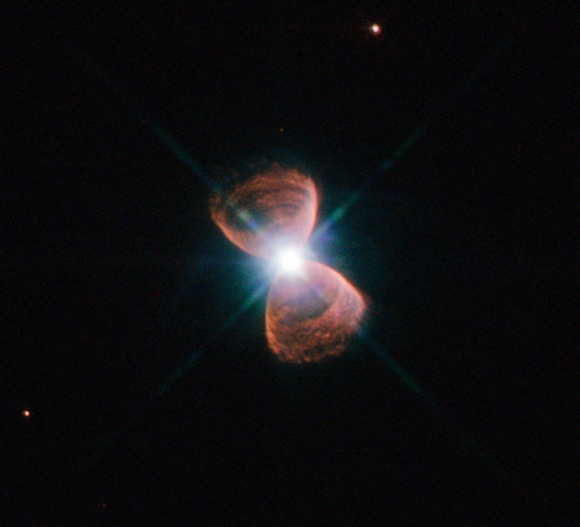 This image taken with the NASA/ESA Hubble Space Telescope shows an example of a bipolar planetary nebula. This object, which is known as Hubble 12 and also catalogued as PN G111.8-02.8, lies in the constellation of Cassiopeia. The striking shape of Hubble 12, reminiscent of a butterfly or an hourglass, was formed as a Sun-like star approached the end of its life and puffed its outer layers into the surrounding space. For bipolar nebulae, this material is funnelled towards the poles of the ageing star, creating the distinctive double-lobed structure. Credit: NASA, ESA

Planetary nebulae are thought to be sculpted by the rotation of the star system from which they form. This is dependent on the properties of this system — for example, whether it is a binary [3], or has a number of planets orbiting it, both of which may greatly influence the form of the blown bubble. The shapes of bipolar nebulae are some of the most extreme, and are probably caused by jets blowing mass from the binary system perpendicular to the orbit.

“The alignment we’re seeing for these bipolar nebulae indicates something bizarre about star systems within the central bulge,” explains Rees. “For them to line up in the way we see, the star systems that formed these nebulae would have to be rotating perpendicular to the interstellar clouds from which they formed, which is very strange.”

While the properties of their progenitor stars do shape these nebulae, this new finding hints at another more mysterious factor. Along with these complex stellar characteristics are those of our Milky Way; the whole central bulge rotates around the galactic centre. This bulge may have a greater influence than previously thought over our entire galaxy — via its magnetic fields. The astronomers suggest that the orderly behaviour of the planetary nebulae could have been caused by the presence of strong magnetic fields as the bulge formed. 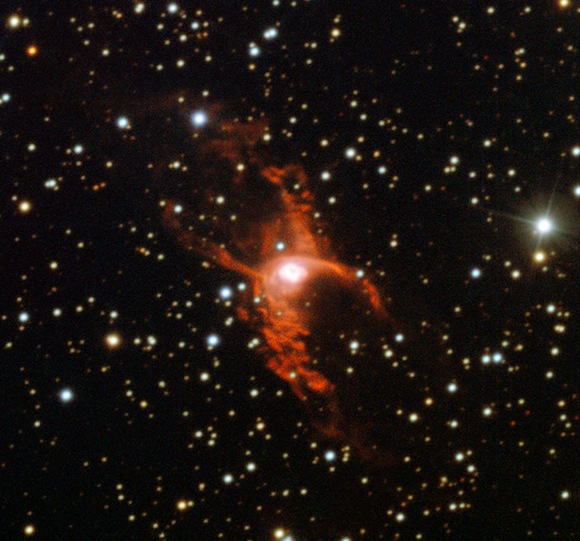 This image shows an example of a bipolar planetary nebula known as NGC 6537 taken with the New Technology Telescope at ESO’s La Silla Observatory. Credit: ESO

As such nebulae closer to home do not line up in the same orderly way, these fields would have to have been many times stronger than they are in our present-day neighbourhood [4].

“We can learn a lot from studying these objects,” concludes Zijlstra. “If they really behave in this unexpected way, it has consequences for not just the past of individual stars, but for the past of our whole galaxy.”

[2] The shapes of the planetary nebula images were classified into three types, following conventions: elliptical, either with or without an aligned internal structure, and bipolar.

[3] A binary system consists of two stars rotating around their common centre of gravity.

[4] Very little is known about the origin and characteristics of the magnetic fields that were present in our galaxy when it was young, so it is unclear whether they have grown stronger over time, or decayed.