Researchers at the Max Planck Institute for Ornithology and the University of Lausanne have discovered that the sleeping patterns of baby birds are similar to that of baby mammals. What is more, the sleep of baby birds appears to change in the same way as it does in humans. Studying barn owls in the wild, the researchers discovered that this change in sleep is strongly correlated with the expression of a gene involved in producing dark, melanic feather spots, a trait known to covary with behavioral and physiological traits in adult owls. These findings raise the intriguing possibility that sleep-related developmental processes in the brain contribute to the link between melanism and other traits observed in adult barn owls and other animals. 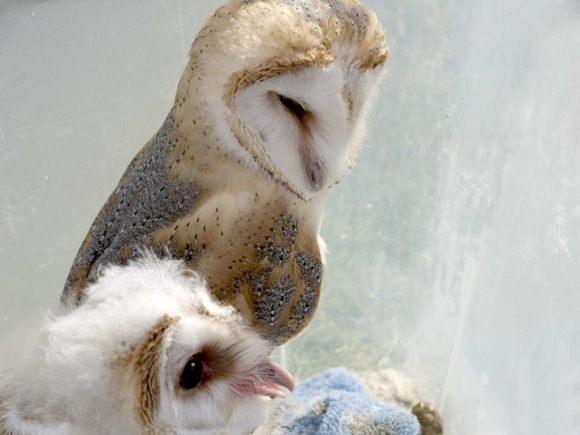 As they get older, baby owls change their sleeping patterns. The older they get, the less time they spent in REM sleep. Image credit: quasarphotos / Fotolia

Sleep in mammals and birds consists of two phases, REM sleep (“Rapid Eye Movement Sleep”) and non-REM sleep. We experience our most vivid dreams during REM sleep, a paradoxical state characterized by awake-like brain activity. Despite extensive research, REM sleep’s purpose remains a mystery. One of the most salient features of REM sleep is its preponderance early in life. A variety of mammals spend far more time in REM sleep during early life than when they are adults. For example, as newborns, half of our time asleep is spent in REM sleep, whereas last night REM sleep probably encompassed only 20-25% percent of your time snoozing.Although birds are the only non-mammalian group known to clearly engage in REM sleep, it has been unclear whether sleep develops in the same manner in baby birds.

Consequently, Niels Rattenborg of the MPIO, Alexandre Roulin of Unil, and their PhD student Madeleine Scriba, reexamined this question in a population of wild barn owls. They used an electroencephalogram (EEG) and movement data logger in conjunction with minimally invasive EEG sensors designed for use in humans, to record sleep in 66 owlets of varying age. During the recordings, the owlets remained in their nest box and were fed normally by their parents. After having their sleep patterns recorded for up to five days, the logger was removed. All of the owlets subsequently fledged and returned at normal rates to breed in the following year, indicating that there were no long-term adverse effects of eves-dropping on their sleeping brains.

Despite lacking significant eye movements (a trait common to owls), the owlets spent large amounts of time in REM sleep. “During this sleep phase, the owlets’ EEG showed awake-like activity, their eyes remained closed, and their heads nodded slowly”, reports Madeleine Scriba from the University of Lausanne (see video in the link below). Importantly, the researchers discovered that just as in baby humans, the time spent in REM sleep declined as the owlets aged.

In addition, the team examined the relationship between sleep and the expression of a gene in the feather follicles involved in producing dark, melanic feather spots. “As in several other avian and mammalian species, we have found that melanic spotting in owls covaries with a variety of behavioral and physiological traits, many of which also have links to sleep, such as immune system function and energy regulation”, notes Alexander Roulin from the University of Lausanne. Indeed, the team found that owlets expressing higher levels of the gene involved in melanism had less REM sleep than expected for their age, suggesting that their brains were developing faster than in owlets expressing lower levels of this gene. In line with this interpretation, the enzyme encoded by this gene also plays a role in producing hormones (thyroid and insulin) involved in brain development.

Although additional research is needed to determine exactly how sleep, brain development, and pigmentation are interrelated, these findings nonetheless raise several intriguing questions. Does variation in sleep during brain development influence adult brain organization? If so, does this contribute to the link between behavioral and physiological traits and melanism observed in adult owls? Do sleep and pigmentation covary in adult owls, and if so how does this influence their behavior and physiology? Finally, Niels Rattenborg from the Max Planck Institute for Ornithology in Seewiesen hopes that “this naturally occurring variation in REM sleep during a period of brain development can be used to reveal exactly what REM sleep does for the developing brain in baby owls, as well as humans.”