Newly discovered pulsar switches between emitting X-rays and emitting radio waves. It’s the first direct evidence of one kind of pulsar turning into another.

An international team of astronomers using CSIRO radio telescopes and other ground and space-based instruments has caught a small star called a pulsar undergoing a radical transformation, described today in the journal Nature.

“For the first time we see both X-rays and extremely fast radio pulses from the one pulsar. This is the first direct evidence of a pulsar changing from one kind of object into another – like a caterpillar turning into a butterfly,” said Dr Simon Johnston, Head of Astrophysics at CSIRO’s Astronomy and Space Science division. 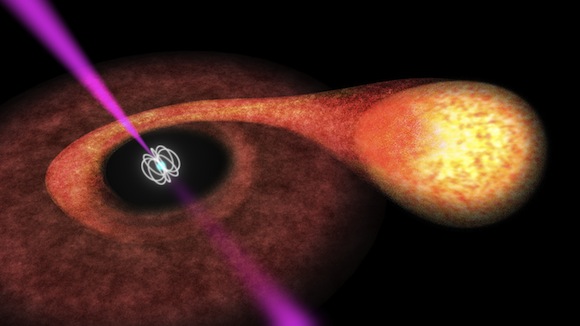 An artist’s impression of the pulsar and its companion star. Credit: ESA

The cosmic drama is being played out 18,000 light-years away, in a small cluster of stars (M28) in the constellation of Sagittarius.

The pulsar (called PSR J1824-2452I) has a tiny companion star, with about a fifth the mass of the Sun. Although small, the companion is fierce, pounding the pulsar with streams of matter.

Normally the pulsar shields itself from this onslaught, its magnetic field deflecting the matter stream into space.

But sometimes the stream swells to a flood, overwhelming the pulsar’s protective ‘force field’. When the stream hits the pulsar’s surface its energy is released as blasts of X-rays.

Eventually the torrent slackens. Once again the pulsar’s magnetic field re-asserts itself and fends off the companion’s attacks.

“We’ve been fortunate enough to see all stages of this process, with a range of ground and space telescopes. We’ve been looking for such evidence for more than a decade,” said Dr Alessandro Papitto, the Nature paper’s lead author. Dr Papitto is an astronomer of the Institute of Space Studies (ICE, CSIC-IEEC) of Barcelona.

The pulsar and its companion form what is called a ‘low-mass X-ray binary’ system. In such a system, the matter transferred from the companion lights up the pulsar in X-rays and makes it spin faster and faster, until it becomes a ‘millisecond pulsar’ that spins at hundreds of times a second and emits radio waves. The process takes about a billion years, astronomers think.

In its current state the pulsar is exhibiting behaviour typical of both kinds of systems: millisecond X-ray pulses when the companion is flooding the pulsar with matter, and radio pulses when it is not.

“It’s like a teenager who switches between acting like a child and acting like an adult,” said Mr John Sarkissian, who observed the system with CSIRO’s Parkes radio telescope. 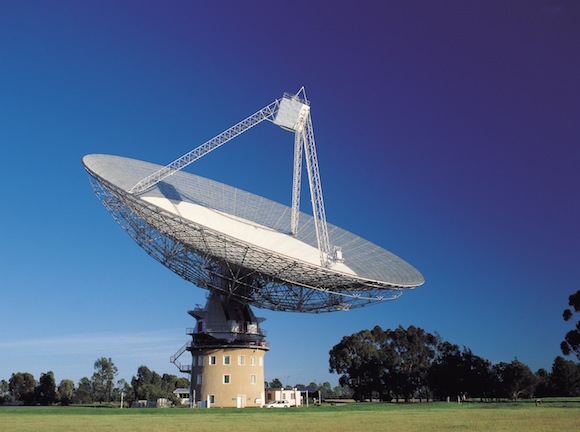 “Interestingly, the pulsar swings back and forth between its two states in just a matter of weeks.”

The pulsar was initially detected as an X-ray source with the European Space Agency’s INTEGRAL satellite. X-ray pulsations were seen with another satellite, ESA’s XMM-Newton; further observations were made with NASA’s Swift. NASA’s Chandra X-ray telescope got a precise position for the object.
Then, crucially, the object was checked against the pulsar catalogue generated by CSIRO’s Australia Telescope National Facility, and other pulsar observations. This established that it had already been identified as a radio pulsar.

The source was detected in the radio with CSIRO’s Australia Telescope Compact Array, and then re-observed with CSIRO’s Parkes radio telescope, NRAO’s Robert C. Byrd Green Bank Telescope in the USA, and the Westerbork Synthesis Radio Telescope in The Netherlands. Pulses were detected in a number of these later observations, showing that the pulsar had ‘revived’ as a normal radio pulsar only a couple of weeks after the last detection of the X-rays.