The most distant galaxy yet

It’s the most distant, and therefore the earliest, yet discovered. It’s seen as it was just 700 million years after the Big Bang. 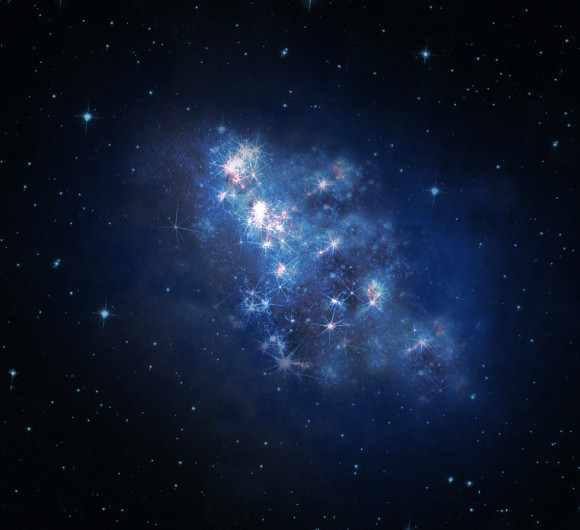 University of Texas at Austin astronomer Steven Finkelstein has led a team that has discovered and measured the distance to the most distant galaxy yet found. The galaxy is seen as it was at a time just 700 million years after the Big Bang. While observations with NASA’s Hubble Space Telescope have identified many other candidates for galaxies in the early universe, including some that might perhaps be even more distant, this galaxy is the farthest and earliest whose distance is definitively confirmed with follow-up observations from the Keck I telescope, one of a pair of the world’s largest earthbound telescopes. The result are published in the Oct. 24 issue of the journal Nature. 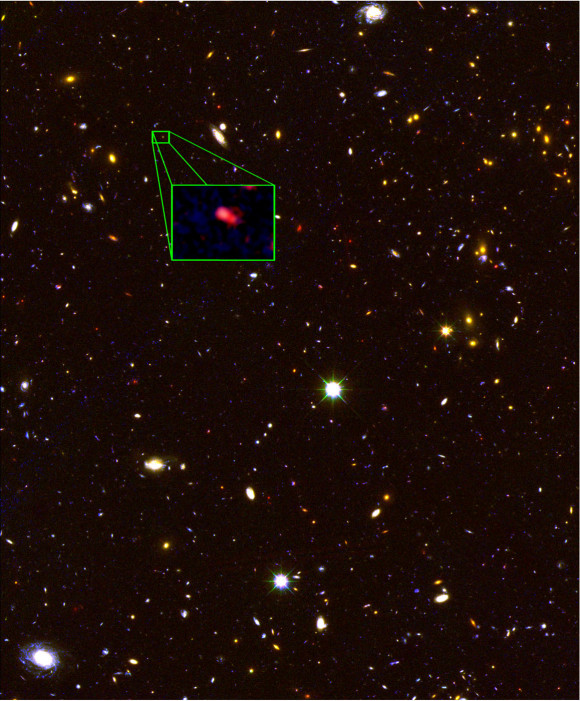 This image from the Hubble Space Telescope CANDELS survey highlights the most distant galaxy in the universe with a measured distance, dubbed z8_GND_5296. The galaxy’s red color alerted astronomers that it was likely extremely far away and, thus, seen at an early time after the Big Bang. A team of astronomers measured the exact distance using the Keck I telescope with the new MOSFIRE spectrograph. They found that this galaxy is seen at about 700 million years after the Big Bang, when the universe was just 5% of its current age of 13.8 billion years. (Image credit: V. Tilvi, Texas A&M University; S.L. Finkelstein, University of Texas at Austin; C. Papovich, Texas A&M University; CANDELS Team and Hubble Space Telescope/NASA.)

“We want to study very distant galaxies to learn how galaxies change with time, which helps us understand how the Milky Way came to be,” Finkelstein said.

That’s what makes this confirmed galaxy distance so exciting, because “we get a glimpse of conditions when the universe was only about 5 percent of its current age of 13.8 billion years,” said Casey Papovich of Texas A&M University, second author of the study.

Astronomers can study how galaxies evolve because light travels at a certain speed, about 186,000 miles per second. Thus when we look at distant objects, we see them as they appeared in the past. The more distant astronomers can push their observations, the farther into the past they can see.

The devil is in the details, however, when it comes to making conclusions about galaxy evolution, Finkelstein points out. “Before you can make strong conclusions about how galaxies evolved, you’ve got to be sure you’re looking at the right galaxies.”

This means that astronomers must employ the most rigorous methods to measure the distance to these galaxies, to understand at what epoch of the universe they are seen.

Finkelstein’s team selected this galaxy, and dozens of others, for follow-up from the approximately 100,000 galaxies discovered in the Hubble CANDELS survey (of which Finkelstein is a team member). The largest project in the history of Hubble, CANDELS used more than one month of Hubble observing time.

The team looked for CANDELS galaxies that might be extremely distant, based on their colors from the Hubble images. This method is good, but not foolproof, Finkelstein says. Using colors to sort galaxies is tricky because more nearby objects can masquerade as distant galaxies.

So to measure the distance to these potentially early universe galaxies in a definitive way, astronomers use spectroscopy — specifically, how much a galaxy’s light wavelengths have shifted toward the red end of the spectrum over their travels from the galaxy to Earth, due the expansion of the universe. This phenomenon is called “redshift.”

The team used Keck Observatory’s Keck I telescope in Hawaii, one of the largest optical/infrared telescopes in the world, to measure the redshift of the CANDELS galaxy designated z8_GND_5296 at 7.51, the highest galaxy redshift ever confirmed. The redshift means this galaxy hails from a time only 700 million years after the Big Bang.

Keck I was fitted with the new MOSFIRE instrument, which made the measurement possible, Finkelstein said. “The instrument is great. Not only is it sensitive, it can look at multiple objects at a time.” He explained that it was the latter feature that allowed his team to observe 43 CANDELS galaxies in only two nights at Keck, and obtain higher quality observations than are possible anywhere else.

Researchers are able to accurately gauge the distances of galaxies by measuring a feature from the ubiquitous element hydrogen called the Lyman alpha transition, which emits brightly in distant galaxies. It’s detected in nearly all galaxies that are seen from a time more than one billion years from the Big Bang, but getting closer than that, the hydrogen emission line, for some reason, becomes increasingly difficult to see.

Of the 43 galaxies observed with MOSFIRE, Finkelstein’s team detected this Lyman alpha feature from only one. “We were thrilled to see this galaxy,” Finkelstein said. “And then our next thought was, ‘Why did we not see anything else? We’re using the best instrument on the best telescope with the best galaxy sample. We had the best weather — it was gorgeous. And still, we only saw this emission line from one out of our sample of 43 observed galaxies, when we expected to see around six. What’s going on?'”

The researchers suspect they may have zeroed in on the era when the universe made its transition from an opaque state in which most of the hydrogen gas between galaxies is neutral to a translucent state in which most of the hydrogen is ionized (called the Era of Re-ionization). So it’s not necessarily that the distant galaxies aren’t there. It could be that they’re hidden from detection behind a wall of neutral hydrogen, which blocks the Lyman alpha signal the team was looking for.

Though the astronomers detected only one galaxy from their CANDELS sample, it turned out to be extraordinary. In addition to its great distance, the team’s observations showed that the galaxy z8_GND_5296 is forming stars extremely rapidly — producing stars at a rate 150 times faster than our own Milky Way galaxy. This new distance record-holder lies in the same part of sky as the previous record-holder (redshift 7.2), which also happens to have a very high rate of star-formation.

“So we’re learning something about the distant universe,” Finkelstein said. “There are way more regions of very high star formation than we previously thought…. There must be a decent number of them if we happen to find two in the same area of the sky.”

In addition to their studies with Keck, the team also observed z8_GND_5296 in the infrared with NASA’s Spitzer Space Telescope. Spitzer measured how much ionized oxygen the galaxy contains, which helps pin down the rate of star formation. The Spitzer observations also helped rule out other types of objects that could masquerade as an extremely distant galaxy, such as a more nearby galaxy that is particularly dusty.

The team is hopeful about their future prospects in this area. The University of Texas at Austin is a founding partner of the 25-meter diameter Giant Magellan Telescope (GMT), soon to begin construction in the mountains of Chile. This telescope will have nearly five times the light gathering power of Keck, and will be sensitive to much fainter emission lines, as well as even more distant galaxies. Although the current observations are beginning to pin down when re-ionization occurred, more work is needed.

“The process of re-ionization is unlikely to be very sudden,” Finkelstein said. “With the GMT we will detect many more galaxies, pushing our study of the distant universe even closer to the Big Bang.”

Other team members include Bahram Mobasher of the University of California, Riverside; Mark Dickinson of the National Optical Astronomy Observatory; Vithal Tilvi of Texas A&M; and Keely Finkelstein and Mimi Song of UT-Austin.

Via McDonald Observatory/University of Texas, Austin