The discoverers of Pluto’s two tiniest moons are inviting the public to help select names for the new moons.

By tradition, the moons of Pluto have names associated with Hades and the underworld. Beginning today, people can vote by visiting: https://plutorocks.seti.org

“The Greeks were great storytellers and they have given us a colorful cast of characters to work with,” said Mark Showalter, Senior Research Scientist at the Carl Sagan Center of the SETI Institute in Mountain View, California. He and the teams of astronomers who made the discoveries will select two names based on the outcome of the voting.

Until now, these small moons have been referred to as, simply, “P4” and “P5”. Like Pluto’s three other moons, Charon, Nix and Hydra, they need to be assigned names derived from Greek or Roman mythology. 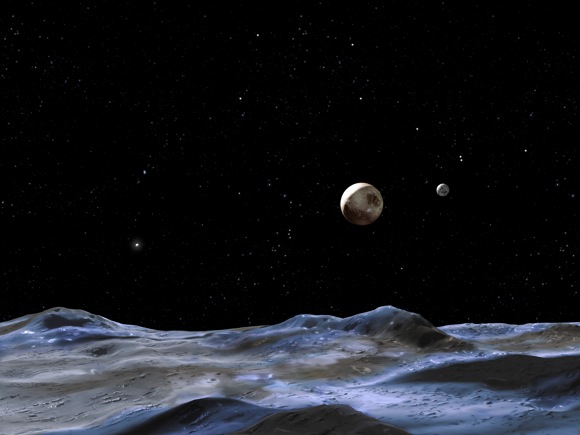 The artist’s concept above shows the Pluto system from the surface of one of the candidate moons. The other members of the Pluto system are just above the moon’s surface. Pluto is the large disk at center, right. Charon, the system’s only confirmed moon, is the smaller disk to the right of Pluto. The other candidate moon is the bright dot on Pluto’s far left. Click image for full resolution. Image credit: NASA, ESA and G. Bacon (STScI)

Visitors to the web site will also be able to submit write-in suggestions. These will be reviewed by the team and could be added to the ballot. Voting will end Feb. 25, 2013. The final names will be announced after their formal approval by the International Astronomical Union.

P4 was discovered in 2011 in images taken by the Hubble Space Telescope. P5 was discovered a year later during a more intensive search for previously unseen objects orbiting the distant, dwarf planet. The moons are only 20 to 30 km (15 to 20 miles) across. Currently, Pluto is receiving special scrutiny by astronomers, because NASA’s New Horizons spacecraft is slated to arrive there in July 2015. 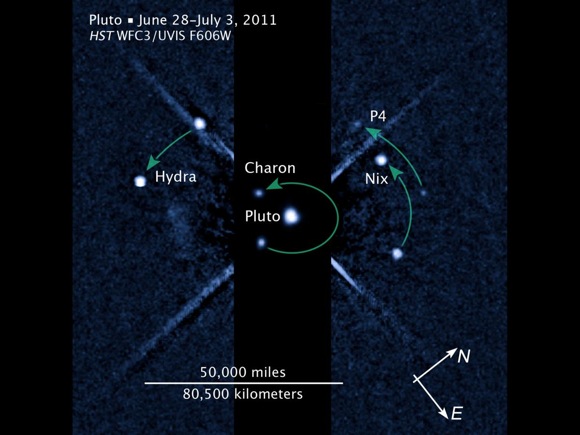 A Google+ Hangout is scheduled on February 11 at 11 am PT with two of the scientists involved in the discovery. Mark Showalter is from the SETI Institute, and Hal Weaver is a researcher at the Johns Hopkins University Applied Physics Laboratory in Laurel, Maryland. Questions from the viewers will be taken during the event using Twitter (hashtag #PlutoRocks), the SETI Institute Facebook page and the Google hangout.

The mission of the SETI Institute is to explore, understand and explain the origin, nature and prevalence of life in the universe. We believe we are conducting the most profound search in human history – to know our beginnings and our place among the stars.