Voyager spacecraft discovered this moon in 1989, but since then it’s been an elusive target. With new techniques to suppress Neptune’s glare, Naiad is found again.

Neptune’s tiny innermost moon, Naiad, has now been seen for the first time since the cameras on the Voyager 2 spacecraft discovered it in 1989. Dr. Mark Showalter, a senior research scientist at the SETI Institute in Mountain View, California, announced the result today (October 8, 2013) in Denver, Colorado, at the annual meeting of the Division for Planetary Sciences of the American Astronomical Society. He and collaborators also released a dramatic new image of Neptune’s puzzling rings and ring-arcs, which were first imaged by Voyager. 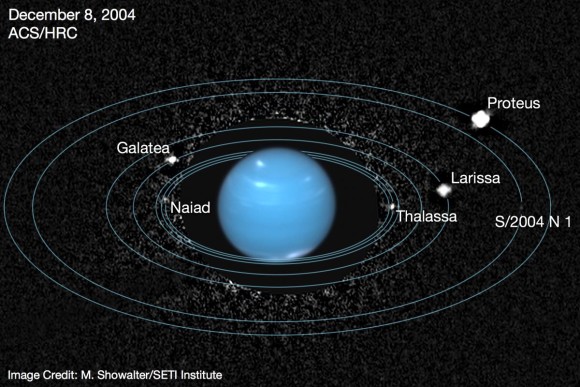 “Naiad has been an elusive target ever since Voyager left the Neptune system,” said Dr. Showalter. From Earth, Neptune is 2 million times brighter than Naiad, and the two are separated by only one arcsecond. “This is equivalent to the width of a human hair from 50 feet away,” noted collaborator Lissauer.

The team of astronomers needed to develop new techniques to suppress Neptune’s glare. Naiad was finally revealed, moving across a sequence of eight images taken by the Hubble Space Telescope during December 2004.

Strangely, Naiad appears to have veered significantly off course. The astronomers are puzzled by the fact that Naiad is now far ahead of its predicted orbital position. They wonder whether gravitational interactions with one of Neptune’s other moons may have caused it to speed up, although the details remain mysterious. Further observations will be needed in order to understand Naiad’s motion.

Click here to see a relatively recent list of all known moons of planets in our solar system. 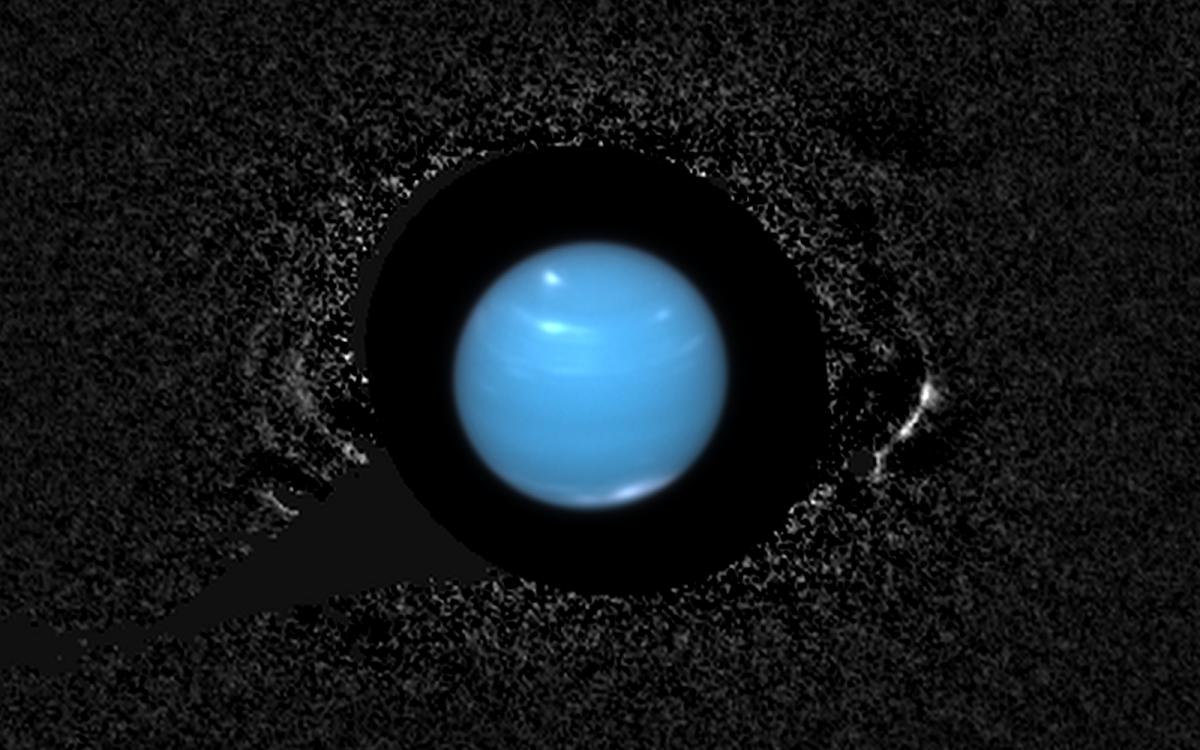 View larger. | Neptune’s slender rings are seen with remarkable clarity in this composite image taken by the Hubble Space Telescope in 2004. Astronomers only recently developed the image processing techniques needed to suppress the planet’s intense glare and make this view possible. This image is composed of 26 individual exposures, which have been combined to produce the equivalent of a single 95-minute exposure. Image and caption via SETI Institute.

In addition to its moons, Neptune hosts a family of faint rings and ring-arcs. Voyager 2 first imaged the rings in 1989. The Hubble Space Telescope obtained images of the rings in 2004, which are only now revealed due to new processing techniques by astronomers. As seen in the archival Hubble images, Neptune’s ring arcs have been changing slowly in the years since their discovery. Whereas Voyager saw a set of four closely-spaced arcs, the leading two arcs have been fading away and are completely absent from the newest Hubble images. The trailing arcs, however, are essentially unchanged. This system of arcs is probably confined by the gravitational effects of the nearby moon Galatea, but the reason for the long-term changes is unknown.

Showalter and his collaborators had previously announced the discovery of a tiny moon of Neptune in July. That moon, which is no more than 20 km (12 miles) across, goes by the provisional designation “S/2004 N 1.” The new results reported today are based on further analysis of the same images, which were all obtained by Hubble between 2004 and 2009. Although 100-km Naiad is much larger than the moon announced in July, it orbits much closer to Neptune and so has proven to be much harder to detect.

“It is always exciting to find new results in old data,” Showalter remarked. “We keep discovering new ways to push the limit of what information can be gleaned from Hubble’s vast collection of planetary images.”