Researchers at Brown University have shown that some Martian valleys appear to have been caused by runoff from orographic precipitation.

Valley networks branching across the Martian surface leave little doubt that water once flowed on the Red Planet. But where that ancient water came from — whether it bubbled up from underground or fell as rain or snow — is still debated by scientists. A new study by researchers at Brown University puts a new check mark in the precipitation column. 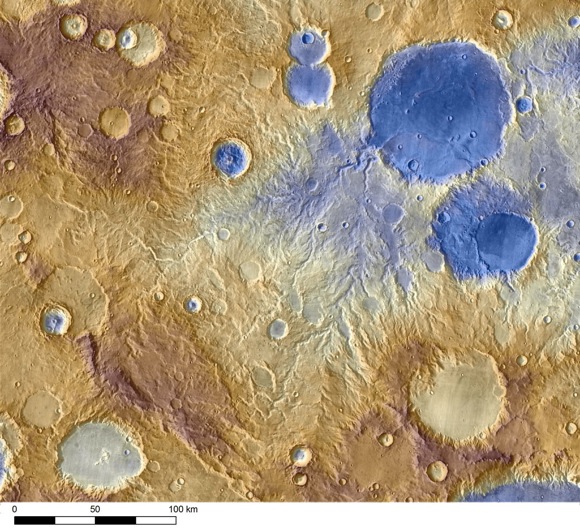 Mars from the Odyssey spacecraft. Water-carved valleys on Mars appear to have been caused by runoff from precipitation, likely meltwater from snow. Early Martian precipitation would have fallen on mountainsides and crater rims. Credit: Images from NASA

The study finds that water-carved valleys at four different locations on Mars appear to have been caused by runoff from orographic precipitation — snow or rain that falls when moist prevailing winds are pushed upward by mountain ridges. The new findings are the most detailed evidence yet of an orographic effect on ancient Mars and could shed new light on the planet’s early climate and atmosphere.

A paper describing the work has been accepted by Geophysical Research Letters and published online in June.

Kat Scanlon, a geological sciences graduate student at Brown, led the research and is well-acquainted with the orographic effect. She did graduate work in meteorology in Hawaii, which is home to a quintessential orographic pattern. Moist tropical winds from the east are pushed upward when they hit the mountains of Hawaii’s big island. The winds lack the kinetic energy to reach the mountain summit, so they dump their moisture on the eastern side of the island, making parts of it a tropical jungle. The western side, in contrast, is nearly a desert because it sits in a rain shadow cast by the mountain peak.

Scanlon thought similar orographic patterns might have been at play on early Mars and that the valley networks might be an indicator. “That’s what immediately came to mind in trying to figure out if these valleys on Mars are precipitation related,” she said.

The researchers, including Jim Head, professor of geological sciences, started by identifying four locations where valley networks were found along tall mountain ridges or raised crater rims. To establish the direction of the prevailing winds at each location, the researchers used a newly developed general circulation model (GCM) for Mars. The model simulates air movement based on the gas composition scientists think was present in the early Mars atmosphere. Next, the team used a model of orographic precipitation to determine where, given the prevailing winds from the GCM, precipitation would be likely to fall in each of the study areas.

Their simulations showed that precipitation would have been heaviest at the heads of the densest valley networks. “Their drainage density varies in the way you would expect from the complex response of precipitation to topography,” Scanlon said. “We were able to confirm that in a pretty solid way.”

The atmospheric parameters used in the GCM are based on a new comprehensive general circulation model that predicts a cold climate, so the precipitation modeled in this study was snow. But this snow could have been melted by episodic warming conditions to form the valley networks, and indeed some precipitation could have been rain during this period, Scanlon and Head say. 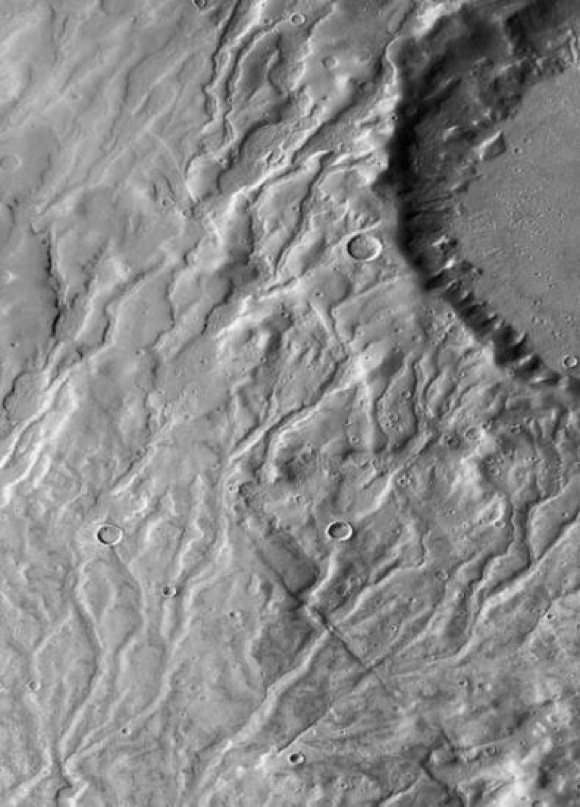 From Mars Reconnaissance Orbiter | Additional modeling might determine how fast Martian snow could have melted and whether snowmelt alone could have carved the valleys.

“The next step is to do some snowmelt modeling,” she said. “The question is how fast can you melt a giant snowbank. Do you need rain? Is it even possible to get enough discharge [to carve the valleys] with just the snowmelt?”

With the knowledge from this study that precipitation was important in carving the valleys, the answers to those additional questions could provide important insight into the climate on Mars billions of years ago.