Melting of Antarctic ice sheet may have contributed more to sea level rise than melting of the Greeland ice sheet some 100,000 years ago.

A new study that provides surprising details on changes in Earth’s climate from more than 100,000 years ago indicates that the last interglacial–the period between “ice ages”–was warmer than previously thought and may be a good analog for future climate, as greenhouse gases increase in the atmosphere and global temperatures rise.

The research findings also indicate that melting of the massive West Antarctic ice sheet may have contributed more to sea-level rise at that time than melting of the Greenland ice sheet.

The new results from the North Greenland Eemian Ice Drilling (NEEM) project were published in the Jan. 24 edition of Nature.

Members of the research team noted that they were working in Greenland during the summer of 2012 during a rare modern melt event similar to those discussed in the paper.

“We were quite shocked by the warm surface temperatures observed at the NEEM ice camp in July 2012,” said Dorthe Dahl-Jensen, of the University of Copenhagen, the NEEM project leader. 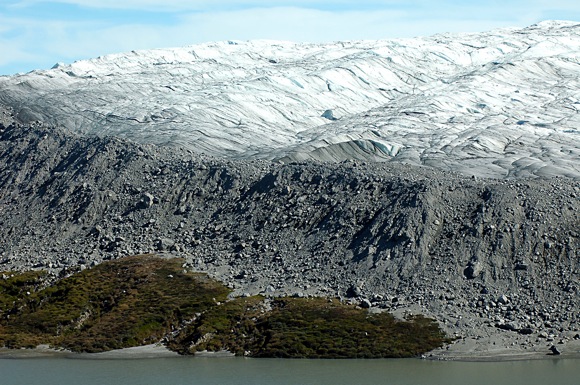 The edge of the Greenland ice sheet, near Kangerlussuaq, is shown. Credit: Peter West, NSF

“It was simply raining, and, just as during the Eemian period, meltwater formed subsurface ice layers. While this was an extreme event, the present warming over Greenland makes surface melt more likely, and the predicted warming over Greenland in the next 50-100 years will potentially have Eemian-like climate conditions.”

The project logistics for NEEM are managed by Denmark’s Centre for Ice and Climate. The Arctic Sciences Section in the National Science Foundation’s Division of Polar Programs manages the U.S. support for the project.

In addition to Denmark and the United States, researchers from Belgium, Canada, China, France, Germany, Iceland, Japan, the Netherlands, South Korea, Sweden, Switzerland and the United Kingdom are also partners in NEEM.

The research published this week shows that during the Eemian interglacial, the climate in North Greenland was about 8 degrees Celsius warmer than at present. Despite this strong warming signal during the Eemian–a period when the seas were roughly four to eight meters higher than they are today–the surface in the vicinity of NEEM was only a few hundred meters lower than its present level, which indicates that the Greenland ice sheet may have contributed less than half of the total sea rise at the time.

“The new findings reveal higher temperatures in Northern Greenland during the Eemian than paleo-climate models have estimated,” said Dahl-Jensen.

The research team estimated the Greenland ice sheet’s volume reduced by no more than 25 percent over 6,000 years. The rate of elevation change in the early part of the Eemian was high and the loss of mass from the Greenland ice sheet was likely on the the same order as changes observed during the last ten years.

“The good news from this study is that Greenland is not as sensitive as we thought to temperature increases in terms of disgorging ice into the ocean during interglacial periods,” said Dahl-Jensen. “The bad news is that if Greenland did not disappear during the Eemian, Antarctica, including the more dynamically unstable West Antarctica, must be responsible for a significant part of the 4-8 meters of sea-level rise.”

Jim White, director of the Institute of Arctic and Alpine Research at the University of Colorado, Boulder, and the lead U.S. investigator on the NEEM project, said that while three previous ice cores drilled in Greenland in the last 20 years recovered ice from the Eemian, the deepest layers were compressed and folded, making the data difficult to interpret.

With this study, although there was some folding of the lowest ice layers in the NEEM core, sophisticated ice-penetrating radar helped scientists sort out and interpret the individual layers to paint an accurate picture of the warming of Earth’s Northern Hemisphere as it emerged from the previous ice age.

“When we calculated how much ice melt from Greenland was contributing to global sea rise in the Eemian, we knew a large part of the sea rise back then must have come from Antarctica,” said White. “A lot of us had been leaning in that direction for some time, but we now have evidence that confirms that the West Antarctic ice sheet was a dynamic and crucial player in global sea rise during the last interglacial period.”

The intense surface melt in the vicinity of NEEM during the warm Eemian period was seen in the ice core as layers of re-frozen meltwater. Meltwater from surface snow had penetrated the underlying snow, where it re-froze. Such melt events during the past 5,000 years are very rare by comparison, confirming that the surface temperatures at the NEEM site during the Eemian were significantly warmer than today, said the researchers.

The Greenland ice core layers–formed over millennia by compressed snow–are being studied in detail using a big suite of measurements, including stable water isotope analysis that reveals information about temperature and moisture changes back in time. Lasers are used to measure the water stable isotopes and atmospheric gas bubbles trapped in the ice cores to better understand past variations in climate on a year-by-year basis–similar in some ways to a tree-ring record.

“It’s a great achievement for science to gather and combine so many measured ice core records to reconstruct the climate history of the past Eemian,” said Dahl-Jensen. “It shows what a great team of researchers we have assembled and how valuable these findings are.”