An anarchic region of star formation

The Danish 1.54-metre telescope has captured a striking image of NGC 6559, an object that showcases the anarchy that reigns when stars form inside an interstellar cloud.

NGC 6559 is a cloud of gas and dust located at a distance of about 5000 light-years from Earth, in the constellation of Sagittarius (The Archer). The glowing region is a relatively small object, just a few light-years across, in contrast to the one hundred light-years and more spanned by its famous neighbour, the Lagoon Nebula (Messier 8, eso0936). Although it is usually overlooked in favour of its distinguished companion, NGC 6559 has the leading role in this new picture.

The gas in the clouds of NGC 6559, mainly hydrogen, is the raw material for star formation. When a region inside this nebula gathers enough matter, it starts to collapse under its own gravity. The centre of the cloud grows ever denser and hotter, until thermonuclear fusion begins and a star is born. The hydrogen atoms combine to form helium atoms, releasing energy that makes the star shine. 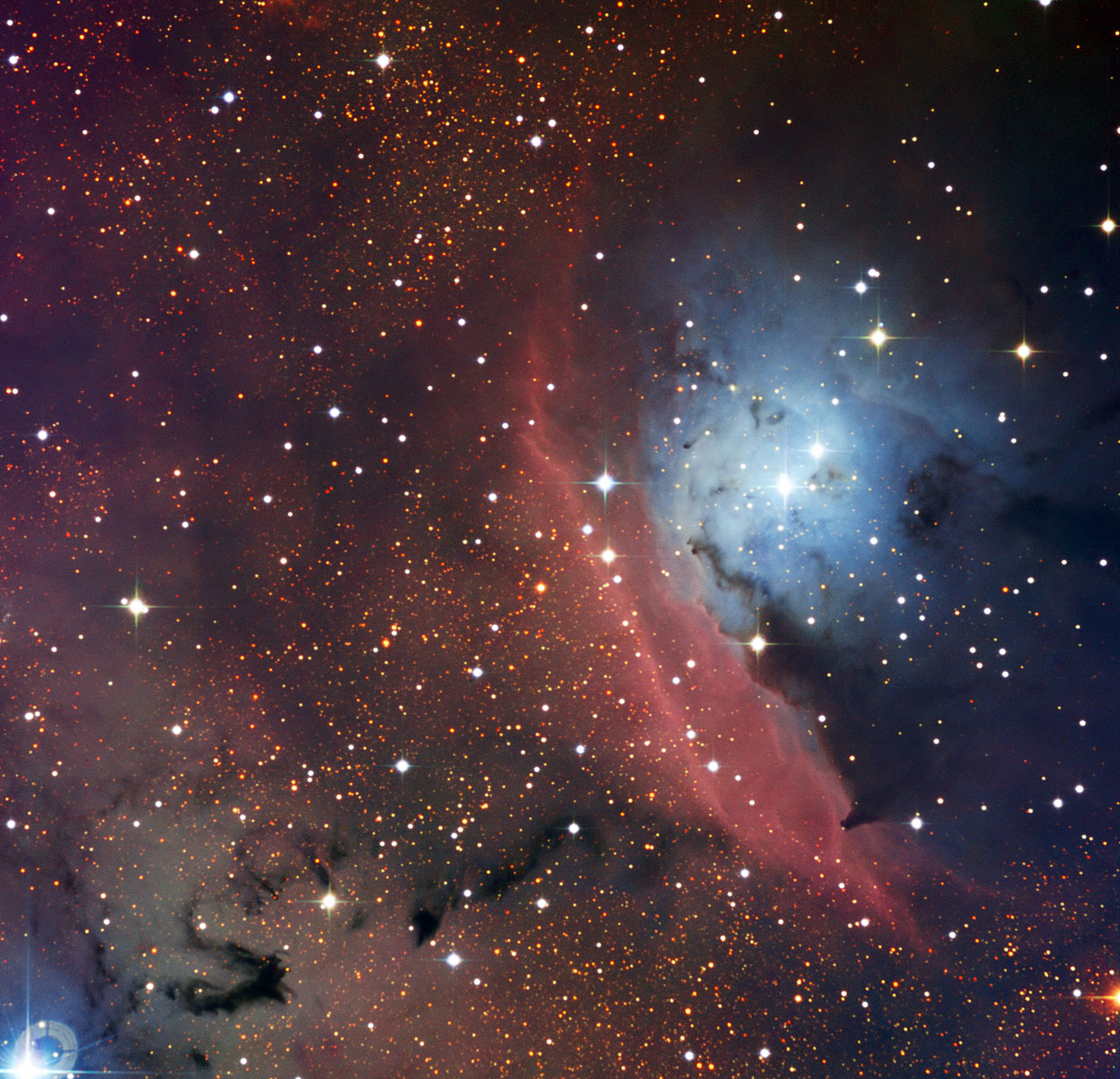 These brilliant hot young stars born out of the cloud energise the hydrogen gas still present around them in the nebula [1]. The gas then re-emits this energy, producing the glowing threadlike red cloud seen near the centre of the image. This object is known as an emission nebula.

But NGC 6559 is not just made out of hydrogen gas. It also contains solid particles of dust, made of heavier elements, such as carbon, iron or silicon. The bluish patch next to the red emission nebula shows the light from the recently formed stars being scattered — reflected in many different directions — by the microscopic particles in the nebula. Known to astronomers as a reflection nebula, this type of object usually appears blue because the scattering is more efficient for these shorter wavelengths of light [2]. 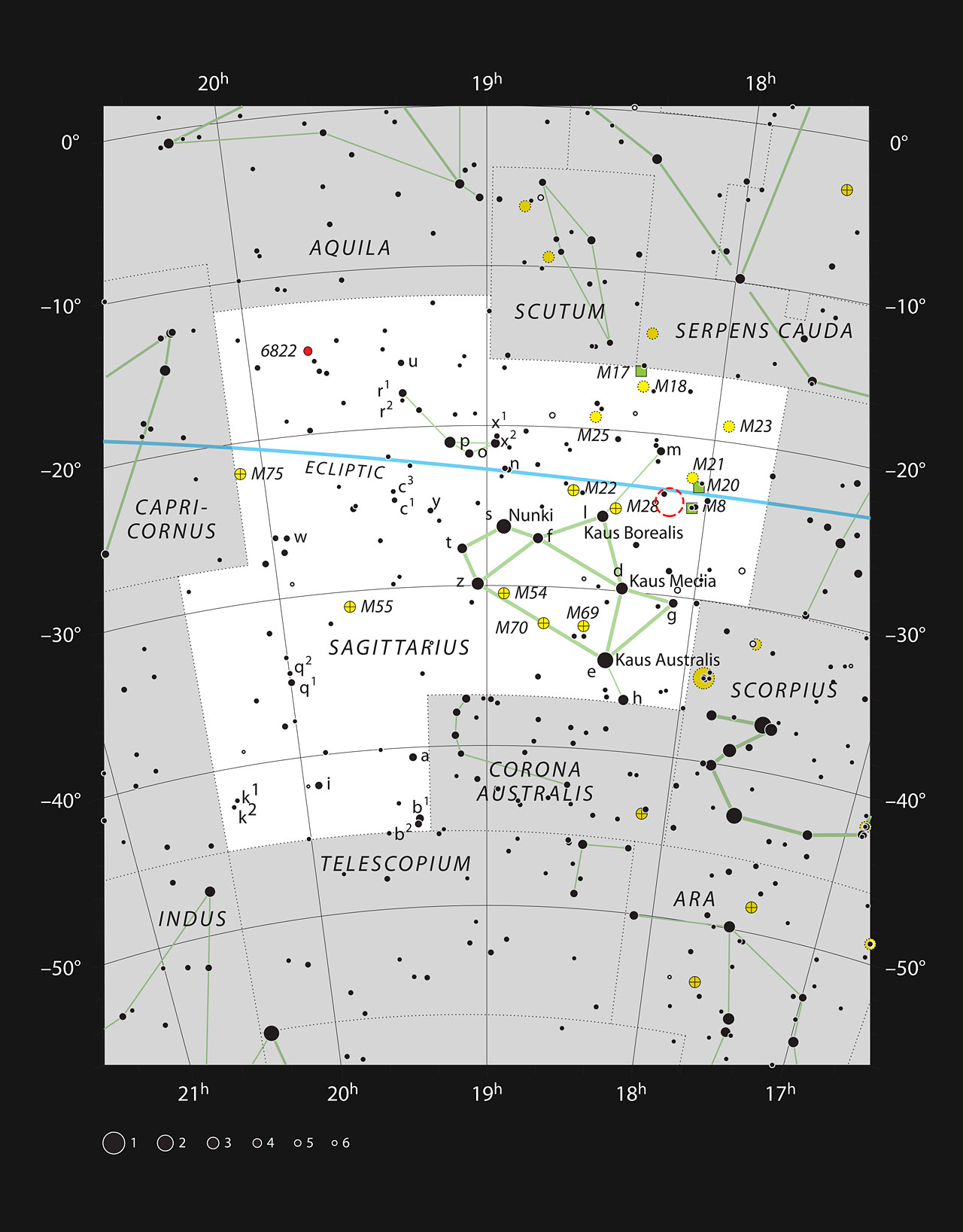 View Larger | This chart shows the location of the glowing clouds of the star formation region NGC 6559 in the constellation of Sagittarius (The Archer). All the stars visible with the unaided eye on a clear and dark night are shown and NGC 6559 is marked with a red circle. It is a small part of a rich region of star formation and glowing clouds.

In regions where it is very dense, the dust completely blocks the light behind it, as is the case for the dark isolated patches and sinuous lanes to the bottom left-hand side and right-hand side of the image. To look through the clouds at what lies behind, astronomers would need to observe the nebula using longer wavelengths that would not be absorbed.

The Milky Way fills the background of the image with countless yellowish older stars. Some of them appear fainter and redder because of the dust in NGC 6559.

This eye-catching image of star formation was captured by the Danish Faint Object Spectrograph and Camera (DFOSC) on the 1.54-metre Danish Telescope at La Silla in Chile. This national telescope has been in use at La Silla since 1979 and was recently refurbished to turn it into a remote-controlled state-of-the-art telescope.
Notes

[1] These young stars are usually of spectral type O and B, with temperatures between 10 000 and 60 000 K, which radiate huge amounts of high energy ultraviolet light that ionises the hydrogen atoms.

[2] Rayleigh scattering, named after the British physicist Lord Rayleigh, happens when light is scattered off particles of material that are much smaller than the wavelength of the light. It is much more effective for short wavelengths of light, that is, wavelengths corresponding to the blue end of the visible spectrum, so the result is a bluish diffuse light. This is the same mechanism that explains the blue colour of the daytime cloud-free sky.