“Certainly we would love it to be a couple of magnitudes brighter right now, but it’s doing just fine. I’d say it’s still on course to become a very eye-catching object.” – Karl Battams, Naval Research Lab in Washington, D.C.

Anticipation is building as Comet ISON approaches the sun for a close encounter on Thanksgiving Day (Nov. 28). No one knows if the blast of solar heating ISON receives will turn it into one of the finest comets in years–or destroy the icy visitor from the outer solar system.

Astronomer Carey Lisse, the head of NASA’s Comet ISON Observing Campaign, hopes that “every telescope on Earth will be trained on the comet in October and November.” He may get his wish. As September comes to an end, amateur astronomers around the world are already monitoring the comet.

“Comet ISON is approaching Mars in the pre-dawn sky,” explains Lisse. “It is invisible to the naked eye, but within reach of backyard telescopes.”

“I photographed Comet ISON on Sept. 15th using my 4-inch refractor,” reports astrophotographer Pete Lawrence of Selsey UK. “The comet’s tail is nicely on view even through this relatively small instrument.” See image

In Aquadilla, Puerto Rico, astronomer Efrain Morales Rivera saw the comet on Sept. 14th “rising above the canopy of the rain forest just minutes before sunrise. I used a 12-inch telescope,” he says. See image

In mid-September, the approaching comet was glowing like a star of 14th magnitude. That’s dimmer than some forecasters expected.

“Certainly we would love it to be a couple of magnitudes brighter right now,” says researcher Karl Battams of the Naval Research Lab in Washington, D.C.,”but it’s doing just fine. I’d say it’s still on course to become a very eye-catching object.”

Battams is especially optimistic about NASA’s twin STEREO probes and the NASA/ESA Solar and Heliospheric Observatory. Those three spacecraft are equipped with coronagraphs–devices which cover the blinding disk of the sun to produce an artificial eclipse. The coronagraphs will be able to see ISON at its brightest when it is making its closest approach to the sun on Thanksgiving. 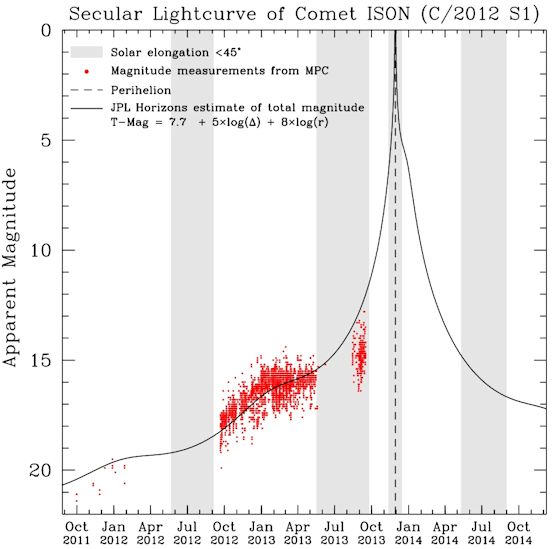 The light curve of Comet ISON. The solid line traces the predicted brightness of the comet; red dots are actual observations. These data were compiled by Matthew Knight of the Lowell Observatory on Sept. 20, 2013.

If ISON survives its brush with solar fire, sky watchers on Earth might get an eye-full as well.

Based on the latest images, internationally known comet expert John Bortle says “ISON appears likely to survive the in-bound leg of its journey all the way to the Sun. It will probably brighten more slowly than all the early hype led the public to believe. Nevertheless, Comet ISON should very briefly become exceptionally bright, at least rivaling the planet Venus in the hours preceding its closest approach to the sun.”

After Thanksgiving (Nov 28th), Comet ISON will emerge from the sun’s glare well-positioned for observers in the northern hemisphere. The comet’s tail will likely be visible to the naked-eye in both the morning and evening sky throughout December 2013.

A useful point of comparison is Comet Lovejoy, which put on a grand show after it brushed the sun in 2011. People in the southern hemisphere still remember the comet’s tail stretching halfway across the night sky. Judging from the brightness of Comet ISON, Matthew Knight of the Lowell Observatory believes that “ISON is likely a few times bigger than Lovejoy was, so I am optimistic that Comet ISON will become an impressive sungrazer.”

Because this is Comet ISON’s first visit to the inner solar system, no one can say for sure what will happen. Comets are unpredictable, capable of fizzling at the last minute even after months of promising activity.

Battams, who has been “burned” before by sungrazing comets, cautions that “at no point in the next couple of months are we going to know if Comet ISON will survive or not until we actually observe it with our own eyes.”

“Observations from amateur astronomers are really valuable pieces of the puzzle for us,” adds Battams. “They help us to see how the comet is evolving.”

The NASA Comet ISON Observing Campaign aims to get as many eyes on ISON as possible. To learn how you can help, visit https://isoncampaign.org.