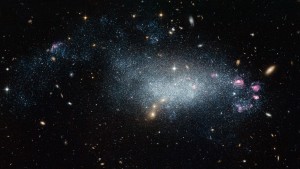 This image from the NASA/ESA Hubble Space Telescope shows a cosmic oddity, dwarf galaxy DDO 68. This ragged collection of stars and gas clouds looks at first glance like a recently-formed galaxy in our own cosmic neighbourhood. But, is it really as young as it looks?

Thank you! Your submission has been received!
Oops! Something went wrong while submitting the form.
END_OF_DOCUMENT_TOKEN_TO_BE_REPLACED