A new paradigm shift for the infant universe

A new paradigm for understanding the earliest eras in the history of the universe has been developed.

A new paradigm for understanding the earliest eras in the history of the universe has been developed by scientists at Penn State University. Using techniques from an area of modern physics called loop quantum cosmology, developed at Penn State, the scientists now have extended analyses that include quantum physics farther back in time than ever before — all the way to the beginning. The new paradigm of loop quantum origins shows, for the first time, that the large-scale structures we now see in the universe evolved from fundamental fluctuations in the essential quantum nature of “space-time,” which existed even at the very beginning of the universe over 14 billion years ago. The achievement also provides new opportunities for testing competing theories of modern cosmology against breakthrough observations expected from next-generation telescopes. The research will be published on 11 December 2012 as an “Editor’s Suggestion” paper in the scientific journal Physical Review Letters. 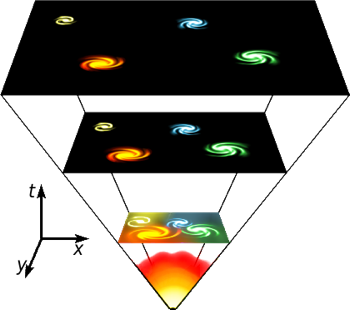 According to the Big Bang theory of how our universe began, our entire cosmos expanded from an extremely dense and hot state and continues to expand today. The graphic scheme above is an artist’s concept illustrating the expansion of a portion of a flat universe. Image via Wikimedia Commons.

“We humans always have yearned to understand more about the origin and evolution of our universe,” said Abhay Ashtekar, the senior author of the paper. “So it is an exciting time in our group right now, as we begin using our new paradigm to understand, in more detail, the dynamics that matter and geometry experienced during the earliest eras of the universe, including at the very beginning.” Ashtekar is the Holder of the Eberly Family Chair in Physics at Penn State and the director of the university’s Institute for Gravitation and the Cosmos. Coauthors of the paper, along with Ashtekar, are postdoctoral fellows Ivan Agullo and William Nelson.

The new paradigm provides a conceptual and mathematical framework for describing the exotic “quantum-mechanical geometry of space-time” in the very early universe. The paradigm shows that, during this early era, the universe was compressed to such unimaginable densities that its behavior was ruled not by the classical physics of Einstein’s general theory of relativity, but by an even more fundamental theory that also incorporates the strange dynamics of quantum mechanics. The density of matter was huge then — 1094 grams per cubic centimeter, as compared with the density of an atomic nucleus today, which is only 1014 grams.

In this bizarre quantum-mechanical environment — where one can speak only of probabilities of events rather than certainties — physical properties naturally would be vastly different from the way we experience them today. Among these differences, Ashtekar said, are the concept of “time,” as well as the changing dynamics of various systems over time as they experience the fabric of quantum geometry itself.

No space observatories have been able to detect anything as long ago and far away as the very early eras of the universe described by the new paradigm. But a few observatories have come close. Cosmic background radiation has been detected in an era when the universe was only 380-thousand years old. By that time, after a period of rapid expansion called “inflation,” the universe had burst out into a much-diluted version of its earlier super-compressed self. At the beginning of inflation, the density of the universe was a trillion times less than during its infancy, so quantum factors now are much less important in ruling the large-scale dynamics of matter and geometry.

Observations of the cosmic background radiation show that the universe had a predominantly uniform consistency after inflation, except for a light sprinkling of some regions that were more dense and others that were less dense. The standard inflationary paradigm for describing the early universe, which uses the classical-physics equations of Einstein, treats space-time as a smooth continuum. “The inflationary paradigm enjoys remarkable success in explaining the observed features of the cosmic background radiation. Yet this model is incomplete. It retains the idea that the universe burst forth from nothing in a Big Bang, which naturally results from the inability of the paradigm’s general-relativity physics to describe extreme quantum-mechanical situations,” Agullo said. “One needs a quantum theory of gravity, like loop quantum cosmology, to go beyond Einstein in order to capture the true physics near the origin of the universe.” 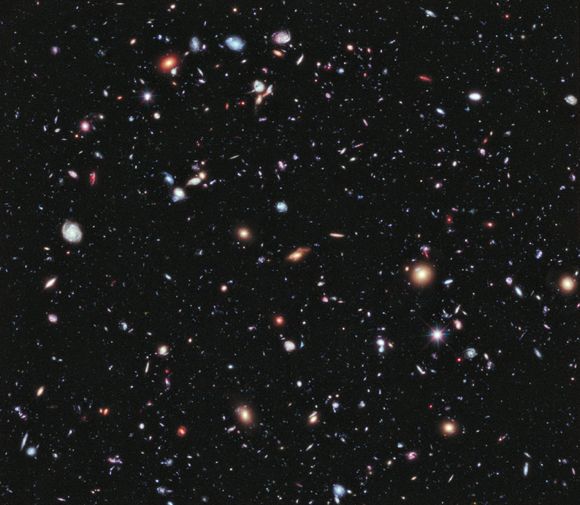 The Hubble eXtreme Deep Field shows the most distant part of space we’ve yet seen in optical light. It’s our deepest look yet back into the time of the very early universe. Released on September 25, 2012, the image compiled 10 years of previous images and shows galaxies from 13.2 billion years ago. Image credit: NASA; ESA; G. Illingworth, D. Magee, and P. Oesch, University of California, Santa Cruz; R. Bouwens, Leiden University; and the HUDF09 Team.

Earlier work with loop quantum cosmology in Ashtekar’s group had updated the concept of the Big Bang with the intriguing concept of a Big Bounce, which allows the possibility that our universe emerged not from nothing but from a super-compressed mass of matter that previously may have had a history of its own.

Even though the quantum-mechanical conditions at the beginning of the universe were vastly different from the classical-physics conditions after inflation, the new achievement by the Penn State physicists reveals a surprising connection between the two different paradigms that describe these eras. When scientists use the inflation paradigm together with Einstein’s equations to model the evolution of the seed-like areas sprinkled throughout the cosmic background radiation, they find that the irregularities serve as seeds that evolve over time into the galaxy clusters and other large-scale structures that we see in the universe today. Amazingly, when the Penn State scientists used their new loop-quantum-origins paradigm with its quantum-cosmology equations, they found that fundamental fluctuations in the very nature of space at the moment of the Big Bounce evolve to become the seed-like structures seen in the cosmic microwave background.

“Our new work shows that the initial conditions at the very beginning of the universe naturally lead to the large-scale structure of the universe that we observe today,” Ashtekar said. “In human terms, it is like taking a snapshot of a baby right at birth and then being able to project from it an accurate profile of how that person will be at age 100.”

“This paper pushes back the genesis of the cosmic structure of our universe from the inflationary epoch all the way to the Big Bounce, covering some 11 orders of magnitude in the density of matter and the curvature of space-time,” Nelson said. “We now have narrowed down the initial conditions that could exist at the Big Bounce, plus we find that the evolution of those initial conditions agrees with observations of the cosmic background radiation.”

The team’s results also identify a narrower range of parameters for which the new paradigm predicts novel effects, distinguishing it from standard inflation. Ashtekar said, “It is exciting that we soon may be able to test different predictions from these two theories against future discoveries with next-generation observational missions. Such experiments will help us to continue gaining a deeper understanding of the very, very early universe.”