A magnetar at the heart of our Milky Way

Radio astronomers are using a pulsar with a strong magnetic field to investigate a supermassive black hole at the center of our galaxy.

Astronomers have discovered a magnetar at the center of our Milky Way. This pulsar has an extremely strong magnetic field and enables researchers to investigate the direct vicinity of the black hole at the heart of the galaxy. An international team of scientists headed by the Max Planck Institute for Radio Astronomy in Bonn have, for the first time, measured the strength of the magnetic field around this central source and were able to show that the latter is fed by magnetic fields. These control the inflow of mass into the black hole, also explaining the x-ray emissions of this gravity trap. 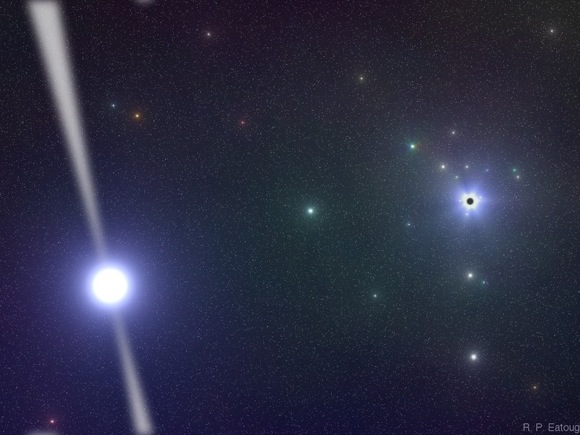 Artist’s impression of PSR J1745-2900, a pulsar with a very high magnetic field (“magnetar”) in direct vicinity of the central source of our Galaxy, a supermassive black hole of approximately 4 million times the mass of our sun. Measurements of the pulsar imply that a strong magnetic field exists in the vicinity around the black hole. Image credit: MPIfR/Ralph Eatough.

The discovery of a pulsar closely orbiting the candidate supermassive black hole at the center of the Milky Way (called Sagittarius A*, or Sgr A* in short) has been one of the main aims of pulsar astronomers for the last 20 years. Pulsars, those extremely precise cosmic clocks, could be used to measure the properties of space and time around this object, and to see if Einstein’s theory of General Relativity could hold up to the strictest tests.

Shortly after the announcement of a flaring X-ray source in the direction of the Galactic center by NASA’s Swift telescope, and the subsequent discovery of pulsations with a period of 3.76 seconds by NASA’s NuSTAR telescope, a radio follow-up program was started at the Effelsberg radio observatory of the Max Planck Institute for Radio Astronomy (MPIfR).

As soon as we heard about the discovery of regular pulsations with the NuSTAR telescope we pointed the Effelsberg 100-m dish in the direction of the Galactic centre”, says Ralph Eatough from MPIfR’s Fundamental Physics Research department, the lead author of the study. “On our first attempt the pulsar was not clearly visible, but some pulsars are stubborn and require a few observations to be detected. The second time we looked, the pulsar had become very active in the radio band and was very bright. I could hardly believe that we had finally detected a pulsar in the Galactic center!” Because this pulsar is so special, the research team spent a lot of effort to prove that it was a real object in deep space and not due to man-made radio interference created on Earth.

Additional observations were performed in parallel and subsequently with other radio telescopes around the world (Jodrell Bank, Very Large Array, Nançay). “We were too excited to sleep in between observations! We were calculating flux densities at 6am on Saturday morning and we could not believe that this magnetar had just turned on so bright.” says Evan Keane from the Jodrell Bank Observatory. Other collaborations worked at different telescopes (Australia Telescope/ATCA, Parkes and Green Bank Telescope). A research paper on the ATCA results by Shannon & Johnston appears in this week’s issue of the British journal MNRAS.

“The Effelsberg radio telescope was built such that it could observe the Galactic center. And 40 years later it detects the first radio pulsar there”, explains Heino Falcke, professor at Radboud Universiteit Nijmegen. “Sometimes we have to be patient. It was a laborious effort, but finally we succeeded.”

The newly found pulsar, labelled PSR J1745-2900, belongs to a specific subgroup of pulsars, the so-called magnetars. Magnetars are pulsars with extremely high magnetic fields of the order of 100 million (108) Tesla, about 1000 times stronger than the magnetic fields of ordinary neutron stars, or 100,000 billion times the Earth’s magnetic field. The emission from these objects is also known to be highly polarized. Measurements of the rotation of the plane of polarization caused by an external magnetic field (the so-called Faraday effect) can be used to infer the strength of the magnetic field along the line-of-sight to the pulsar. 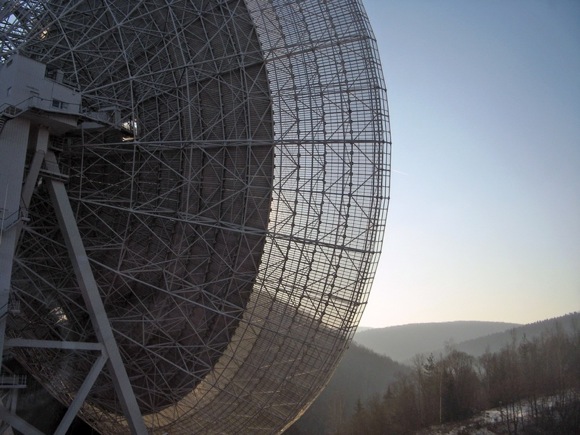 An ear in space: The 100-m Effelsberg radio telescope during regular observations of the Galactic Centre region for unidentified pulsars. The Galactic Centre is in the Sagittarius constellation, which is extremely close to the horizon in the southern direction, and is only visible for approximately 2 hours every day. Image credit: MPIfR/Ralph Eatough

“In order to understand the properties of Sgr A*, we need to comprehend the accretion of gas into the black hole”, says Michael Kramer, director at MPIfR and head of its Fundamental Physics research department. “However, up to now, the magnetization of the gas, which is a crucial parameter determining the structure of the accretion flow, remains unknown. Our study changes that by using the discovered pulsar to probe the strength of the magnetic field at the start of this accretion flow of gas into the central object.”

If this magnetic field caused by the ionized gas is accreted down to the event horizon it can also explain the radio through to X-ray emission long associated with the black hole itself. Also super strong magnetic fields at the black hole may suppress accretion, explaining why Sgr A* appears to be starving in comparison to supermassive black holes in other galaxies.

There is now convincing evidence that the center of our Galaxy harbors a super-massive black hole. Scientists at the Max Planck Institute for Extraterrestrial Physics in Garching and elsewhere have measured its mass very precisely but many properties are not yet understood. The discovery of the magnetar in its direct vicinity helps to explain some of the observations. Magnetars are a rare breed in the pulsar population (only 4 out of ~2000 pulsars known to date) suggesting there might indeed be a large population of pulsars in the Galactic center.

Why they have not been detected by previous pulsar surveys is not yet understood. It was thought that an extremely strong scattering of radio waves could be the reason but the discovery of PSR J1745-2900 seems to go against this idea. The scattering towards the Galactic center could be more complex and patchy, or may increase closer to the black hole in the center.

Unfortunately the newly found pulsar is still too distant from the black hole to accurately probe the space-time since its minimal orbital period amounts to ~500 years. Also magnetars are notoriously noisy and thus inaccurate clocks. “Ideally we would like to find faster spinning pulsars even closer to Sgr A* allowing more accurate timing”, says Ralph Eatough. “The new pulsar has considerably raised our hopes of this possibility for the future.”