A fast fish with a huge impact

In the Danube River, scientists have been observing a fish species conquering a new habitat and creating a totally new ecosystem while many plants and animals are being run off due to globalization.

Recent decades have seen massive changes to many river systems. To improve passage for ships, humans have been straightening, deepening, and reinforcing river banks and altered the natural flow regime. Water temperatures are also rising as a result of climate change. All of which provides perfect conditions for the round goby, a fish traditionally found in the lower stretches of the Danube and along the coasts of the Black Sea. Today, however, round goby has expanded its distribution range significantly and can now be found in the headwater of the Danube as well as in the Rhine, the Baltic Sea and the Laurentian Great Lakes in North America. 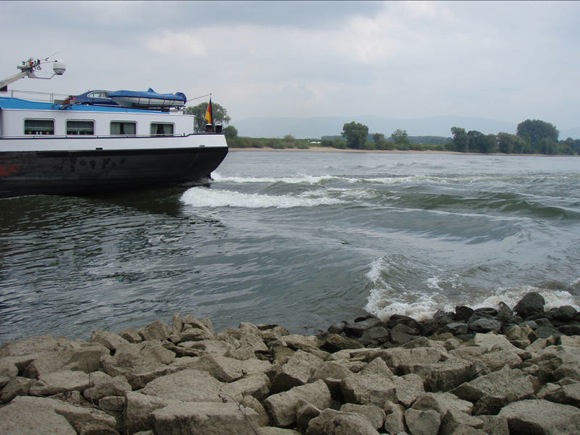 Scientists at the Technische Universität München (TUM) have teamed up with the Bavarian State Collection of Zoology (ZSM) to investigate the strategies the round goby uses to conquer new stretches of river and the impact on the ecosystem and existing food webs. This is the first comprehensive study of this nature has been carried out.

Colonization of the upper Danube

The scientists carried out their investigations in the Danube River. “Round goby reached the headwaters of the Danube only a few years ago. Probably as a stowaway in the ballast water of ships,” explains Jörg Brandner from the Chair of Aquatic Systems Biology. Since then, the fish has firmly established itself in the Bavarian Danube in an area stretching from the state border to the city of Regensburg.

In fall 2009, round goby reached the river stretch near the town of Bad Abbach and rapidly established a stable population. From here, individual fish moved further upstream. “In fall 2010 – just one year later – we found the first gobies in the river at Kelheim – around fifteen kilometers further upstream,” continues Brandner. “We did not expect the invasion to progress so rapidly.”

The pioneers are particularly strong and powerful goby individuals, able to consume a broad range of foods and thus can outperform other species in the competition for food. They gradually eliminate native fish species such as the barbel and European chub and already account for over 70 percent of the entire fish population in some areas of their preferred habitat (rip-rap banks).

The round goby is also reducing the diversity and abundance of invertebrates. Stoneflies, caddisflies and mayflies are particularly hard hit as they become the invaders’ preferred prey in their new habitat. “The round goby quickly adapts to new surroundings, for example by changing its feeding habits,” says Prof. Jürgen Geist from the Chair of Aquatic Systems Biology. “That’s what makes this species so successful.”

The round goby is not the only fish advancing upstream from the Black Sea. There are currently five different goby species from the lower Danube making their way up the river. And the fish are not the first new settlers. They have already been preceded by many exotic snails, mussels and freshwater amphipods, some even hailing from other continents, e.g. Asia. Like the gobies, a number of these animals dominate native species now.

“Round gobies that reach a certain body size feed on mollusks and freshwater amphipods. Native species are often easier prey as they have not developed defense strategies against the newcomers. And this benefits the non-native species,” explains Geist.

The goby invasion has led to a ‘novel ecosystem’ in the headwater of the Danube comprising previously unknown combinations of species. This is not unique to the Danube, however. There are similar developments in the Rhine and in the Great Lakes of North America. “What we are observing is a very flexible and robust network of different species that adapts itself perfectly to new environments,” says Geist. However, the consequences are serious, he adds: “Biodiversity is declining and once the original ecosystem is lost, we can never go back.”