A dance of supermassive black holes

This is the first time a pair of orbiting, supermassive black holes has been found in an ordinary galaxy. 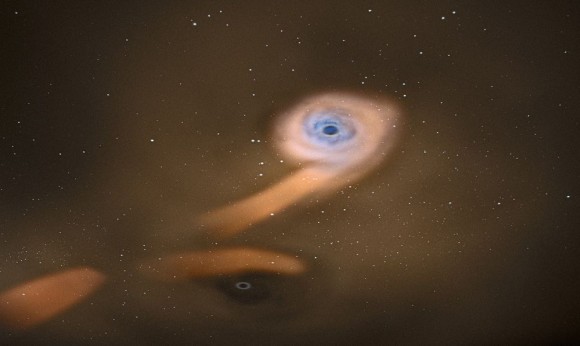 Artist’s impression of a pair of black holes. One of them is accreting the ‘debris’ of the disrupted star, while the second is temporarily interrupting the stream of gas toward the other black hole. Via ESA/C. Carreau/Max Planck Institute

An international research team has discovered a pair of supermassive black holes in orbit around one another, according to an announcement today (April 22, 2014) from the Max Planck Institute for Radio Astronomy in Bonn, Germany. This is the first time a pair of orbiting, supermassive black holes has been found in an ordinary galaxy. In the past they were found only in so-called active galaxies. This pair was discovered because the black holes ripped apart a star when ESA’s space observatory XMM-Newton happened to be looking in their direction.

The findings are published in the May 10 issue of the Astrophysical Journal, and appeared online today at the astrophysics preprint server.

To date, only a few candidates for close binary supermassive black holes have been found. All are in active galaxies where they are constantly ripping gas clouds apart, in the prelude to crushing them out of existence.

In the process of destruction, the gas is heated so much that it shines at many wavelengths, including X-rays. This gives the galaxy an unusually bright center, and leads to it being called active. The new discovery, reported by Fukun Liu from Peking University in China, and colleagues, is important because it is the first to be found in a galaxy that is not active.