A change of strategy is needed to save the Sumatran orangutans

The orangutans in Sumatra are in danger of becoming extinct.

Anthropologists from the University of Zurich now prove that only recently this ape species saw a drastic decrease in population. For the first time, they studied the genetic make-up and migratory behavior of these animals. Their discoveries: The population is divided into several sub-populations which do not stem from the destruction of the rainforest, but are of a geographic origin. While this population structure does not help preserve the species, there is some good news: Young male orangutans overcome its disadvantages with lengthy journeys. This finding leads to the discovery of a strategy that could save these critically endangered apes. 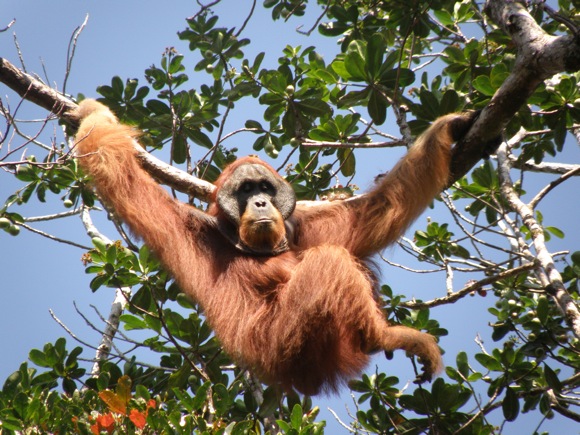 Orangutans are the only large apes in Asia and mainly live in trees. Today, the population only includes two species: While the Borneo orangutan populates large sections of the Southeast Asian island of Borneo, nowadays the Sumatran orangutan is only found at the northern tip of the island of Sumatra. With a current population of only around 6,600 Sumatra orangutans, a figure which is dropping rapidly and constantly, this species is on the Red List of Threatened Species.

When large areas of rainforest were cleared in Sumatra to make way for palm-oil plantations, once vast forestlands were reduced to a fraction of their former size and areas of forest that used to be conjoined became isolated from each other. Today, only a few dozen orangutans live in many of these forest areas – and they could be critically endangered for the longer term: After all, geographic isolation can lead to genetic depletion and inbreeding, both of which increase the risk of these small local populations dying out.

The study conducted by the anthropologists from the University of Zurich, which is to be published in the Journal of Heredity, affords the first insights into the genetic structure that are useful for the protection of the species and optimistic in this respect. The orangutan population in Sumatra is divided into several subpopulations that are not the result of industrial deforestation, but rather of a natural origin. The population structure was created and preserved over millennia through natural obstacles such as rivers and mountain ranges. 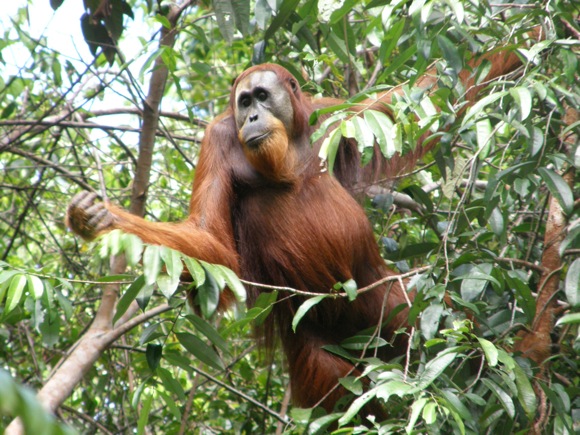 For the species to survive, it is essential for a genetic exchange to take place between the genetically differentiated subpopulations. Consequently, the authors of the study discovered several orangutans that were born in the region they were found in but whose fathers exhibited a characteristic genetic profile from a different part of the island – a clear indication that young male orangutans cover large distances to settle far away from the place where they were born. “By doing so, they are killing two birds with one stone,” deduces Alexander Nater, first author of the study. “On the one hand, they avoid the conflict with the dominant local males and thus increase their chances of breeding successfully; at the same time, however, they also reduce the risk of mating with closely related females from their place of birth.”

The distinct dominance structure of male Sumatran orangutans thus constitutes a natural mechanism that guarantees the genetic exchange between the various regions of the island over long distances. As Sumatra’s interior is forested up to high altitudes, the young male orangutans can negotiate mountain ranges and bypass large rivers in the source region. Thanks to their marked wanderlust, they also considerably reduce possible negative consequences of the habitat fragmentation caused by industrial deforestation. And this ultimately offers a glimmer of hope for the survival of this critically endangered ape species.

As another result, the authors were able to demonstrate that a dramatic decline in the orangutan population only took place very recently: “The animals from one of the areas studied on the west coast display a very high degree of genetic diversity,” explains Nater. “This is a clear indicator for a historically large population. As only around 400 orangutans currently live in the area, however, one can only assume that the population plummeted recently.”

In order to obtain the genetic information, the authors analyzed dung and hair samples from wild orangutans, which were collected all over the current distribution area in Sumatra. In order to cover the regions that are difficult to access and have extremely low numbers of the timid apes, they also worked with blood sample of animals that had been kept illegally as pets and confiscated later by the authorities. 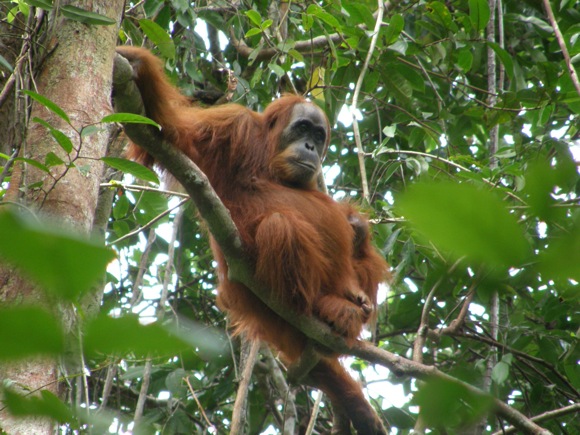 For the orangutans to actually be protected, a change in strategy is required in terms of species conservation: Whereas species protection campaigns in the past have primarily focused on the peat bog forests on the northwest coast of Sumatra, where both orangutans live in a high concentration and there is a sizeable interest in economic use, the new findings suggest specifically protecting the rainforest areas that play a key role in the genetic exchange on the island. With the new results, the focus should especially shift towards the less economically interesting, mountainous inland regions in northern Sumatra: “While these mountain forests are not home to any viable orangutan populations, their value for the protection of the species should by no means be underestimated as the roaming orangutan males traverse these habitats on the lookout for the next population and thus preserve the genetic diversity. These mountain regions should therefore take on a key role in the strategy to protect the Sumatran orangutans,” concludes anthropologist and co-author of the study Carel van Schaik