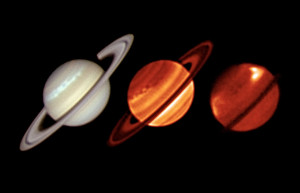 Thermal infrared images of Saturn from the VISIR instrument on ESO’s VLT (centre and right) and an amateur visible-light image (left) from Trevor Barry (Broken Hill, Australia) obtained on 19 January 2011 during the mature phase of the northern storm. The second image is taken at a wavelength that reveals the structures in Saturn’s lower atmosphere, showing the churning storm clouds and the central cooler vortex. The third image is sensitive to much higher altitudes in Saturn’s normally peaceful stratosphere, where we see the unexpected beacons of infrared emission flanking the central cool region over the storm.

Thank you! Your submission has been received!
Oops! Something went wrong while submitting the form.
END_OF_DOCUMENT_TOKEN_TO_BE_REPLACED