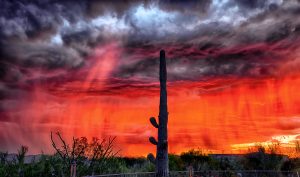 You are not allowed to view this content.
View at EarthSky Community Photos. | Our friend Eliot Herman in Tucson wrote this week: “I saw you did red rainbow. Check this out from this year’s monsoon, in late August. Red rain at sunset. Just an optical effect, of course, but it looked like we were on another world for the few minutes that it lasted. Amazing to see.” It is! Thank you, Eliot!
Red rainbow: https://earthsky.org/earth/what-makes-a-red-rainbow

Thank you! Your submission has been received!
Oops! Something went wrong while submitting the form.
END_OF_DOCUMENT_TOKEN_TO_BE_REPLACED