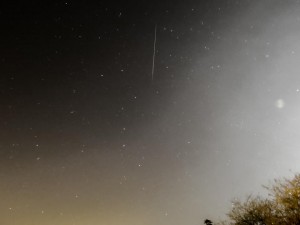 EarthSky Facebook friend Matt X. Smith said: Quadrantid captured from Paphos, Cyprus at roughly 1AM (continuous exposure shots for 2 hours)
Canon SX40HS; 4.3 MM, F/2.7, ISO 3800, TV- 25.5. Lots of darkening done in Adobe Lightroom and de-clarifying to get rid of the grain – had to tackle the brightness of the moon aswell (and street light pollution) plus added clarity to the meteor itself…was quite lucky to get it central … before editing the meteor was barely noticeable! I did also manage to capture one the night before that aswell but was much smaller but was directly into the zenith.

Thank you! Your submission has been received!
Oops! Something went wrong while submitting the form.
END_OF_DOCUMENT_TOKEN_TO_BE_REPLACED